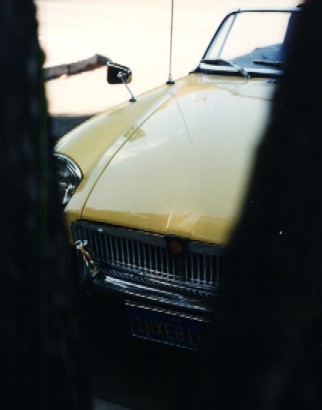 Yesterday night’s trip from Berkeley to Stockton was quite a drive. I went down took Highways 24 to 4 to 160 to 12 for the first time. On a clear day, one would be able to see the Delta waterways and rich agricultural land, but it was nighttime and when I got to 160 there was just so much fog. In some sections visibility was less than 100 feet, and for once I was feeling quite claustrophobic in the blankets of fog. But alas, we made it to Lodi, and then Stockton, when, just 3 miles away from home, I pressed the clutch in and attempted to upshift, when I hear grind.

Surprised, I think that perhaps I didn’t press the clutch all the way in, but soon it becomes apparent that it is requiring much greater clutch pedal travel than before to disengage the clutch. I am concerned, as if the problem is serious and access to the clutch itself is required, the engine would have to be removed, something I did not especially look forward to doing as I planned on going back to Stanford the following evening.

Sure enough, the clutch master reservoir was direly low, to my pleasure as the problem very well may be that air bubbles in the hydraulic line were the cause of the problems. I fetch brake fluid and a clear brake-bleeder tube from the local Pep Boys. It is fortuitous that I would be home in Stockton, as I left the ramps I purchased years ago there.

I drive Goldie up the ramps, connect the tube to the bleeder nipple on the clutch, and have my dad pump the clutch. Gosh, lots of air bubbles all right. By now my dad has pressed and released the clutch maybe a dozen times as I anxiously await to see clear bubble-less brake fluid. At last, here it comes.

I also lube Goldie’s chassis, adjust her brake, and put on a new fuel filter, as she was already up on ramps anyway and I could climb under the car for once. But the big moment comes, and we go for a drive. Yup, clutch disengages better than ever…

A grin comes to my face. So far, in diagnosing and fixing problems, I am two-for-two, much better than the 20% or so success rate with my former Migbee. There are not many greater pleasures than successful problem-solving, a friend once said, and boy was he right.