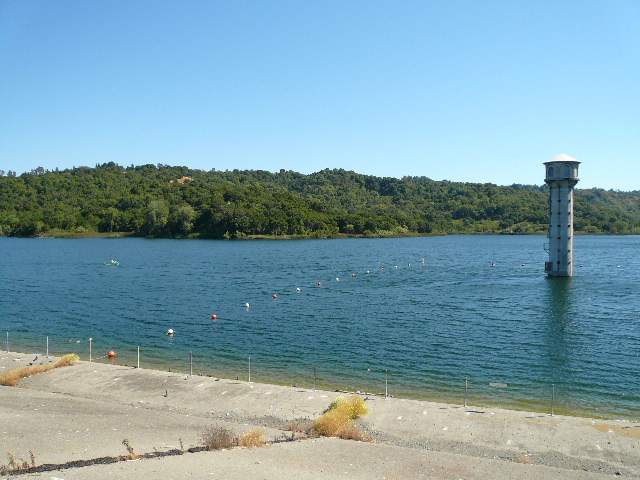 Though there is no climb in this ride nearly as long as those going up Mt. Diablo or Mt. Hamilton, there are plenty of rollers in this one–at least 4- or 5,000 feet of them! Starting at Fremont’s Central Park, go through the Palomares foothills, through Castro Valley, Moraga, and finally Lafayette. Going back largely the same way you came until you get to Niles in Fremont, continue through Niles, then Union City, and looping back through Fremont and Newark back to Central Park. The last 25 miles are totally flat! Route is below.

[Map of section from Fremont-Niles to Lafayette] (PDF) Courtesy of Russ Jones of the Tri-City Triathlon Club.

This ride started out as a 70+ training ride with the Tri-City Triathlon Club with Everitt, Russ, Sharon, Steve, Todd, and Tom, though I added on 20+ miles at the end to approximate a century.

I had extra motivation today because I’ve had a miserable last 12 hours with a bout of sinusitus, making it impossible to breathe out of one side of my nose during the night. I woke up many times, wishing that morning would roll around so I could get on the bike which would surely help clear things up.

Which it did! I can’t entirely explain it, but this has been a common experience of mine and other cyclists. My theories include cycling helps dilate one’s sinuses, and the cold + exercise helps thin one’s mucuous linings. Whatever the reason it felt so great to be able to breathe out of my nose again, even if there was still a little bit more resistance in one side of my nose than usual..

Speaking of the cold, this had to be the coldest morning I’ve ridden in during a year! I wore a fleece headband, fleece “lobster” gloves, and fleece socks, and my hands and feet were still very cold. But I didn’t mind too much as at least I could breathe!

And the day became sunny and confortable, if not really warm. We arrived at the Lafayette Reservoir before noon, only to be told by a ranger that bicyclists aren’t aloud to actually ride around the reservoir on Saturdays. No problem. There were a lot of people out on this winter day; I was very impressed.

Riding back, there was more climbing than I expected. In fact, there was plenty of climbing both ways, starting with Palomares, then up Redwood and Pinehurst, with at least an equal amount of climbing going in reverse. Going up Palomares from the north side, the last climb of the day, is surely harder than starting from the south side. Despite having the sinus infection I felt pretty good going up Palomares; this could be because I was conserving energy all day, though I’d like to think my climbing has been getting better since Mt. Hamilton and Mt. Diablo, plus other training rides!

I made up the last 20+ miles through Union City, Newark, and then Fremont as I went, just following my sense of direction until I got to Paseo Padre Parkway, which I was familiar with. Came within a block or two of the old place in Newark I lived in from mid-’99 to mid-’01. Those were great days, of a different era for me, but I am determined that this era will be even better!