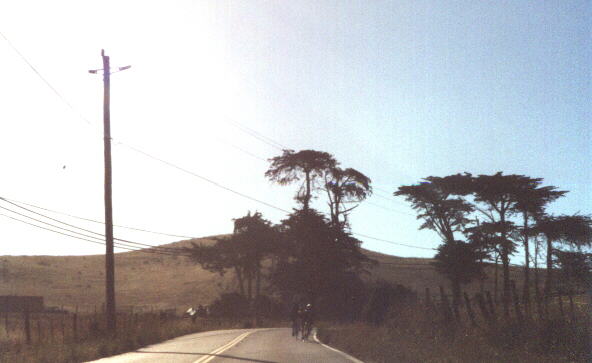 Time to ride the recumbent again. I had spent months away from the Reynolds Wishbone, having done the grueling Terrible Two double century on the Cannondale road bike, in addition to a social C-Ya ride of the annual MS Tour du Jour. But as I’d be riding my last double of 2000, the Knoxville Fall Classic on my recumbent, it’s time to start getting serious.

I was just in England a couple of days earlier, for eight days on vacation in which I got lots of rest. However, I did my first triathlon the day after I got back and just the day before this ride. The tri was short but was vigorous nonetheless. Hence I allowed myself to nap in the afternoon prior to the race and go to bed early. I woke up early enough to drive over to San Rafael by 7:20, and I’m on the road on my recumbent at 7:40 a.m. Only a little bit later than my original plan.

There was no on-day registration due to the ride organizers’ wish to limit ridership, as they felt enough people had signed up early already. Apparently, this was proclaimed to be the “Best Century in the U.S.” by Bicycling Magazine one year, so this was no surprise. Actually, that proclamation would be a surprise to me. But more on this later.

Anyhow, so this meant that I could not register and had to do the ride self-supported, but that’s what I planned on doing anyhow. I knew that I would have enough water and food for a century. Just one problem, though–when I took my “Camelback” out of Goldie’s trunk, it was entirely empty. Oh no, I didn’t seal it tight enough in the morning, and consequently, all 70 ounces leaked out. I only had 20 ounces of water in a water bottle.

Thinking that I’ll probably pass a convenience store or park during the ride, I wasn’t really worried about this at first. However, it would turn out to be a real problem.

It soon became apparent that we would be travelling in the middle of nowhere. Well, not really nowhere–first, down by the Pacific Ocean, and then through the yellow straw fields and hillsides of Marin County. Nothing here was very steep, and I was blazing by everyone, even on the short climbs. Having not ridden an organized century for awhile, I had forgotten the difference between century and double century riders. The former tend to be more recreational, while the latter more serious and faster, despite having to ride a longer distance.

So despite my lack of water and training, I went pretty hard for the first couple of hours until we got to a climb that would take ten minutes to climb. Nothing really steep, but this is where I started to bog down and dehydration started to set in. What a difference; went from feeling super strong to getting leg cramps. Not only was I getting passed by everyone now, I had to stop and stretch my legs several times. My legs and feet were really cramping….

Not only was I in physical pain, but psychologically, I was a bit bored. This was some of the most monotonous scenery I’ve seen in a while. Additionally, it stunk because of all the cows on the course. I could not believe that this century was so highly regarded by people.

And so it was after just riding for 4 hours I decided I’ll only be doing the metric (62 mile) route. Luckily, the 65 mile route had followed the 100 mile route until the 50 mile point, so I was able to switch into the 62 mile route then. After the 50 mile turnoff nothing was really steep at all, and so I headed back to the start/finish area with ease. I had cut the ride short, but I was satisfied–it was a good introductory training ride, and still had confidence I could get in shape for the Knoxville Double in three weeks.