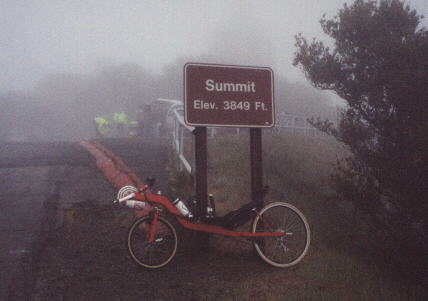 This is a very enjoyable ride through Alameda and Contra Costa Counties. Mt. Diablo is kind of long but until the last 100 feet is a really gentle climb. See route sheet and logbook entry (both below) for a description of it.

I was scheduled to go up to the top of Mt. Diablo with the Tri-City Triathlon Club. However, I waited for 20 minutes and nobody had showed up! “Maybe because it’s supposed to rain today,” I thought. Undaunted, as the morning weather was actually quite nice, I went off on my own, making up my own route to the mountain.

Once I reached Palomares Rd. I was in complete solitude. There is lots of wildlife, shade, ranches, and even a winery. A gradual climb then led to a swift descent.

Through Pleasanton, Dublin, San Ramon, and then Danville/Blackhawk I went, relying on my sense of direction to get me to Mt. Diablo. I made a few errant turns and then had to backtrack, but alas! To the east of Blackhawk Rd. was a sign pointing me to Mt. Diablo. Up we go!

Midway up Mt. Diablo, I hear my name called out from riders descending the mountain… it’s Russ and Steve from the Tri-City Tri Club! They had gone up after all, though they started at the In’n’Out burger place in San Ramon instead of starting from Fremont. We chatted for 20 minutes, and learned that Steve was going to do his first marathon in about 20 years, his last one being when he was a teenager! Inspiring stuff..

Slowly but surely I ascended the mountain, and stayed at the top for about 10 minutes. I overheard some foreign cyclists (perhaps from England?) and a local resident talk about the normal weather at the top. “I live right at the base of this mountain and have been up here many times,” said the local, “and usually it is much colder and windier up here. In fact, in winter there is usually snow up here. Perhaps as soon as 3 weeks from now!” It indeed was pretty mild for the top of the mountain but as I was cooling off already and it looked like storm clouds were coming in, I descended the mountain.

The descent is pretty nice, smooth and wide. Certainly more pleasant than the descent for Mt. Hamilton, which is quite treacherous. However, word had it that there were speedtraps in certain places on Mt. Diablo. No problem, I intended to take it safe and easy anyhow!

Back in Danville, I stopped at a Subway for a foot-long sandwich. It was then I got a call on my cell phone from one of my old biking buddies, Dan, whom I had not heard from in a while. How appropriate! He is now in North Carolina pursuing a MBA and Ph.D at Duke, but while he was living in the Bay Area we even rode the 1999 Davis Double together, a phenomenal ride. It was great to hear from him.

Back on the road, through Danville, San Ramon, and Dublin, I continued straight on through Pleasanton to Sunol via Foothill Rd. Showers started coming on down and it was starting to become late afternoon. I was getting a little cold, but as Foothill Rd. is so nice, I didn’t mind. Alameda County was named after the poplar- and cottonwood-lined streets of Spain (“los alamos”); I imagined this road was reminiscent of them.

Definitely a ride I’d do again!