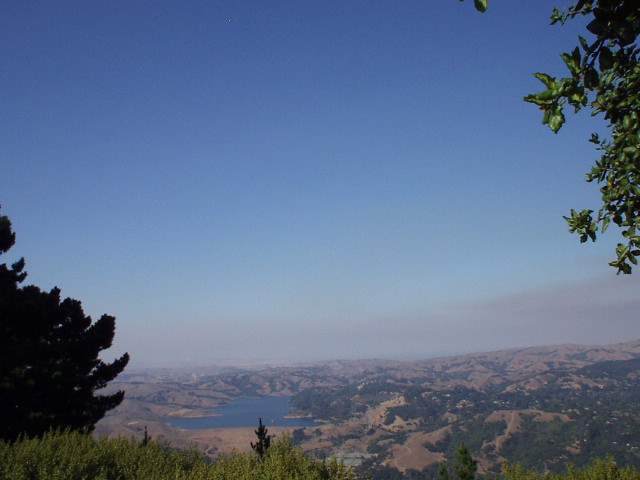 This ride is hilly! Starting at the old Fremont Niles train station, you ride through the lush Palomares hills to Castro Valley. After climbing through Moraga, you round the entire circumference of the San Pablo Reservoir, including the Three Big Bears–Mama, Papa, and Baby Bear. These are names of climbs that are neither steep or long. However, you then ascend back up through Berkeley’s Tilden Park and the Oakland Hills, some of which are steep and long! Upon reaching Castro Valley you may want to stop off and buy both more food and water before making the final pass through the Palomares Hills again. A beautiful and challenging ride!

This was the very first bike ride I did with the Tri-City Tri Club. It was interesting because 1) never did I know that this is one of the hardest rides they do during the year, and 2) it was lead by Harry Gretzke, who is known as “a good guy who doesn’t like to wait for anyone!”

Indeed, the pace he was going was so hard that, around the San Pablo Dam, everyone (particularly Soren) was like, “I was hoping for an easy pace, but you [Harry] are CRAZY!” And everyone else decided to cut the ride short (instead of the usual 100 miles)… except for Harry and me who carried on alone.

My legs were getting pretty fatigued by Mile 70 or so, particularly in the Oakland Hills, but in general I never fell more than 100 feet behind. Down in Castro Valley, we stopped at Safeway, where I bought (and ate) an entire box of girl scout cookies from girl scouts out in front, while Harry went in to buy a sandwich. We carried on from there with no problems.

Never did I realize just what I had done until days after the ride, in which my friend Nancy (who introduced me to the Tri-City Tri Club) reported, “At the swim meet, people were impressed with you, doing the entire route. They were like, ‘He even kept right up with Harry!'”

I was looking forward to this ride all week with the Tri-City Tri Club. It would be my hillest ride of the year up to this point, and good training for the upcoming Davis 300km Brevet.

However, it rained most of the latter part of the week, and indeed, it was raining so hard at 3:00 a.m. on the morning of the scheduled ride that the beating of the raindrops on my window had woken me up! But when I got up at 7:00 a.m., I looked outside, and… lots of blue sky!

Too bad, because it turned out to be a really nice day! So I went solo, taking it fairly easy, until I got to Berkeley. At the Three Bears themselves (Mama, Papa, and Baby Bear) around the San Pablo Reservoir, I went pretty hard. Then on Baby Bear I let up. Next thing I know, I had some company.

“You were riding really strong, but then you let up! Why?” he asked.

The guy then just looked at me like I was crazy, and after talking for a little about the upcoming rides we had planned (in my case, the Davis Brevet Series), he definitely must have thought I was crazy, because then all of a sudden he totally slowed down and let me go on ahead solo, even though I wasn’t speeding up or anything like that.

The rest of the ride was pleasant, although it seemed like I was doing this ride the long way, not following the Tri-City Tri Club route to the letter (I was going by memory). I say this because when I got back to Castro Valley, I had ridden close to 100 miles already. The unfortunate thing was I had only planned on riding 100 miles, and had only brought enough food for that distance (some peanut butter and jelly sandwiches and some crackers), so I was getting really hungry!

I carried on though, over Palomares, and was back home, with still a little daylight left. Home sweet home, with lots of food!