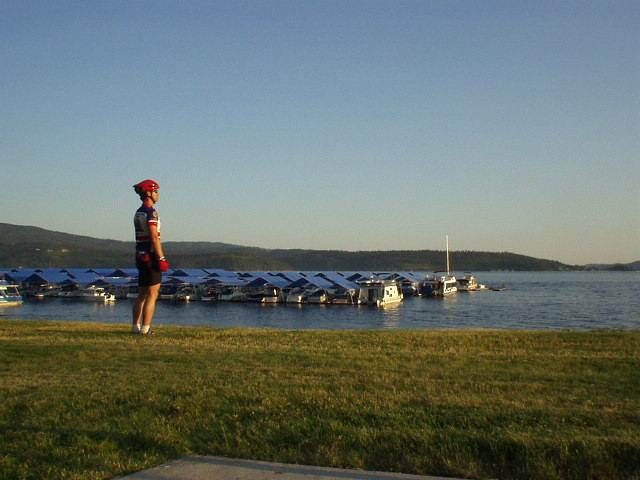 I went to race in picturesque Coeur d’Alene, Idaho, along with my triathlon buddies and to hear the infamous words “you are an Ironman” for the first time.

The following was written by my friend Tom of the Tri-City Tri Club:

It was a rough day out there. 97 degrees at the peak. An all-time high for the month of June in Coeur D’alene. Lots of leg cramps.

The race venue was awesome. The area and the lake are just spectacular. The locals were completely into the race. They had 4000 volunteers and a waiting list of folks who wanted to help. The crowds around town were huge. The bike course has a little of everything: Hills, flats, wind, rollers. It’s not as demanding as Canada, but the heat certainly made up for it. The run course is also beatiful. Most of it is along the lakeshore.

So how did we all do? Those who finished were thrilled to have completed the course on a day like that.

Russ had a bike crash early in the second loop. Apparently someone with a hose was spraying people with water, and he and Russ got tangled up. Russ went down, banged his hip, and busted his helmet. I don’t know much of the details, but I did speak with him briefly at the start of my run. He’s doing fine, but obviously his race was over.

Steve had a good swim and a really solid bike ride, but the heat caused his stomach to shut down. After two miles on the run he was dizzy and unable to drink. So he made the correct and sensible choice and pulled himself from the race.

Sharon had her usual excellent swim, a good effort on the bike, and then ran like the wind. She’s the only person I talked to who ran the entire marathon (except for the hill she walked with me). She had a great day.

I PR’d the swim, and through 80 miles was demolishing my bike PR. Then my old friend Uncle Crampy came to visit. I struggled through the rest of the bike, and walked most of the marathon. Even with a 6:15 marathon I still broke 15 hours, so I’m happy with the day.

Felix is an Ironman! He struggled through the swim, but made the cutoff with more than 20 minutes to spare. By the end of the bike he had almost caught up to me, even after stopping to fix a flat. His marathon experience was similar to mine. Lots of walking and cramps, but he also broke 15 hours.

Phil’s day was pretty similar to mine. He was happy with his swim time. The first loop of the bike course was at record setting pace, and then the cramps came. He struggled the rest of the day, and put in an effort truly worthy of the title Ironman. Oh, and just for giggles, he got into an all-out sprint down the finishers chute with a bikini-clad competitor. I would probably have just followed her, but that’s just me I guess.

All in all, an epic day up in Idaho. This venue is going to stick. I’d definitely do it again. Just hopefully on a cooler day.

First off, I’m really glad you are all right, Russ. I had seen an ambulance coming up while riding down by the lake, but didn’t realize you had gone down until Sharon told me later in the day. I was really scared when she mentioned you went unconscious but then she said the hospital released you a few hours later… big sigh of relief.

Secondly, just wanted to say that the presence of all of you who were there during IM week made the experience ever the more enjoyable and memorable, not just for the race but for the premeetings, parades, dinners, etc. So thanks!

Finally, I must say that the entire trip was an amazing experience despite the following indignities:

Memorable race for sure. Just don’t ask me if I’d do another Ironman again (at least not until I have fully recovered!) Kudos to everyone who even dared attempt such a crazy thing; I am amazed by you all!

At Ironman Coeur d’Alene, I met a volunteer named Deborah who really made me feel welcome. When she heard that I had come up to Coeur d’Alene alone to do a first Ironman, she and her family came out with signs to cheer me on during the race.

I was so touched by her support for a complete stranger that I submitted the following to HeroicStories.com. It was published on October 26, 2004.

The road to Idaho from California was over 1000 miles and a full day’s drive. I arrived on my 28th birthday (June 26, 2003), but I had been dreaming of this moment for years. Destination: Coeur d’Alene, with its glamorous lake and scenic roads. Goal: Ironman Coeur d’Alene, my first Ironman distance triathlon.

The race was a 2.4-mile swim, followed by a 112-mile bike ride and a 26.4-mile run. Participants arrived early to take care of pre-race logistics, including registration and racking our bicycles in a secured area.

In the registration tent I was instantly greeted by friendly volunteers. Minutes later, I was in front of a table to pick up my race number. Deborah Silva, the friendly woman behind the table was quick to make conversation. “Have you done any Ironmans before?” she inquired. Nope, this will be my first time, I replied.

We talked several minutes, and I confessed my inexperience, being a seasoned long-distance cyclist, a mediocre runner and worse swimmer—never having swum farther than a mile before.

Deborah asked if I had family to cheer me on. “Nope, came here alone,” I replied. We talked a while, and as I exited the registration tent, I thought, what a wonderful volunteer!

Ironwoman VolunteerThe next day I had just racked my bicycle and was exiting the bike corral when I heard, “Felix!” It was Deborah. “I knew you’d be here. I’ll be rooting for you during tomorrow’s race!” She showed me a big handmade sign: “Go #176”: my race number.

Sure enough, on race day Deborah and her family were at Mile 50 of the bicycle portion, holding her sign and cheering me on. It really lifted my spirits, after having been one of the last athletes to emerge from the water in the morning and now confronting 90-degree heat on the bike and run course.

As if her being out there all afternoon wasn’t enough, after darkness had fallen and I was just finishing the race, there she was! “You did it!” she said. It was almost 15 hours since the race had begun, an exhausting day for both of us. Yet she waited at the finish line to congratulate me, give me a hug, and take pictures so that I’d never forget this day, the day I had fulfilled the dream of doing my first Ironman.

Deborah made a complete stranger from a distant place feel welcome in Coeur d’Alene, and feel that he had accomplished something truly special in a race tougher than anything he had done before. She made this day extra memorable by going far beyond her duties as a race volunteer, offering encouragement to a young Californian. And sure enough, a few weeks later my pictures arrived in the mail!

Below is the official Ironman Athlete Video handed out to participants the day after the race. You can see me at 3:38-3:42 in the video.