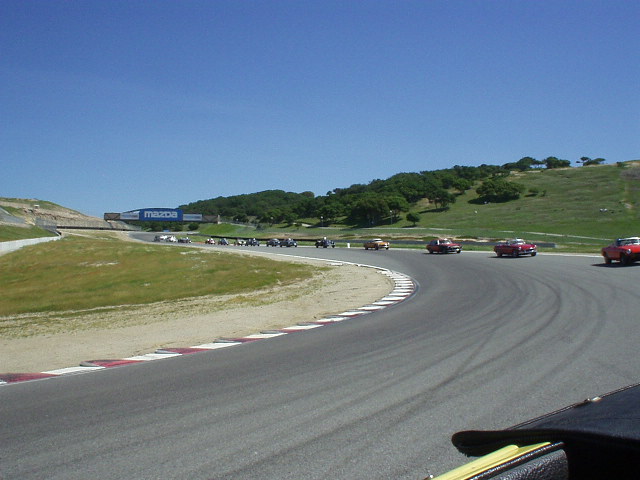 MG Historic Weekend at Laguna Seca Raceway. Got to drive around the track with Sharon in the passenger seat. Here are excerpts from an event report submitted by the president of the MG Owners’ Club, Dan Shockey:

Saurday was the bigger day for MGs at the track. According to Michael Romo, there were 95 MGs that went on the track tour at noon and an additional 25 that stayed in the corral. MGs continued to arrive throughout the afternoon. We estimate that 140 MGs participated in the club portion of the event on Saturday. There were also 33 MGs that were entered in the vintage races. Sunday was a good crowd, also, with the corral about half full. (Did anyone else count MGs? We will try to sort it out from the waiver form info, etc. I received RSVP’s from 180 MGs.)

The MG clubs had 86 rooms reserved at the Laurel Inn and may have ended up with more than that (depending on the relative numbers of cancellations and late comers.) The hospitality room at the Laurel Inn was well attended on both Friday and Saturday evenings. This turned out to be a surprizingly successful part of the event. (Thank you to the MG Owners Club who organized the room and purchased the drinks and snacks.)

We had 150 or so people at Tarpy’s RoadHouse for the Saturday evening dinner. The atmosphere, food and service were very appealing.

I truly believe that this was an unique opportunity to have all these historic figures and MGs in one place. Many people have asked about repeating the event. I believe that we – the several MG clubs involved – will discuss if there is a way to create a regular event at Laguna Seca that combines vintage racing with MG clubs participation. This would not have to involve HMSA though, of course, we would be very interested if they invited us back.

An all-British endeavor might make sense. This could be along the lines of the Portland, Oregon, all-British meet at Portland Intl Raceway or the combined club and vintage race event at Watkins Glen. We have proved the attraction of Laguna Seca in drawing folks from all over. Ideas are welcome.

We only had 7 to 8 weeks to throw the event together from when we first got wind of it in late January. Thank you for your patience as it was not as well organized as we would have liked. There was so much more we could have done if there was time to prepare. I believe we could have doubled the number of MGs present if there was more notice as well.

What a fun weekend!

Thats not really the corkscrew, but cool picture! ↩ Reply