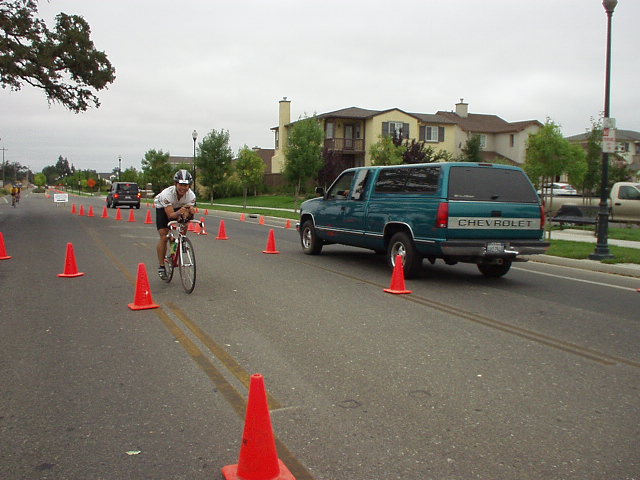 Two-thousand four was supposed to be an off year training-wise, and my goals for this race were modest: (1) To better my 2003 Ironman Coeur d’Alene time and (2) to actually run the entire marathon leg instead of walk, limp, or hobble.

Sharon drove me up to Santa Rosa the day before for registration, and we had dinner with Russ, his wife Yvonne and his son Brian at Carrows. Then, after watching a bit of the Bob Costas-described “dramatic” opening Olympic ceremonies, we retired for the night in our rather noisy Motel 6 room (which, according to Sharon, some people were cursing each other right outside our door at 11:00 p.m. and saying things like “Hey, that’s my car!”) that I nevertheless slept entirely through.

I got six hours of sleep—probably a new record for me before a race. We then carpooled with Russ early in the morning and were down by the Russian River for the first wave (out of three, staggered by five minutes) scheduled start of 6:45 a.m.

Excerpts from an email sent out after the race:

Another day off for me. (Last one in a while though, oh well) So here is the Vineman report.

Anyhow, so the race was on Saturday in Napa Valley, and I am done, done, done! I was pleased with how it went… my swim, as usual, was amoeba-ish (well, that is insulting to the amoebas, when in fact I was probably slower than them), and then I had a rather comical transition, in which I got confused and had to run back into transition to drop off my wetsuit bag, and then I couldn’t clip into my pedals (sand in my cleats), so I had to dismount and clean them. Not to mention, after… Mile 2, I already had some back pain during the bike leg, and I don’t think I was fully recovered from the double century the week before. But I got no flats and did a good job conserving energy on the bike, such that I was able to run the entire marathon leg afterwards without walking. In fact I was feeling better during the run than on the bike, not that I was Speedy Gonzales or the Road Runner or even Wile E. Coyote & friends, but it was a much different experience than last year’s Ironman (which, after going way too hard on the bike could have been best described as “death march”…)

Sharon came to watch, offer moral support, take pics, and in general just be a wonderful person (even drove me home), and there were a handful of spectators who were very supportive too (“go #34! Keep on smiling!”) And the announcer was the best. I’d come into the transition area, and the announcer would say things like, “And… it’s Felix, the pride of Fremont, California! Remember, folks, this is the ONLY Felix that’s in the race… GO, Felix!”

So I had a fun time. My race time was 13:13:xx, which is hardly record-breaking (99th out of 200 or so who entered), but at least good for top 100 (sounds better.) Russ finished too, which was more amazing, considering he had some gastro-intestinal issues even before the race began…

Now I can relax and be a bum again (not that I have much of a choice, as I can hardly walk.) Right now, I am baking a cake.