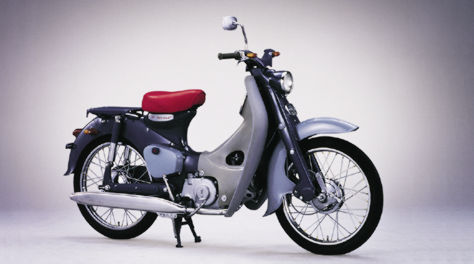 Along with daily chaos in the Middle East and $50 fill-ups for SUVs has come renewed interest in energy conservation. Despite modern technologies in the form of gas-electric powertrains, variable valve timing, cylinder-deactivation and other schemes, in this day and age, if your vehicle gets over 30 mpg, you are considered to be doing pretty well.

Can you believe, then, that in 1964, there was a popular mode of individual transport that could achieve over 160 miles per gallon?

Included in the book Leanings: The Best of Peter Egan from Cycle World by Peter Egan (another one of my favorite authors) is a gem of a tale entitled “Because It’s Small.” In this story, originally published in 1978, Peter decides to go on yet another motorcycle trip (he must have done hundreds), this time on his trusty 1964 Honda 50. Accompanying him is his friend John Oakey, who would ride side-by-side, or sometimes behind, as John was riding a Stella bicycle.

If this motorcycle/bicycle matchup seems about as fair as Mike Tyson vs. Bob Costas, keep in mind that 1) the Honda runs on a 50cc cylinder not much larger than a film canister, and 2) John is “an accomplished bicycle racer and has arms and legs that look like those bundles of steel cable that support the Golden Gate Bridge.” (The Honda also does not bite off people’s ears.)

Indeed, between Peter and John, “many bets had been made regarding the ability of the Honda to speed up- and downhill and of the bicycle to hold its pace on the level.”

Anyhow, to make a long story short, the two guys rode from a town near Madison, Wisconsin, to Pike’s Peak, Iowa (not Colorado), going out and back. The ride took 4 days. Peter hauled all of their gear including camping equipment, and yet John the cyclist was unsurprisingly the more tired one after each day of riding.

The first shocker of the trip came after the first day when they stopped off at a service station for a quick breather. Peter wrote,

My first gas stop, on the second morning, revealed that the Honda had guzzled no less than half a gallon during the 80 miles we’d covered the previous day, at a cost of 32 cents. That was 160 miles per gallon. John was numb. “Thirty-two cents? That’s crazy! Hell, I spent over a dollar on granola bars yesterday, just so I’d have enough energy to pedal this bike.”

The final energy tally at the end of the trip further confirmed this amazing gas mileage:

The ride had been exactly 303 miles long, over four days. The Honda used 1.8 gallons of leaded regular or premium, depending on what was available, which is 168.3 miles per gallon, at a cost of $1.13. With over 6,000 miles on the original engine, the Honda used no discernible amount of oil—the dipstick level was constant throughout the trip. John ate about $4 worth of granola bars while riding, plus a peach and three apples. There were no malfunctions of any kind on either machine.

Admittedly, the performance of the Honda 50 was perhaps a bit too meager for true touring for anyone except the hardiest adventurer, with a top speed of 45 mph. Never mind that it managed to take Peter to work all the time that summer, and an acquaintance of his rode another Honda 50 from Wisconsin to California and back—twice! That said, in the same book is another story entitled “The Flashback Express.” In that tale, Peter fixes a Honda Benly 150 Touring bike with 150cc, a top speed of 75 mph, and capable of 141 miles per gallon. Not bad at all.

Now, if Honda could achieve those stellar gas mileage figures with these two motorcycles in the 1960s, think of what could be done today in the 21st century if consumers and manufacturers were not constantly pushing for “bigger, faster, and heavier.” Kind of makes driving a behemoth SUV or sedan of today with 50% more horsepower than, say, a 205-hp 1984 Corvette seem a tad wasteful.

Actually, those little motorbikes make even the granola-loving cyclist seem a little energy inefficient, but at least that person is getting some exercise.