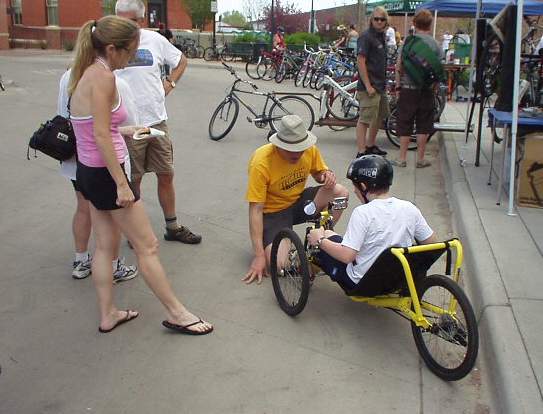 In Fort Collins—a bona fide bike-crazy town—it seems like bicycle events occur as frequently as Alberto Gonzales says “I do not recall.” Today was the Community Bike Fair in Old Town!

I met up with my friends Nick and Dana over there this morning in the hopes that we could find Nick a good deal on a new or used bike. While that didn’t happen, that was the only disappointment of the day, and a minor one at that.

First off, there was sufficient eye candy for even the most hard-core of cycling addicts, including novel two- (and three-) wheelers and gizmos you are unlikely to find at most “normal” bike shops, and certainly not Wal-Mart.

For example, there was a nifty city bike called the Trek Lime that auto-shifted itself through an interesting mix of internal gears and electronics. A speed sensor built within the front hub communicated to the rear hub the appropriate times to up- or downshift via wiring internal to the frame, and when I rode the bike, shifting was flawless and near-seamless. The bike was also surprisingly affordable (considering the technology) at $550. Give Trek a thumbs up for bringing such a unique, unproven idea to a niche market—something large bicycle manufacturers have traditionally been reluctant to do.

My favorite gadget was a bicycle blender. This is because it allowed us to make delicious human-powered smoothies!

The procedure was pretty simple. First, throw in a banana, some frozen fruit, vanilla and honey into a blender that was attached to the rear rack of a bicycle. The blender had a spur gear that pressed against the rear tire sidewall, rotating as the bicycle rider pedaled. After a minute of leisurely pedalling, voila—a cold nutricious drink ready to power your next adventure. Okay, so maybe it isn’t too practical nor nearly as easy as pedaling over to, say, Gelazzi in Fort Collins for a frozen beverage, but I think it is rather ingenious.

Even for those who couldn’t care any less about the machines had fun. Take the numerous kids around, for example. Some were hopping up and down like kangaroos within an inflatable playground akin to those you might see in a McDonald’s Kidsland. At noon an obstacle course was set up. Only a few infants on little BMX bikes plowed right into orange cones instead of successfully navigating around them.

Those who HATE bicycles might have even had fun in the Bike Toss! Unfortunately, I did not stick around long enough to watch that.

Perhaps the best part of the event for me, however, was running into friends Jeanne and Laura at the fair and getting to meet their families. It turns out their husbands (both Ironman triathletes) are true cycling nuts as well. I guess in this town, we are in fine company.