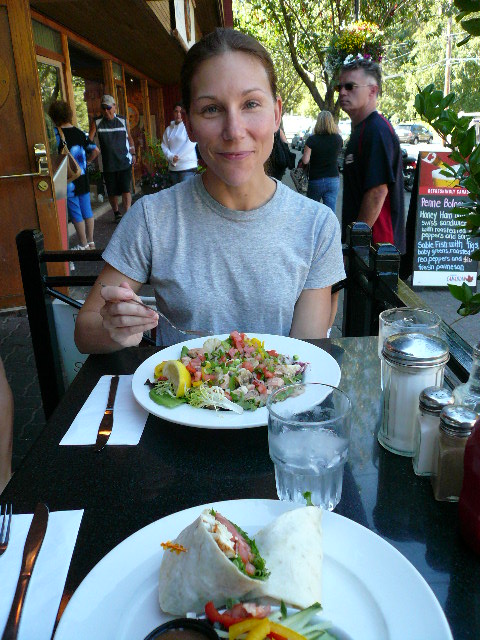 “Are you bonking?” I jokingly asked Lisa, finally breaking the silence.

“I am bonking,” she glumly replied, forehead flat on the table. Never mind that this was not during an arduous athletic event such as the Ironman, but rather, while waiting for food.

The offending restaurant was Apostoles Restorante in Golden, British Columbia. The wait for our meals were so long that at one point (after at least half an hour) I even got up from the table to ask a waitress if she could kindly bring out some garlic bread BEFORE our entrées, as is customary in seemingly every other part of the world. It also did not help that the waitresses in this restaurant were as stoned-face as robots and were completely oblivious to me waving at them with exaggerated arm movements to catch their attention.

Unfortunately—long waiting periods for service seemed to come standard in every Canadian restaurant we went to. Why is this?

Perhaps due to low population densities (Canada has less people than California despite having a land mass much larger than the U.S.’), there just aren’t enough people to staff restaurants. Maybe Canadian culture embraces a more relaxed pace of life compared to the Yankees down south. Possibly, considering how obese many Canadians are, they are just slow with all that extra weight to carry around (ok, probably not the correct explanation, since Americans are even fatter!)

Whatever the reason, it was refreshing to come back to the U.S., enter a restaurant, and order and finish eating dinner in less time than it would have taken to receive food in a Canadian diner in the first place.

The United States gets a bad rap for inventing “fast food,” but at least in American restaurants, a person doesn’t bonk while waiting for a meal.