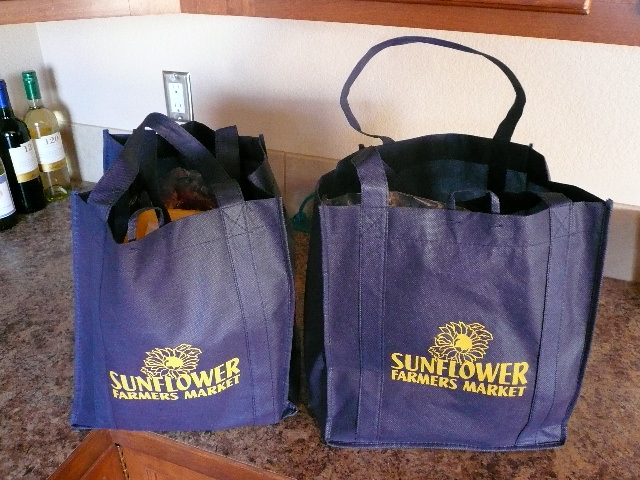 Ten years ago, I had a roommate named Kathy. Kathy had previously majored in environmental studies at Stanford, and therefore was very conscientious about her impact on the environment. One of her habits that initially raised my eyebrows was walking to Andronico’s—sort of a higher-end, smaller version of Whole Foods—a couple blocks away from home with one or two canvas shopping bags.

“Wow,” I used to think, “that is going a little overboard. Who brings their own bags to go shopping? And how bad are grocery bags? They can be reused, after all, as garbage bags or to, say, bring shoes to the gym.”

Ten years later—in my new push to become more environmentally friendly—I only now realize that Kathy was well ahead of the times, having become a fan of canvas grocery bags myself after using them for over a month.

Prior to a month ago, I was good about requesting paper bags (which, unlike plastic, at least decompose quickly), or—better—saying “I don’t need a bag” when purchasing only 1-3 items. I was also always good about bringing in the plastic bags that inevitably would accumulate in the house to, say, Albertsons for plastic bag recycling. Yet, there always was something disturbing about coming home from grocery shopping with 3-5 bags I didn’t need to do anything but transport food (which is often contained in enough wasteful packaging as it is) from the store to the car, and from the car to the kitchen.

Finally, I purchased a couple of canvas bags from the Sunflower Market as an experiment. After all, they were just $2 each (since then, I learned that one can get them at Safeway for $1 each!) And after using them for a month, I can attest they have benefits beyond the ecological benefits of reducing the amount of paper and plastic we use.

The one downside to using reusable grocery bags is that now I have less paper bags to line the kitchen trash can. (Well, maybe this is not a downside, since I had too many to begin with!) BUT, this just adds additional pressure to reduce waste that goes into the landfill. Actually, I produce so little waste that I’ve just downgraded my trash collection plan. So this is actually a good thing.

Now I am feeling pretty silly for not doing this for a whole decade after being introduced to the idea by Kathy. Well, better late than never, I guess!