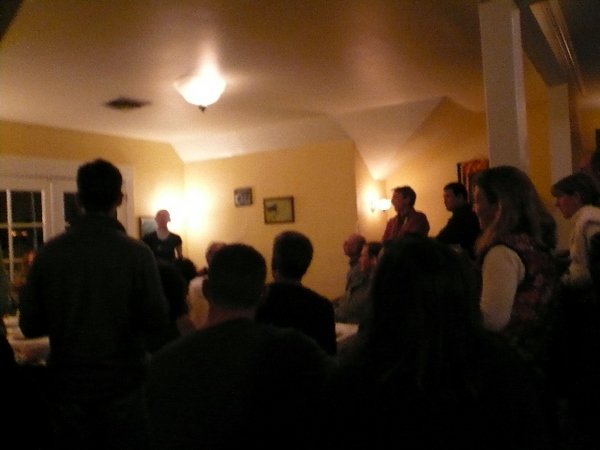 “This being Boulder,” said one of the organizers of Mountain Running Seminar in his introduction, “half of this room probably could give a slideshow on running. But we are very fortunate to have six of the best mountain runners in the world here tonight to talk to us.”

Pete and I went down to Boulder well in advance of the seminar to get some empty seats, which turned out to be a good thing because ultimately many attendees had to stand. The second floor of Sherpa’s Restaurant just was not large enough to accommodate the many dozen running enthusiasts from all over the Front Range, but at least the all-you-can-eat Tibetan/Nepalese fare was interesting and satisfying.

So were the talks by the guests of honor, which included:

There was one more person, but his name escapes me. Sorry.

A common theme among all these runners was that despite being very passionate about running, none of them trained very scientifically. They all spent very much time training (20-30 hours of running per week!) but none were slaves to their heart rate monitors or to highly regimented workout schedules.

For all of them, running in the mountains constituted their favorite workouts.

“I might be able to cut one or two minutes off my marathon time if I trained specifically for the marathon,” said Anna Pichrtova. “But the mountains are where my heart is.”

Interestingly, almost all the speakers said that mountain running in Europe is far more competitive and lucrative than in the States, saying that (as with cycling) people in the U.S. just aren’t as interested in the sport. Of course, there are exceptions, such as with Boulder.