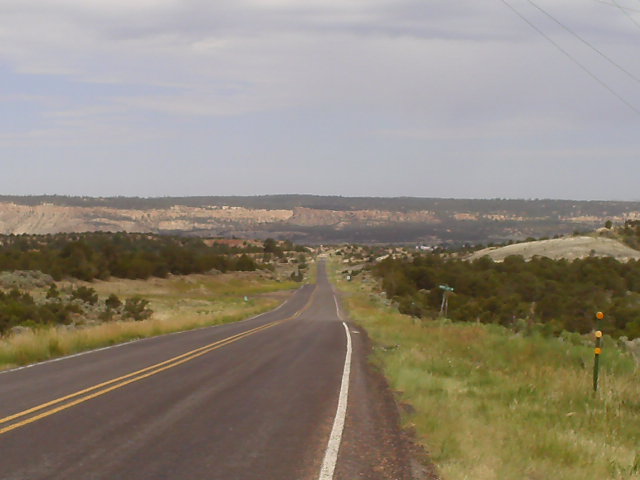 Yesterday was an awesome day; never mind that I had a number of things going against me. For example at one point in the afternoon my thermometer read 105 degrees. While I’m not sure how accurate that is, it was definitely hot. But that didn’t bother me at all as I’d much rather be riding in dry heat than 30 degree temps (can not hear rest of sentence).

Mechanical problems: I had a flat tire. This time was the front. It was apuncture. Delayed me about 25 minutes, because I had to fix my air pump that was malfunctioning. My rear shifter also is extremely hard to press so instead of using my thumb I had use my whole palm.

Lastly, there was a humongous climb. The climb took about five-and-a-half hours to go up. I was feeling phenomenal. Despite all the lava rocks, I really enjoyed the climb. Managed to ride just over 100 miles yesterday.

Today I was rewarded by a screaming descent into Cuba. I’m really looking forward to all the pavement in front of me for the next 121 miles.

One message for Kevin Hall. I just wanted to say hello to him again. I encountered Simon from the GDR [Great Divide Race] in El Rito yesterday. He mentioned that he met you in Whitefish and even gave you a bike box so that made me think of you and I hope you and your family are well. Take care and I’ll talk to you later.
(recorder time: 2008-07-06 11:38:49 EST)

Hi, this Felix Wong calling at 10:40 from Grants, NM. Before I talk about today I wanted to add something to my last message that I forgot to mention. Another problem I have had mechanically was one of the eyelets holding my bike rack separated from the frame. There are two screws attaching the rear rack to the seat stay. One worked its way loose so I’m using a zip tie on one side. The rack was attached with one screw on the other side. Apparently all of the jarring from the really rough trail on the really long climb yesterday was too much stress for the one eyelets. Now the rear rack is attached to the seat stay with two zip ties and zero screws.

Another interesting thing that happened yesterday when I was going up that really long climb was a guy a pickup truck stopped me and warned me about cougars that he claimed were mauling people in the day. That just motivated me to not stop and is why I did so well on the climb.

Today was a big day for me. I managed to ride 170 miles today. I had a puncture on the rear tire. Other than that everything has been going well. Pavement really has helped me put on the miles today.

I also saw Simon from the GDR again. I saw him maybe about 3-4 times today. I managed to just barely keep ahead of him for the second day in a row. We’ll see how long I can keep that up. He is clearly a stronger rider than I am. It is great to see him out there and know that I’m not completely alone.