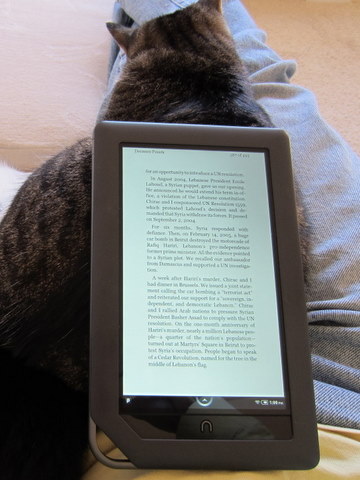 The last couple months I’ve been thoroughly enjoying my Nook Color e-reader tablet computer, and can easily list off reasons why I prefer it over physical books: 1) I don’t need to use two hands to keep a book open; 2) obtaining new books from the library or bookstore is only a download away, saving time and dollars over driving; 3) the Nook keeps my place in the book, even after I’ve fallen asleep mid-page; 4) I can read in the dark without keeping a significant other awake; 5) I can check e-mail or news while reading a book without having to go over to another device; 6) it can search for text; and 7) it gives me ready access to many books without having to haul a huge backpack around. To me, a Nook is to a book like a computer is to a living room full of filing cabinets, typewriters, and abacuses.

But this post isn’t about all that. No, during this holiday season where many folks are considering purchasing tablet computers and e-readers, I wanted to point out a few things that the plethora of “Should I buy a Nook or Kindle” articles gloss over or miss entirely.

Note that most of those articles talk about the new Nook Tablet instead of the now one-year old Nook Color, but primary differences between those two devices are the Nook Color has a slower processor and less memory and is at least $50 less expensive. Otherwise, the advantages of the Nook Color over the Kindle Fire apply to the Nook Tablet too.

The reasons I prefer the Nook Color over the Kindle Fire are as follows:

Contrast to the Kindle Fire, which looks just like a generic Research-in-Motion Blackberry Playbook because its manufacturer is the same as RIM’s. Not only is the Fire design aesthetically less distinctive, but it has usability shortcomings that can’t be fixed with a firmware update: an on/off switch that is too easy to press due to its location, but no physical volume control buttons.

Other advantages of a Nook Color: a slightly better display (they are both supposedly excellent), is expandable with its mini-SD card port (the Kindle Fire has no such feature), and is easily rootable (Amazon is supposedly taking away root access for the Kindle Fire with their upcoming December firmware update). You can even boot a Nook Color to Android off a mini-SD card, hence retaining the original B&N operating system. Which is important in the case of the Nook Color, because rooting it not only voids the warranty, but takes away the Read in Store feature!

In light of all the above, why would anyone want to get a Kindle Fire? Well, he might already own books in Kindle format. And the Kindle Fire has Amazon’s media ecosystem—e.g., for music and movies—is tightly integrated into the device. The latter isn’t a big deal to me because sideloading MP3s onto my Nook Color is cake, plus it has Pandora. The Nook Color could always play You Tube videos very well, and as of Barnes & Noble’s December 12, 2011 1.4 firmware update, it can stream Netflix movies. Not to mention, I’d much rather watch movies using my TV and home surround-sound system than a 7″ tablet.

The Kindle Fire, with its Silk browsing technology, is theoretically faster at surfing the Internet. But it comes with serious security concerns and users haven’t been all that impressed with its speed versus other tablets. The Nook Color, on the other hand, seems to surf the web about as fast as my other computers, so to me it’s at least “good enough.”

The Kindle Fire also has more apps. But the Nook Color already has at least a thousand, of which I’m only using a dozen or so. So far I haven’t heard of a particular app that would sway me to want a Kindle Fire over a Nook Color.

What the Nook Color is not good at

As with any other tablet or device relying on a touch screen, the Nook Color is not very good for tasks that require a lot of input. E.g., typing more than a couple words or accurately selecting with a fat finger links in web sites not optimized for mobile devices. For those things—and anything requiring content creation—I much prefer any of my other computers, including my netbook, that have a keyboard and use a mouse pointer. Tablets only excel at some forms of media consumption, particularly e-reading.

Upon unveiling the first iPad, Steve Jobs suggested that the iPad was far superior than underpowered netbooks. If I could only own one or the other, however, I’d pick my Linux-powered Dell netbook any day. But prices of tablets—such as the Nook Color—have come down so much that most people can afford to have one in addition to a netbook, laptop, and desktop computer. Think of a tablet as an auxiliary reading device instead of a computer replacement and you’ll be happy with it.