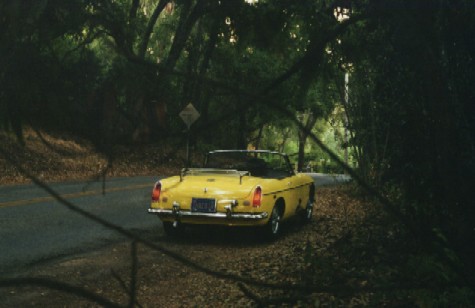 For the last couple of months, Goldie was making a strange rumbling/knocking sound for a few seconds after being turned on. It always went away, but recently (April 1996) the noise would become really loud during idle. Unsure of what it could be I consulted the Haynes manual, and became apprehensive that the big end bearings were going bad. This was because the symptoms of worn big end bearings was, “Violent rumbling noises that may lessen upon acceleration,” exactly what was happening.

So I brought Goldie in to Burnett’s British Auto Service, just 1.5 mi from Stanford. Mr. Burnett turned on the car, and instantly said “It’s the exhaust.” I wondered if he knew what he was talking about as he didn’t even look at the exhaust and the pipes seemed bolted in very well. Anyway he recommended going to Menlo Mufflers in Mountain View, and whatever I do, “Don’t go to Midas.”

A Case of Laryngitis

So on April 18 I visited Menlo Muffler. The shop was clean and full of enthusiastic employees, although it was remarkably devoid of customers. Which was good, as they were willing to inspect the problem right away.

After putting Goldie on a lift they inspected the front muffler. “Muffler rotted out,” I was informed. They allowed me to go under the car to show me what was happening. “It’s like an empty Pepsi can,” the manager told me while flexing the muffler shell. “It’s the popping in and out that’s causing the noise.” Aha, a reasonable explanation for the problem.

They suggested a glass pack, but I insisted on the original Walker. They look up the part number in a book, and remarkably, they have the muffler. “We’ll be done in 20 minutes,” the employees said. With obvious skill and experience, they quickly mounted the muffler. I was most impressed.

I paid the shop ($150–about $115 for the muffler and $35 for labor) and was on my way. Yep, no more hideous noises. But wait—it’s so quiet. Even under acceleration only engine noise was apparent, the exhaust note being non-existent.

A quick drive through the mountains confirmed what I had feared: Goldie had transformed into a Volvo-wannabe. The glorious British exhaust note was gone, and so was a lot of the fun.

Back with a Vengeance

I was surprised; on my first MGB I had replaced the exhaust system myself with OEM parts from Vicky Brit, and the exhaust note still was there. Perhaps this “stock” muffler wasn’t stock or was stock for a later model MGB. Regardless, it didn’t take long to decide that the new front muffler would have to go.

I swallowed my pride and went back to Menlo Muffler on April 19. I explained the situation and the manager (different from yesterday) was most understanding. We discussed the possibilities; at first I suggested replacing it with a straight pipe but he explained that exhaust would “back up” and mix in the pipe during coasting and/or idling, causing a popping noise. Which explained why two mufflers were needed in the first place. He suggested a glass pack, and this time I agreed. He didn’t even charge me for installing it as “he just wanted a customer to be happy.” What a great operation.

And now the test; yup, much better, the roar is back. I noted that it sounded a tad different from before; the note was a little deeper, smoother, but just as loud. Sounded a bit meaner. It would grow on me in little time.

Ground clearance seems to have improved a little, although once in awhile it would scrape the top of a speedbump. Ah well. Goldie was back and I can now attest that it at least 20% of the driving experience is due to the “music” of the exhaust.