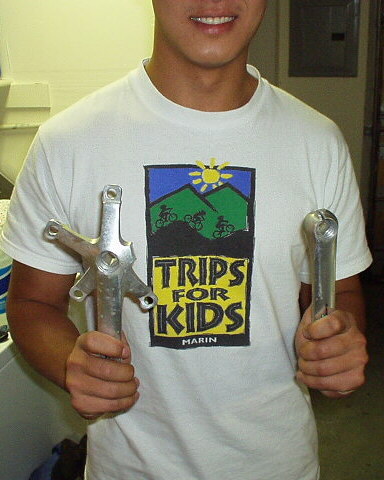 My first idea was to use a pulley extractor. I got a 3-armed one from Sears. This was totally ineffective. It just could not grip the crankarms well enough.

Finally, out of desperation (by this point, Dave did not care whether the cranks were reusable or not), we busted out my Dremel and its rotary cutting tool. The rotary cutting tool cut it like butter! We made a slit in the crankarm all the way to the bottom bracket spindle, and then inserted a screwdriver in the slit to “wedge” it open (like a crowbar). Some gentle taps on the crankarms were able to get them off.

See the picture above. If you are wondering why the main crankarm (the one with chainrings) was also cut on one of it’s “spider arms”, it was so we could get a better grip with the pulley extractor (which still was totally ineffective.)

A few months later it became time for me to remove my Shimano RX100 crankarms so I could install my new Campagnolo Racing T cranks. Same thing happened: my crankarm remover stripped its threads. I had to resort to the same Dremel cutting method.

Incidentally, with the Campy cranks, I’ve never ever had the same stripping problem upon removal. I’d recommend anyone who has to install cranks to use antiseize compound on the BB spindle. This is controversial, but in my experience not only does it help keep the cranks quiet, it prevents the crank from becoming stuck on the BB spindle (just tighten the crankarm bolts really tight and use either teflon tape or Locktite to prevent the cranks from loosening).

I just had exactly the same experience with a Shimano 600 crank. The dremmel sliced throught the crank in no time and i could pry the crank off.

Last night i picked up an old cinelli track bike and guess what, the right crank arm is stripped as well. Looks like i need some new cutting wheels for my dremmel. ↩ Reply

Next time try to remove the bottom bracket with the crank arm still attached (this works for older, non cartridge type bottom brackets) and smack out the spindle by putting the arm in a vise. Use a bolt of the same size as the spindle and a 20 oz framing hammer. It will come off with a few good wacks! Some people say that if you ride without the cap bolt the arm will eventually work itself loose, but that hasn't worked for me. ↩ Reply

Apply a propane torch directly to the stuck crank for 30 seconds. The metal should expand just enough to allow the crank to slip off easily. If the threads are stripped, lay the bike on its side on a chunk of wood with enough clearance that the crank doesn't touch the ground. With a small chunk of wood and a hammer, pound on the crank arms as close to the BB as possible, working around in a circle, and the crank should fall right off. This method works like a charm on extremely stuck cranks. ↩ Reply

Removed stuck cranks yesterday. Solution = lots of liquid wrench + heat gun + 2 hours wait + Park crank tool. No damage. In the past, I've used a dremel tool to cut the crank off. I've also drilled out the axle with a cobalt drill bit. That keeps the crank intact. ↩ Reply

Loosen the crankarm bolt to just finger tight. Ride out of saddle for a few miles until crank arm just starts to loosen. I did this several times while wrenching as a shop mechanic. ↩ Reply