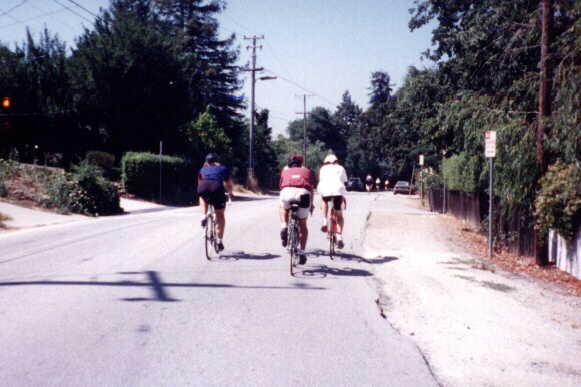 Most of us arrived at the Port of Redwood City at the designated time of 7:00. At the the registration tables, we did introductions and handed out Stanford C-YA shirts. Surprisingly, there were only a few sleepyheads, one (Adrian) of whom we would not meet until the middle of the ride.

We left a few minutes after Debby arrived with mysterious chain marks on her legs. We teased her about that throughout the ride, but she took it in good humor and a smile. “I had to take my rear wheel off to get it in my car,” she explained, “and the chain got all over me.”

The elevation chart showed that there was not much sustained climbing except for some hills in the second leg of the ride. The ride, in total, would cover 70 miles and 3500 feet of climbing.

The course started in the streets of Redwood City to la Alameda de las Pulgas. For a 70-mile ride, the map looked pretty complicated so Deedee clipped the map to one of her brake cables right in front of her handlebars. I thought that was a great idea. Fortunately, there were also arrows posted on the road to indicate where to turn.

It was about a year since I last ridden these roads so I felt some nostalgia about them. Mainly, though, I simply enjoyed the company of the teammates. Adam Tow mentioned an article he read of the 1989 Tour de France, the race that capped Greg Lemond’s epic comeback. Adam is a great storyteller and our rallying cry throughout the ride would be the words that Laurent Fignon heeded in the stage that almost cost Lemond the tour: “You’ve got to go now!”

The rest of the first leg took us to Junipero Serra, past the Dish at Stanford, and to a park along Foothill Road. The park was where the first rest stop was.

The day heated up quickly so many cyclists took the opportunity at the rest stop to strip off layers of clothing. The hilliest part of the ride was to come next, just past Steven’s Creek Park, where I did a lot of my training when I lived in Sunnyvale during my senior year as an undergraduate at Stanford. The roads there were shaded and pretty. This was my favorite part of the tour.

I rode alongside Debby in that setion. I love my Cannondale, but she has a beautiful Italian steed that I couldn’t help but admire. With its Pinarello frame, Campagnolo components, and Continental tires, her bike bike exuded elegance, class, and heritage. If I wasn’t less obsessed with lightness and stiffness, I would have loved to have had a bike like hers.

Unfortunately, her Selle Italia Turbo saddle became loose on the seatpost. That’s especially unhelpful when trying to power up the hills. A quick turn of a hex key that I had fixed this, which lead to an interesting discussion of the service at the Palo Alto Wheelsmith. We concluded that the service is pretty good there.

At Mile 25, the terrain started going downhill, giving us some time to catch our breath. But then up ahead, David and Jennie made an errant turn, towards Cupertino. So that they wouldn’t get lost, I pursued them in time trial mode. David later joked that the turn would have enabled him to finish four hours earlier.

When we reconvened with the others, there was someone on the road with a flat tire. It was Adrian, the former president of the Stanford C-YA. So he made it after all. It was kind of funny because he was was riding with Mark for about five minutes, but they didn’t realize they were Stanford C-YA teammates until they had to stop.

Soon afterwards we arrived at the next rest stop in Saratoga. I took off my shoes and walked in my socks, having broken cleats too many times while walking in my cycling shoes. By this time the day was getting very warm.

This section went through Saratoga and Cupertino and back to the same rest stop on Foothill Road. Some of the homes in these neighborhoods were really nice.

After Mile 46, Stanford C-Ya split into two groups. Back at the rest stop, I attempted to get Mark’s wheel somewhat back to true with a multi-tool because it was really wobbly. Meanwhile, Debby, Deedee, and Roger took off because we are taking way too long.

“I’m sure you’ll catch up to us, anyhow,” Debby said. We never did, but later heard that Debby, Deedee, and Roger finished the ride with no problems.

This part of the ride took us past Foothill College and over roads I had never ridden before. There was some climbing on the roads that went to Portola Valley, past the Alpine Inn, and over to lunch.

I rode with Aaron, one of the entrepreneurs on our team along with Adam Tow and Adam Feder. Aaron was the only one riding a mountain bike—a nice front-suspended Specialized M2—which I imagine must added to the challenge of cresting those hills. He did admirably.

We arrived at the lunch stop, which had much of the same food at the other rest stops such as bread and fruit. The pasta was excellent, but not enough was prepared so they were rationing it.

This section had the last of any significant climbing. First there was an ascent preceding a straight 40 mph descent. Next up was Whiskey Hill, leading to Woodside and Cañada road, where Adam F. got a flat. The last climb was on Jefferson Avenue.

Both Adam Tow and I had gone up Jefferson a few times, but only from the east. We wondered how long it would go uphill; maybe one mile? But because it was the last significant climb of the ride, we decided to “Pantani” it.

“You got to go NOW,” we yelled at each other, alluding to the LeMond-Fignon battle. We reached velocities above 20 mph on the uphill. We totally overestimated its length, though, because in seemingly no time we were the top. At least we were rewarded by a nice downhill.

In Redwood City, Mark made a different turn than the rest of us, so I chased him down. It turned out that he was going the right way and the rest of us were not. By the time I caught up to the two random guys he was riding with, he had already realized everyone else was elsewhere and went to rejoin the group.

Meanwhile, I lost track of the main group and mistakenly thought I was way behind. So I went into time trial mode again and got to the Port of Redwood City before the main group. It turned out the way I went was a shortcut.

Anyway, it was a fun ride. We are planning a sequel for September 1998. It shall be more ambitious, hillier and longer.