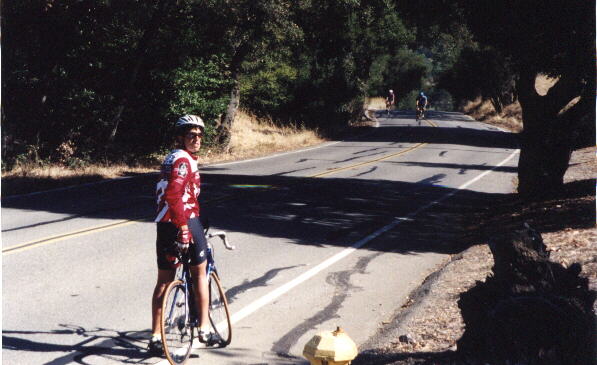 For the third year in a row, Stanford C-Ya did the Annual Tour du Jour hosted by the National Multiple Sclerosis Society. However, this year only three people showed up: Laura Guy, Dan Lieb and myself. Nevertheless, we had a lot of fun.

We ended up doing only the 65 mile route under perfect weather. Probably the most significant part of the ride for me was seeing fellow Stanford alum Gina Alioto and her boyfriend Tyler at the Portola Valley rest stop. I had met them almost a year earlier at a party of my friend Loren’s, and I had told them about this ride then and it was great to see that they made it out there. They were doing the whole 100. I talked with Gina for about 15 minutes, during which Dan and Laura took off with Dan saying, “I know you’ll catch up.” They got about a 7-minute headstart on me, meaning that I had to “time-trial” through Portola to catch them. I caught up to them by the last hill before the Portola/Whiskey Hill intersection, after which we all rode together again.

The only other remarkable thing was Dan getting a big gash (and flat) in one of his Vredestein tires. Luckily I had some boot material I cut about six or seven years ago from the Michelin original tire my Cannondale came with in my saddle bag, which got Dan back to the finish without another incident.