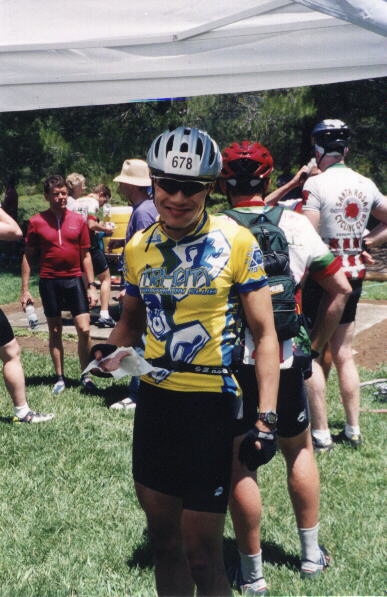 A couple of you asked me about how the Terrible Two went over the weekend. This is “the most difficult double century in the U.S.” and also the same race I did last year on my birthday with bronchitis. Last year I managed to complete the race, albeit in the very last group that was allowed to finish (the rest got kicked off the course because they couldn’t make the time cut-off), and my time was 17:50—an hour and twenty minutes more than the 16:30 “official cut-off”, where the reward was a “I Did It!” T-shirt and better bragging rights. I got credit for the ride, but yearned for the day to redeem myself by finishing under 16:30, when I was healthy.

So I got my chance this year. Unfortunately, I had 800 more miles in my legs up to this time last year than this year, and for most of this year I’ve been in worst shape than last year. However, three weeks the race I started training more vigorously, including a half-century, metric century, and a full-century, and I peaked to a point where I felt like I was actually in really good shape. And even if I was slightly out-of-form, an out-of-shape me was better than a sick one, right?

I got to see whether this was true or not on Saturday. The weather, following our sweltering heat wave over here, was remarkably cool—probably the coolest Terrible Two on record. My strategy was to stay well within myself for the first 75 miles, and then go at it by Mile 75—the start of the Geisers, the second major climb of the day and a truly terrible one at that.

So, I started out easy—actually, at the back of the pack, thinking “I’d rather be passing people than being passed” for psychological reasons. Also, most other cyclists started out way too enthusiastically, and by the time we hit Trinity Grade (the first major climb), I easily caught and dropped a lot of them. BTW, at the backside of this grade was the first of several similar accidents that occurred during this day, where a cyclist would be descending way too fast for the steep, narrow, technical roads. A not-so-pleasant reminder of how dangerous this course can be.

And by Mile 75, I was still feeling okay, although I was riding in a paceline with a friend from my triathlon club who was going a bit too hard—but then came the Geisers. What a horrible triple-summit climb, with grades exceeding 18% at some points. By the time I got to the top, like 1.5 hours later, I was wiping my eyes every 30 seconds due to sweating profusely, was weaving/wobbling all over the road, and was generally in complete agony. Lactic acid had completely consumed my legs.

Unfortunately, this was just when the ride was starting to get interesting. The second half of the race is notoriously much more difficult than the first half. Additional brutal double-summit climbs were to come: Skaggs Springs, Steward’s Point, Fort Ross and my legs weren’t faring any better. Still, as I told Everitt (the friend from the tri club) at lunch, “if I don’t stop, I think I still can make the 16.5-hour cutoff”.

So still in agony I carried on the rest of the way. Probably the most comical moment of the ride was on another 18% grade, this time at Steward’s Point, where I was riding with 3 other cyclists closeby: one in front (on a recumbent), and two cyclists on “regular” bikes 50 feet back. Well, I was standing on the pedals, pushing them as hard as I could, only to see my speed drop from 6mph, to 5, to 4, to 3. I could have kept on riding, but this time I was like, “If my speed drops to 2mph (a 30-minute-mile pace), I will walk, because surely I can walk faster than two miles per hour.” And soon enough, yes, I saw my cyclometer register 2mph, so I dismounted my bike, took off my shoes, and started hiking up the hill. Within 2 minutes I had already caught up to the recumbent rider, and to his amazement (dismay?) I was walking right past him on his left. I felt bad for the guy especially since I’m a recumbent rider myself (although I had the sense to ride Canny instead this time), and could totally empathize with him. Anyhow, the upright cyclists behind me were keeping up with me and finally caught up to me, but only at the top of the hill. One of the cyclists would exclaim, “This is rather pathetic that I can’t even catch up to a walker until 50 feet from the top” and the other one would say, “Yeah, it’s so funny, the recumbent rider back there was like, ‘That person walked right past me, I couldn’t believe it.'”

This was actually a turning point of the ride for me. After walking up for 15-20 minutes, back pain that had been aggravated by all of the grinding and climbing and subsided. My legs felt a lot more fresh. In general, I was also a whole lot happier. I knew that I’d be descending for about 10 miles and then riding along the coast of Highway 1 for 15 miles with a tailwind. I made up some time here.

But then there was the Fort Ross climb, which was steeper than I remembered. Agony again. It would be the last climb of the day, and I was still on pace to make it by the official cutoff. Still, in my mind, all it would take was one flat tire or one wrong turn and I’d be out of the running. So I continued to go as hard as I could—not fast, mind you, but painful.

Darkness descended and but at least there were no more major climbs, just many little ones. But finally, down in the outskirts of Santa Rosa, I saw the local elementary school I had started at and heard the applause of those who were there.