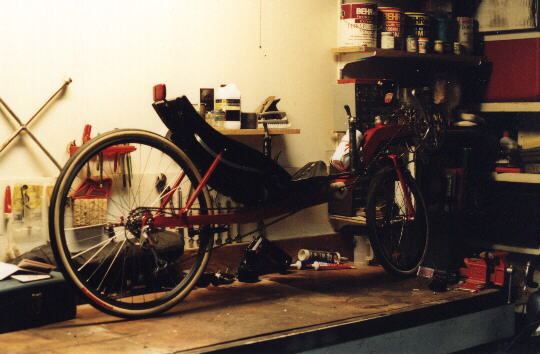 In October of 1999, I ordered a handcrafted recumbent from Reynolds Weld Lab of George Reynolds’ design which ultimately became Reynolds Wishbone #35. While George welded up the frame, I procured and built up the rest of the components.

George then shipped me the recumbent frame without paint as I requested, and I did the final prep work including “smoothing” out his welds using Bondo. Then I had a local automotive body shop paint it Porsche Guards Red. Finally, I modified other items like the seat assembly and assembled everything together.

I did ditch the green AstroTurf that George had included as seat padding and replaced it with black foam. The AstroTurf was an innovative idea with the rationale of it being airy while providing shock absorption, but it simply did not look right on such a sleek bicycle.

I just finished building my first recumbent. I was wondering about getting a photo to you to get some feedback?

Since this is my first one, I have new ideas for a new one.