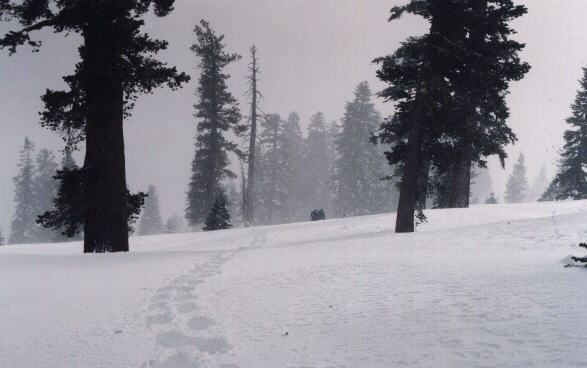 Drip, drip, drip. The wet weather of the week not only dampened everything outdoors in the Bay Area, but also my hopes of doing some outdoor climbing over the weekend. Meanwhile, as I pondered whether to skip yet another evening run/bike workout due to rain, in comes email from my friends Brent and Nelson. “So who wants to go snowshoeing?” comes the question.

How perfect. Rain is not great for any of the road- or rock-based sports, but great for producing nice-and-fluffy snow in the Sierras. Not to mention good for building up some snowshoeing experience before having to do some during my upcoming February Shasta climb. We’re on.

This was the first time snowshoeing for both Brent and me. In preparation for the medium-altitude hike, we brought the following:

For this trip, I got to try out a new pair of Gore-Tex Oversocks made by a company called Rocky I picked up on sale at Performance Bicycle Shop. “No other sock keeps your feet warmer, drier, longer”, promised the packaging. After the trip I am happy to be able to attest that they work as advertised.

The Drive to Echo Pass

We all met at an Albertson’s in North Fremont on Saturday morning at 7:30 a.m. I got there a few minutes early, but Brent was even earlier which was amazing considering he had too wake up at 5:00 a.m. to drive down from San Francisco. The trip up to Echo Pass took about 3.5 hours, including a couple of fuel/restroom stops.

Our final restroom stop just so happened to be at the Strawberry Inn, right at the junction where Tori and I had turned off at three weeks before to go hiking at Lovers Leap. As we continued up the highway, however, it was soon evident that Lovers was now fully covered with snow.

Just 4 miles up from Strawberry we made a left onto a snow-covered road which would test the 4-wheel-drive ability of Brent’s Chevy Blazer. This is real 4X4 country; there would be no poseurs here. We pull into an area next to a sign that says “Parking” and are ready to start unloading our gear when a big bus comes haulin’ up the road. The bus driver dude comes out and tells us he wants our spot. Turns out that this area was part of a Baptist Church camp, and they were bussing in campers.

So we parked in another spot that says “Parking”… no problem. Well, almost. Just as Brent was about to pull into the spot, we noticed that the Blazer was not moving forward. One of the rear wheels was stuck in a pretty deep snowbank. Brent tried to rock his truck fore-and-aft, all to no avail. So Nelson and I got out and pushed it out of there… even 4-wheel-drive does not always guarantee traction, apparently. Otherwise the Blazer did great.

Our initial goal was to get to the top of Echo Pass at 9400 feet. Since we started at 7000 feet, this meant 2400 feet of climbing. At first I was thinking, “Cool… that’s like going up Mission Peak in Fremont, no problem.”

Of course, this would be in snow shoes, though. Snowshoeing is really just like regular hiking, except that with every step your feet sink down a little bit more. Or in this case, A LOT more. Each step was compressing an average of at least a foot of snow as the snow was so fluffy from the recent rains.

But the three of us remained undaunted, of course. I had just done a very intense hike in Muir Woods a month ago with Brent (not intense due to the terrain or even the altitude gain; intense due to how fast we were blazing), and knew what he was capable of. Nelson had done a lot of cycling in the past and quite a bit of snowshoeing, plus has a great attitude.

The hike turned out to be surprisingly strenuous, however. The long distance one’s foot stepped down mean that he had to pick up his foot that much higher to move forward. Furthermore, picking up one’s leg often meant that a lot of snow had to be displaced that was now covering each snowshoe. In other words, one would not only have to pick up his leg higher, but with more force due to the weight of the snow that had to be displaced. This was a tremendous workout for both the quads and hams, with much less emphasis on the calves than normal hiking on dirt trails. I kept thinking this was such great cross-training for bicycling…

And around 7700 feet, the mountain was getting much steeper. Here we split up (keeping in contact with Nelson’s Motorola Talkabouts), with myself taking the more direct route, and Brent and Nelson going around and taking presumably a more gradual route. Once again I couldn’t help but compare this to bicycling up a hill; it felt so similar, pushing down with one leg while pulling up with the other, alternating every second or so. What a great workout.

Alas, it was starting to get late in the afternoon, plus visibility was soon reducing. What a change in weather from down below where it was calm and clear, whereas at the top was extremely windy with near-blizzard like conditions. Remarkably, I was still staying dry and warm, thanks to my rain pants, thermal underwear, fleece pullover and headband, gaiters, and GoreTex socks. Back in Boulder a couple of weeks ago I had made the resolution that never again would I be cold (since I should be able to afford winter gear)–no need to tough things out when with adequate preparation, one shouldn’t need to. The conditions here were nearly the same as they were at 7000+ feet in the Colorado mountains, and it was extremely encouraging that here I stayed warm due whereas I nearly froze my butt off over there due to inadequate clothing.

But the lateness of the day was still a concern… I had a headlamp, but we certainly didn’t want to get stuck after dark with the potential of getting lost out there. So at 3:00 p.m. and 8800 feet up, we made the decision to have a quick lunch and head back down. No complaints… we had done some good work for the day already.

“Woohoo!” I exclaim. “Piece of cake, going back down.”

Or so I initially thought. Due to the steepness of the hill and softness of the snow, we ended up dragging our feet through the snow in several areas, which was requiring effort. Staying upright wasn’t always, either… we had more than just a couple of falls, some of them rather comical. We tried buttsliding, then bodysurfing down… even tried freestyle swimming, which worked but was even more of an upper-body workout than swimming in water.

Nevertheless, we made it all the way back down in less than a third of the time it took to go up. What a day.

As we packed our gear, a man came out and asks us if the Blazer was our truck. “Yes, we’re just on the way out,” we replied. He then informed us that in the future we need to come in and pay $5 to park even though we had a snowpass and there were no signs anywhere stating this fee. We agreed though that the fee is totally reasonable and merrily go on our way.

Minutes later, though, we had a near-death encounter with a bus. As we headed down the snow-covered road, which is extremely narrow, a bus came roaring up the road and not even bothering to slow down. Fortunately Brent did not totally panic and managed to creep over to within 2 inches of a snow enbankment to give the bus a few inches to pass. That was close.

Finally, we had a quick dinner at a German restaurant 10 miles southwest of Strawberry. The food was good and hearty and succeeded in putting me to sleep for about an hour on the way back to the Bay Area. Can’t wait to go snowshoeing again in the not-so-distant future.