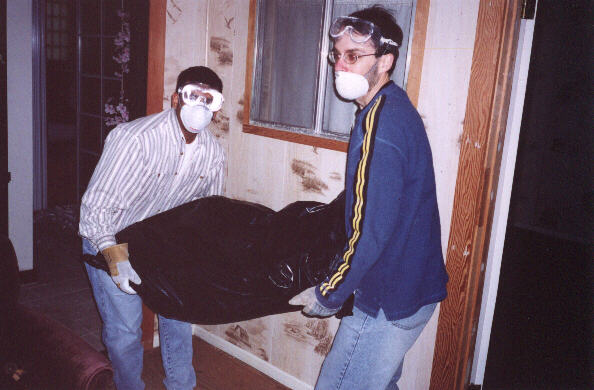 The sky was clearing, the birds were chirping, and spring was almost here. This made for a great time for a dinner/camping/volunteer event.

This one was organized by Community Impact and Stanford C-Ya member Kim Chiu, with Erica Guerra providing lots of assistance in organizing the dinner.

Here’s something of a recap of the event.

Dinner was at Cameron’s, a very happening British pub in Half Moon Bay. We all were supposed to meet at 7:45, and afterwards, caravan over to the camp in Pescadero. The drive to Cameron’s was an interesting experience, with most of us taking either CA-84 or CA-92 using Kim’s excellent directions. Some of us had planned to caravan taking some of the more scenic, winding backroads with me, but then one of these people forgot his toiletries at work and had to turn back to get them.

So I went up Kings Mountain and Tunitas Creek Rd. to US-1 solo, and got to the pub actually a few minutes early—except I didn’t see any C-Ya’ers. So I went to the back room and had some drinks with some friendly folks from a new hotel who were throwing a party, only to be found by Adrian 15 minutes later. Turns out everyone had already arrived, but was all the way on the other side of the pub which I didn’t even bother to look at. Thanks, Adrian for fetching me.

The food was surprisingly eatable, especially for British food. After lively conversation about foot-and-mouth and mad cow disease, we all headed to Pescadero. The drive deserves a few paragraphs all in itself. So here goes:

We knew that finding the camp would be tricky in the dark, but as I had been on those roads before and knew exactly where it was, it was agreed upon that I would lead. So up we went Highway 1, and I looked for major milestones–Stage Rd., Highway 84, etc. I was particularly looking for the light tower and gas station just beyond Gazos Creek, when I pass Pescadero Rd. and see a sign that says, “No gas for 33 miles.

Oh-oh, I think, did I already pass the gas station where Gazos Creek was? Impossible, because Gazos Creek Rd. is quite a few miles south of Pescadero Rd.? Anyhow, I notice that the headlamps of the cars behind me are now way back, so I pull over to the side of the road to let them catch up. Only, the cars pass me and none of them I recognize. At this point I think, “Oh no, I must have missed the turn while the others didn’t, and now I’m all alone.”

So I make a quick U-ie and am speeding towards Pescadero Rd. I know exactly how to get to Gazos Creek Road from Pescadero Rd. (since I went bicycling there before), so I make a right on Pescadero, and then another right onto Cloverdale, and a left onto Gazos Creek. Eventually, while fully expecting that everyone had already arrived at the cabins, I reach camp… only to be greeted by Tex and Scott. “You’re the first one here… where’s everyone else?” they say. I dunno…

So we wait for 15 minutes, and I am feeling terrible that I was such a poor caravan leader… But no worries, as then we hear Adrian’s Z3 rumbling through, leading the pack of all others. Apparently, everyone had found the gas station at Gazos Creek Rd. okay, and waited for everyone else to catch up. Anyhow, so eventually, we had all made it.

The next day, after eating each own’s breakfast and doing an little hike (for the early birds… not I), we broke into groups for various cabin restoration projects. Kim and her clan were painting, Erica the chem enthusiast did some acid washing, Lauren did some dusting, all while Adrian proclaimed “I am a builder, not a destroyer.” and did some sort of construction project with Evelyn and others. In contrast, Patrick, Sam and I were the Destroyers and soon found ourselves donning protective masks, goggles and gloves to rip out a ceiling and floor along with insulation which we prayed was not asbestos. (Turned out to be Dow Corning fiberglass, which is marginally better I guess.) There were many other people here who contributed much to these and other projects, so please forgive me for not knowing/remembering who was doing what.

The “destroying” was particularly fun, as it entailed lots of hanging off ceiling beams and ripping out the ceiling with our bare hands. Actually, this was very easy compared to the floor, in which we had to pull out many nails and use brute force, e.g. sledgehammer. We ended up taking out 99% of the ceiling and 66% of the floor”—not bad for 4 hours work.

The others also accomplished a lot, and we were provided with a scrumptious home-made lunch of pasta and squash soup. It was a fun, rewarding event, full of friendly faces and beautiful scenery. Thanks again to everyone for coming.