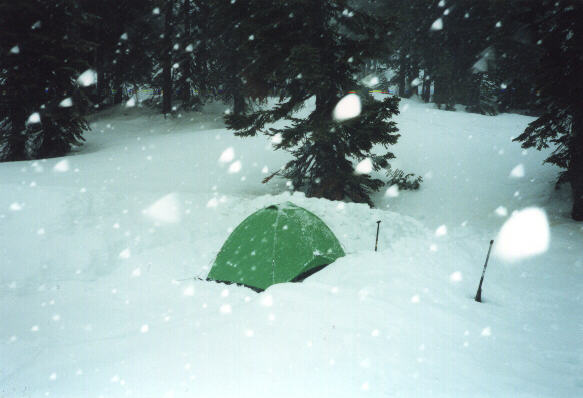 This year I desperately wanted to attempt a winter climb on Mt. Shasta. Originally scheduled for the end of February, the trip was finally started at the end of March. First weather and then a broken leg for my climbing partner delayed the climb.

Scheduled for the 24th of March, the day arrived with heavy overcast and prospects of rain and snow on the mountain predicted. As I was getting up my wife couldn’t help but asking, “You’re not really going, are you? It’s going to snow!”. My answer; an irrevocable “Yes, of course I am!”.

Felix, who’s trip this would be his first alpine climb, showed up right on time, 02:20. By 2:40 we were on the road. It remained overcast and even started to rain for the last hour of the drive. We stopped at the ranger station and filled out our permits and were off heading up the Everett Memorial Highway to Bunny Flat.

Visibility was mediocre, perhaps a half mile. The mountain was not to be seen, even from Bunny Flat. We started the short hike to the Sierra Club lodge at 7900 ft. Right from the start I headed in the wrong direction. Last year Dan and I passed the lodge to the East, I wasn’t going to let that happen again. So….This year I was heading too far to the west! Thanks to modern technology, and a desire to play a bit, the GPS and compass built into my watch brought us back on course and guided us right to the lodge.

Our selected route was to climb the Casaval. After arriving at the Lodge we meet another team who had spent the night there. Last night was windy and more of the same along with snow was predicted for this evening. Felix and I decided we would stay at Horse Camp for the night and wait to see what the next morning would bring. After about two hours of sitting and debating we decided to go for a short climb. We followed our route to about 9500 ft. where we came across a three person group in their tent. We looked around for a while and then headed back to the Lodge. On the way up and down we took some time to talk about various techniques of crampon use and ice ax use. The clouds were building by now and I had measured the wind gusting to 40 miles per hour earlier at 9000 ft.

We arrived back at the Lodge and started preparing for the next day. After a snack, melting snow was on the order and soon we were setting up the tent. By 15:00 it was snowing, at times rather heavily. By 17:00 we were in the tent and had retired for the day. Snow kept falling heavily all night. We knocked the snow off the tent from the inside several time and a couple of times got out (for other reasons as well) to clear the snow from the tent. At midnight I saw and heard lightning and thunder about a mile away. At 03:00 it was snowing like there was to be no end. At 04:00 when my alarm woke me I looked out the door and saw stars! It had cleared and the weather was, at the moment, perfect. Overnight we had received six or eight inches of snow. We immediately got up and started preparing ourselves. A quick breakfast, then some gear preparations and we were on the trail by about 05:30. The temperature was about 20 degrees F and the wind was still calm. By the time we left it was light enough to not need our head lamps. It was the first time we could see the mountain other than for a few seconds yesterday during a break in the clouds.

We climbed to about 9800 ft. to where Dan and I camped last year. There was a party of two, with whom we had spoken yesterday. They were just awakening. We kept moving up the moderate slopes finally gaining Casaval Proper. The wind was picking up but was not serious, perhaps 20 miles per hour. We continued on up to the “first window” at 10300 ft. The next part of the climb would be a short drop of about 40 ft. and then the first exposed traverse along the gendarmes up to the first notch, or second window along the ridge. Felix felt a bit unsure of his footing so we decided to stop here. The party who’s tent we passed on our way up caught up to us and as we rested we debated over the current avalanche conditions and what would be the best path to take from here on. I felt that either a direct traverse below the rock or a wide and quick arc at the bottom of the gully we were viewing would be best. The temperature was rising and the snow was getting soft. Avalanche conditions were definitely building. The other team decided for the traverse and we watched as they move on.

After a few minutes, as they disappeared behind some rocks Felix and I turned around and headed back to our camp. It was 09:00. On the way down I noticed snow-balls forming, a clear indication that the snow was warming and that on the higher angle slopes avalanches could become a possibility. By the time we were 700 ft. above Horse Camp we were starting to post hole, sometimes up to our knees. Back at camp we rested a bit and then started cleaning and packing up our camp.

As we departed from the lodge we both noticed how the clouds were once again beginning to build. The descent to the parking lot was uneventful. We had put on our snow shoes because the snow had become so soft. By 12:30 we were at the car. We changed clothes, ate and started the long drive back to the Bay Area. The trip was definitely worth the drive. We had a good time. For Felix, on his first trip up a [snow- and ice-covered] mountain, there were quite a few firsts: Snow camping, the, albeit mild, storm, crampons, snow travel on the slopes. For me, I enjoy the solitude and peace of mind the mountains can bring. I feel we both had a successful and enjoyable trip.