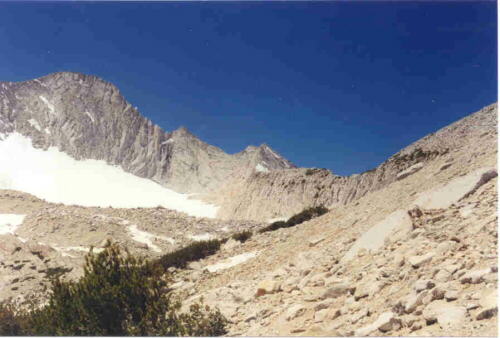 So here is my Mount Conness trip report.

Basically, I am just happy to be OFF of that mountain with my life still intact!!! There were some sections I was very uncomfortable, including some steep and dramatically exposed sections where every time I’d take a step upwards, my feet would slide down the mountain several inches because the rocks/gravel/dirt was so loose. This was not fun at all. The most scary part, however, was trying to traverse a near-vertical 30-feet wide snow chute by kicking steps. This turned out to be something straight out of the TV show “Fear Factor”. In fact, both Richard and I took separate falls of at least 10 feet, which LUCKILY we were both able to arrest with our ice axes. But had we not been able to arrest our falls, there were boulders about 300 feet below we would have landed on. Way too much excitement than I could handle so shortly after we decided to turn around instead of head for a scary-looking knife-edge ridgetop that lead to the summit, still 1300 feet above us.

But heading back was pretty awful too! We had to downclimb, which took absolutely forever and was much more uncomfortable than hiking upwards. In fact I was moving so tentatively with the loose rock/etc. that we set up a 200-ft rapel for myself in a section (on Richard’s single, 8.5mm-diameter 60m-long rope no less)… that felt a little better and faster, if not even more risky. But still had to do a lot of downclimbing until, after several hours, we found a trail with solid ground… but even that was terrible because we were viciously attacked by mosquitos for hours (even after I put on bug spray!)

And I haven’t even mentioned the huge migraine I had while trying to downclimb at 11,500 feet, which thankfully some Tylenol, Cytomax (thanks Richard!) and lower altitudes solved, but made trying to keep my balance on loose ground near impossible.

The good thing is that, miraculously, we managed to get back without injury aside from some scrapes and a gazillion mosquito bites. I also learned a few things about myself: 1) I am not nearly as masochistic as some people think, as I definitely was not finding the uncomfortable sections fun, and 2) I do not like challenges where one’s life is clearly and needlessly at stake.

I also resolved that I need to switch over to a safer sport than mountaineering, like bowling or tennis or something. At the very least, when I decide to hike up another mountain, it’s going to have a pre-defined trail where it’ll be much more difficult to slip and get hurt or injured. I have no desire to do something like the Conness North Ridge Route again!

WARNING: Please be careful on this mountain (and actually, any mountain!) Mt. Conness in particular has claimed a number of lives. Please see my memorial to Stephen Cook for more information.

Felix I share your description of your experience. Hours ago just returned home to Dallas, thank goodness alive and in one piece. Unlke you I climbed conness starting from the east. I consider myself inexperienced even though I successfully climbed half dome several times, cloud rest and hoffman twice. Being at sealevel the day prior to conness it kicked my butt. It was 6pm when we got to the final plateau finally seeing the summit, with 2 hours of daylight left we knew we were in trouble BIG TIME. I am still shocked that I am in one piece. We were just above upper connes lake when only the moon and a headlamp lighted my way. In the dark we go down only to realize we must go back up and over to go down. We did this over and over. It was 11:30pm when we collapsed at my buddy's car. I will stick with fishing as I will never attempt a climb like this again. I really appreciate your article. Good Luck to you. Stephen Cook RIP

Sorry you had such a crappy time on Conness. I've climbed the mountain several times from different routes and the best so far has been the North Ridge. The first time I did it was solo. Worked my way up the long curving ridge to the tower in a freezing wind, did the rappel into the notch and looked up at the summit ridge and said, "uh oh... what now?" At that point it was either climb the thing or do about 20 rappels down the west face to get off. So, I started traversing diagonally up and across the west face, searching for the easiest route, scared pretty much out of my mind. Finally made the summit, totally wiped out and fell asleep in the cold wind. Next was the long descent down the east ridge back to Saddlebag Lake. A very long day to say the least, but a beautiful and memorable climb. ↩Reply