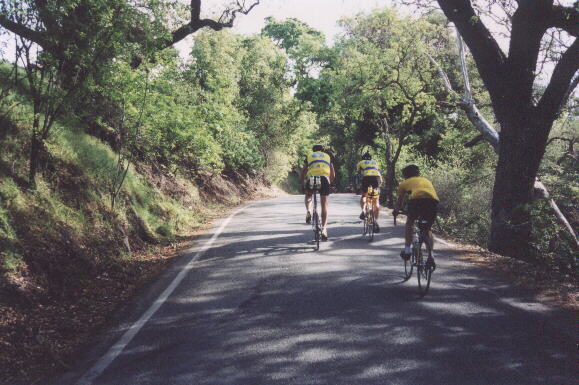 “If the weather is anything like last year,” wrote a friend who was also riding the Tierra Bella, “I will forfeit my $26 registration and stay home.” While I certainly wasn’t going to bail due to the weather conditions, I definitely shared the desire to have a nice-weather day in Gilroy. So during the preceding weeks I was checking the weather forecast daily: which would alternate from partly cloudy, to rain, showers, cloudy, rain, showers, just cloudy… what would it be. I would only find out for sure the morning I awoke, at 5:00 a.m. no less…

This year I decided to ride the Tierra Bella (200km course) on my trusty Cannondale, for two reasons: (1) I still had not fixed the steering bracket on my recumbent, which broke at Mile 160 or so during last year’s Knoxville Double Century, and (2) last year I was surprised by the amount of climbing in the ride. I ended up even bypassing Metcalf Rd. last year, something I wanted to complete this year. As I still am not conditioned enough to climb as well on the recumbent, Canny was the steed of choice this time.

I got to the start of the ride 6:45 or so, but had to stand in line for both registration and the bathroom. The men’s line was really long for the latter. However, it was mainly for the toilet, not the urinals. Why is this always so at the start? Hello, people, do your poop thing before you leave your house, and you’d be okay for the rest of the day.

Anyhow, afterwards I met up with a number of familiar faces: Steve, Russ, Everitt, Manuel, and John, all from the Tri-City Triathlon Club. Purportedly, Sharon was there too, but would be riding the 100-mile course, along with Steve. So I waited for Russ, Everitt, Manuel, and John, and we all took off at 7:40 a.m. or so. Immediately, we were riding in a pretty tight paceline, at a fairly good clip.

In this paceline, we were passing many, many riders. We were certainly not going all out, but we were trading pulls every couple of miles, and going probably a bit faster than I normally would have on a 200km ride.

This first leg, a loop around the Uvas Reservoir (I think), was certainly the most scenic part of the ride. Trees lined the road everywhere, and the few homes that were present were ranch-like, some of them mansions. In the paceline, however, it was hard to notice some of this, as there’s too much concentration required for riding. Concentration so that one does not overlap or touch someone’s wheel. Or allow a gap so large that one is out of the draft. Or maintaining a steady pace in the front so as not to disrupt a paceline. Or trying to look out for potholes and other dangers which are much harder to notice while riding in a group. Reasons I still am not too fond of pacelines despite being able to ride faster.

But that’s the way it was until the Machado School Rest Stop. We did not stay for very long. I munched on a banana or two plus so cookies, filled up my water bottles, and off we went.

In this leg, there were more hills, one of greater signficance. Steeper and/or longer, that is. Or maybe that’s just how my legs felt at this point of the ride. We still kept up our quick pace–an average speed of 18mph including stops up to this point, although in truth we were maintaining low- to mid-20s most of the time.

A person who particularly impressed me during this leg was Russ, who with his build (very tall and strong) has never been the most natural climber. However, as he told Everitt and me, he had been working diligently on his climbing all this year, and it definitely showed. He was not getting dropped at all, and it was extremely inspirational to see how far he had come in such a short period of time. He mentioned he was riding to work many mornings and even taking the long way to add on some hills. I’ve only been riding once or twice a week or so. I definitely want to get back in a mode to where I am riding at least 4X a week again.

So over many rolling hills we went, to the Hot Springs Rest Stop. Many hundreds of riders were here, most doing one of the shorter routes. To my disappointment, the rest stop was already completely out of food except for Cup-O-Noodles. What happened to the great food and support that people kept raving about during this ride? Anyhow, I opted to stand in line for a Cup-O-Noodles while the other Tri Club members decided to roll on. “Let’s get to the next rest stop before too many people do,” said Everitt. Good idea, but I was hungry. I wave them off and that was the last I saw of them during the ride.

It was probably just as well that I was riding alone again, as I wanted to concentrate less on riding and more on musing and enjoying the scenery. And as it turned out, I was also not feeling so strong after a fairly rapid first 45 miles.

In fact, at Mile 50, I was pretty stunned at just how poorly my body was recovering. I had just done a self-supported 107-mile ride 2 weeks prior, from Fremont to the beach and back. I felt good then and my body had a ton of time to recover from that effort. Sure I wasn’t in the best shape of my life back then, but I expected that that ride would have prepped my body better for this one? It’s been a long time since I’ve felt that tired at just Mile 50. It seemed to confirm my fears that my meager training was having a profound effect on my fitness.

Scores of riders, some on mountain bikes, were passing me for the next 10 miles. On top of that, there was a headwind, and worse, allergens in the air. My eyes were really itching and I had to stop a couple of times to wash them out. I normally do not have allergies but that day I sure did. And they surely played a role in not feeling so well, both mentally and physically.

But I soldiered on. I got to the Omar Rest Stop, only to learn that there was no food… again. Luckily I still had a couple of protein bars of my own I had brought along. So I only stayed long enough to fill up my water bottles before I was back in the saddle.

Remarkably, by this point I felt quite a bit better, like my body finally was recovering. I was by no means hammering, nor would I classify it as a second wind–but at least I was able to keep pace with some people.

I did have to stop yet another time to rinse out my eyes, but felt good enough to bypass Rest Stop #4 at Coyote River Park altogether. After which, whereas almost all other riders at this point went straight for the shorter routes, I made a right turn towards the Coyote River Trail, after some confusion about directions like last year.

At least this time I was not getting lost ON the trail. The winds were still blowing hard towards me, but that was an old story at this point.

Middle of the trail: a support dude manning a station, mainly to tell riders that Metcalf Rd. (and its gruelling climb) was just a couple miles up. I had only about 5 oz. of water max at this point so I asked if he had any. “I have no water here,” was the reply, “but there’s a rest stop at the top of Metcalf.” Same story.

So to the base of Metcalf I was basically just sipping whatever water I had, if only to keep my mouth from going dry. I spotted a Port-a-potty at a park for fishing at this point, and I stopped here too to rid myself of a few more ounces of fluid. I prepared myself mentally for a grind.

And a grind it was. This climb was steep, nor did I know how long this hill was. (I lost my map somewhere a few miles back…)

Within a few minutes I was going a pace in which I was sure I could have walked just as fast. My Avocet cyclometer, as it had a habit of doing in the last year or so, was not registering any speed as I was going so slow. Demoralizing. However, my cadence sensor was still working. I was spinning at 33 rpm in my lowest gear, a 32 X 23. That translates to (via calculation in Excel)……………. 3.7 mph. Wow. Okay, maybe I was going more than walking speed, though barely.

It would take me about half an hour to get to the top. Just for 2 miles. It reminded me a little bit of the climb up Skaggs Springs in the Terrible Two as it was unshaded and relentless. Metcalf was less brutal, but still an accomplishment getting to the top.

A rest stop greeted me shortly after the top of the climb.

At the UTC/CSD rest stop, I was told, “it’s all downhill from here.” Good. But despite being totally wasted after the climb, I didn’t stick around here long except to fill up my bottles with water I desperately needed, and my pockets with some food. I knew my average riding speed until the end would be abysmal, and I would have to keep my stops to a minimum in order to get back at a reasonable hour.

It never occurred to me that there was still 50 miles to go at that point. I was low enough on energy that doing such a calculation was too much for my brain. Indeed, I’m not even sure what I was thinking of during those last 50 miles, except that “wow, I’m out of shape.”

A number of riders (all of them who would pass me) noticed my custom 1999 California Triple Crown jersey, the one I earned for doing the CATC Stage Race and doing 5 doubles in a year for the 1000 mile club. Usually the comment would be something like, “Wow, that’s an impressive jersey”. I regretted wearing it on this day though, feeling totally undeserving it with the way I was riding.

A more thought-provoking question was posed by another rider who passed me at Mile 110 or so. “After earning a jersey like that, why do you even ride any more?” To which I replied as the rider sped away, “to keep in shape.” Which, I suppose is a part of the reason. But moreso is this: to keep from getting old. I’m still a few years away from being 30, but I am no longer the 21-year-old punk kid doing his first CA Triple Crown with meager training, no sleep before races, poor race strategy, yet full of boundless energy and enthusiasm. And for as long as possible I do not want to have to say, “Man, when I was younger, I could do [insert athletic achievement here], but now that I’m XX years old, I can’t do it anymore.”

So I keep on riding, to prove to myself that I can still do something I used to be able to. And because it’s fun. I can say this with a straight face even after getting to the end of this allergen-filled ride, just relieved to be able to see the miles go by on four wheels instead of two, where I could at least rest my legs and let the BMW Z3 do the propulsion for me.