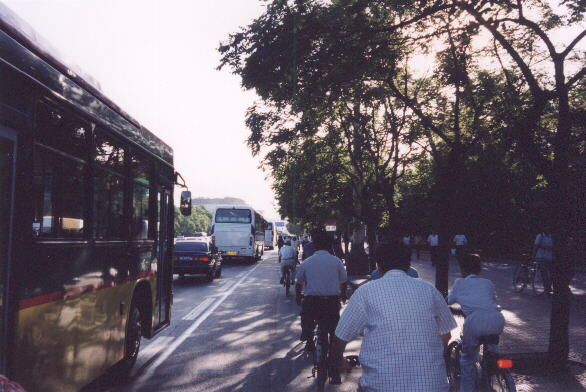 Upon arriving in China, two things were immediately apparent regarding traffic: pedestrians do not have the right of way, and the drivers drive like lunatics! Regardless, one afternoon I rented a bicycle and embarked on a 30-mile exploration journey in Beijing.

My wheels: a single-speed mountain bike made by Giant. About 30 pounds, it nevertheless looked decidedly more upscale than the old beat-up clunkers dominating the roadways, and rolled great. It cost about US$6/day to rent from the New Otani Hotel.

Not having a map or really knowing wherere anything was, I decided to stick with just a couple of major roads. First I headed east and then north to the Worker’s Stadium, after which I retraced my steps, went west, past Tiananmen Sguare, before heading back to the hotel.

One would think that with the drivers and traffic laws, it would feel very intimidating to try to bike through a big city in China, but it didn’t feel that way at all. In fact, bike lanes are so wide and there are so many bicyclists, all a new cyclist has to do is fall in line and join in the fun.