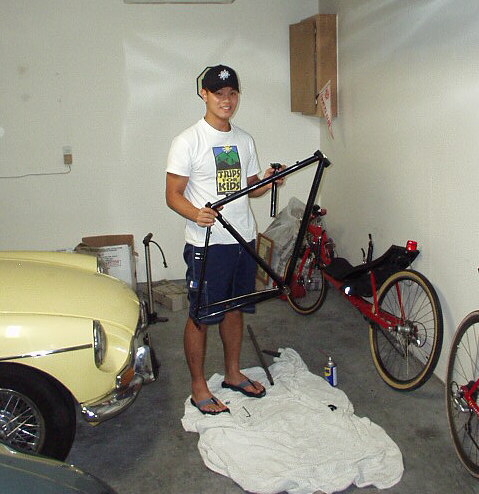 A seemingly not-too-uncommon problem encountered by bicycle enthusiasts is a stuck seatpost. This is almost always a consequence of not putting grease (or, better, anti-seize compound) on the seatpost before inserting it into the seat tube, and over time, the seatpost virtually “fuses” with the seat tube via oxidation.

My friend Dave had this problem recently with a near-new Ibis frame. He attempted the following (all of which were suggested on USENET newsgroups) to no avail:

He then came over to my home for the two of us to give it a shot.

The method we then successfully used was attaching a long (approx. 3-foot) square tube (e.g., from Orchard Supply for under $5) to the seat post via the seat post clamp:

Then, while Dave held the frame firmly on the ground, I used my strength + the tube’s leverage to turn the seatpost. At first the seatpost would only turn very “notchily”: the rotational action was not smooth at all. We then applied more WD-40, though, and kept turning the seatpost (via the square tube) in a counterclockwise direction. It then fairly easily came out. See the photo at the top.

Cheers for posting this... my next attempt was going to involve a stick of dynamite and a one tonne weight (Road-Runner cartoon style)... I'll give this a go instead. ↩ Reply

Last year I had a seatpost that was terminally stuck and I resorted to a somewhat different brute force approach to remove it: rope and pulleys from my rock climbing gear. In my basement I have two very strong tubular steel posts that I used as anchor points. I laid my bike on its side on a foam pad and anchored the bottom bracket shell to one post with a short length of 1" tubular webbing. The seatpost was hooked up to the other anchor point with an 8:1 pulley system and static rescue rope. I used prussik knots as a 'ratchet' to capture the rope progress so that I could take my hands off the rope between pulls. After several pulls to take the stretch out of the system, the seatpost popped right out. Had I not had the rope and pulleys, your "long lever" method would likely have been the only other option. ↩ Reply

Use a hack saw blade to gently, carefully, slowly cut a kerf in the inner diameter of the seat post. Use a fine metal hacksaw blade with a few turns of tape around one end for a handle. Make a few strokes, take a look, make a few more. You'll get a good feel for what you are doing in a few minutes. In less time than it takes to get to Home Depot and back, you'll have the seat post out. When the kerf is nearly through the wall of the post, twist the post with a pair of channel-lock pliers, Vice-Grips or a monkey wrench. A big mug of hot tea will still be warm when you're done. ↩ Reply

Thanks for posting,i found this last nite after finding the seatpost completely glued to my carbon dolan mythos frame.

i was dubious at using any other method i had found on the net till i found this one.

As you can expect i was worried about killing a £1,000 pound frame!!!!! ihad tried to twist the thing using the saddle attached and nearly gave myself a hernia and severe back problems!!!!

SO found a long peice of iron in the shed that woud fit into the seat post clamp.drilled a hole in it to secure seatpost bolt through. sprayed copious amounts of wd 40 around seatpost entry point amd within five minutes of creaking and twisting,oh and the wife holding down the back wheel........the bastard was out.....complete post with no damage and more importantly no damage to my carbon frame,which incidentally had an alloy insert approx 6 inches down the frame,this is why the post got stuck.....fusion of metal to metal it was covered in a white sort of residue......no not cum...lol.

any how a good result and me mug of tea was still hot when i finished.........effin good leverage is the answer cheers Davis. ↩ Reply

fantastic!!!!!! worked for me on a carbon dolan mythos frame.Spent hours day before trying to remove it with the seat.

most carbon frames have an alloy insert approx. 6 inches into the frame so mine had welded itself and it was really stuck.with the seat in place trying to twist it nearly killed me!

the long leverage method is a winner .......cheers for posting this. ↩ Reply

Wonderful page, the long square pipe idea saved the day for me... thanks and blessings! ↩ Reply

I just picked a few days ago an old road bike in a thrift store for 16bucks. started cleaning the frame, removed the gears shifters and all the things that goes with it (I'm a single speed guy)... then came the seatpost. it was stuck, trying to pulling it, twisting it, wd40ing it...nothing worked. so i went to the closes bike shop... the guy didn't really tried. on my way back home, I said "That's it, you are coming out TODAY!". so a removed the wheels, turned the bike upsidedown and stuck the top of the tube in a the bench's vice. then came the twisting... and it came out. a little scratched, but I was planning to replace it anyway...

Unfortunatly, the seat clamp that your lever is attached to is usually just bonded to the seatpost's tube, as during normal use, there is only mild rotational force from the saddle.

Thus, if the seatpost is really stuck in the frame, the seat clamp will start rotating, not the entire seatpost. ↩ Reply

That's what happened with me today.. Seatpost between the bench's vise and the Seatclamp started to rotate, and not the seatpost.

I'm going to drill a hole trough it now an put a piece of steel true it so i can twist it.

Hey there, I had a seatpost that I tried every trick on and none worked. So I made a simple tool I'm calling the Seatpost Extractor. See my website: www.seatpostextractor.com ↩ Reply

Looks like you came up with a useful tool and I think I understand how it works. Nice work! ↩ Reply