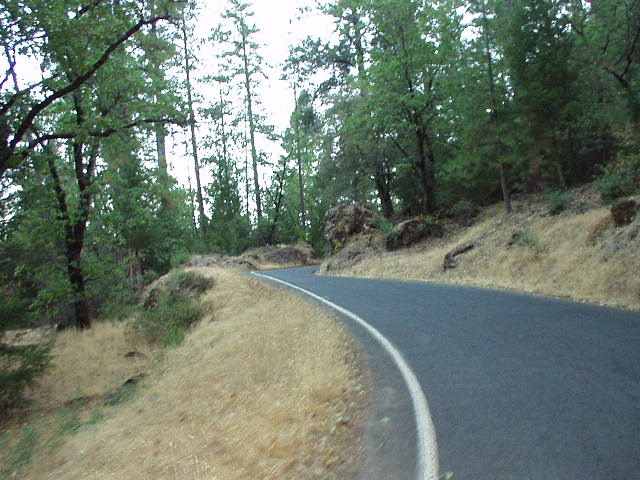 “The Superstar Loop was tougher than the Hawaii Ironman,” said professional triathlete Bob Koruck, who apparently was just “one of only 3 humans to finish the 140-mile course” prior to this year. “The ride passes historic gold rush towns, wild rivers and tributaries of the American River watershed, glorious forests teeming with wildlife, pristine Alpine lakes and face some of the toughest climbs imaginable – steeper than anything found in notorious Tour de France routes like Alpe D’Huez,” proclaimed the World’s Toughest Century web site. Cool.

So despite having 2 hilly double centuries planned for the subsequent weeks, I just had to sign up for this ride. An extra incentive: it turned out that Steve Larsen, professional cyclist-turned-triathlete, would be giving the Superstar Loop a shot himself. (Alas, it turned out he couldn’t make it after all, due to an injury that sidelined him.) He’s awesome: in 2001, he won the very first Ironman triathlon he entered, qualifying him for the Hawaii Ironman World Championships. Then in Hawaii, he annhilated the field during the bike portion before succumbing to stomach problems in the run. He still managed to finish 9th and totally changed the dynamics of the race. A great inspiration!

Keeping in my late-arriving tradition, I got to the start of the ride at the Auburn Overlook Park at 1:00 a.m. This allowed me to sleep in the Z3 for 4.5 hours… sort of. Things kept waking me up, including a group of teenage punk kids with nothing better to do at 2:00 a.m. except come by the park and make a lot of noise and overturn garbage cans 100 feet in front of all of us cyclists sleeping in our cars.

Anyhow, the ride. I started out at 5:20 a.m., 10 minutes before the official Superstar start. I had my taillight (which I would lose later during the day) but no headlight. Fortunately, the course was extremely well marked with chalk, with super-long arrows marked well through turns. This was greatly appreciated considering I had to ride about an hour in darkness.

The first 40 miles were predominantly uphill, with the highlight being Iowa Hill Rd. This climb, characterized by numerous and tight switchback turns, begun with a steep 2-mile section of an average grade of 13%. (Some of it was probably 16-18%!) I took my time though, staying relaxed in the saddle, and it really didn’t feel that bad.

Mile 40-50 offered a welcome reprieve from all of the climbing, but the rest stop at Mile 50 was slightly disappointing. This is where I first encountered lousy service and inadequate food supplies by the ride organizers. There were plenty of Clif Bars and Clif Shots, but almost virtually no “real” food. A female staffer was making peanut butter and jelly sandwiches, but even though there wasn’t a long line for them, she was much busier blabbing her mouth off than smearing peanut butter and jelly on bread. After watching her for about 3 minutes, I realized it could be another 2 minutes before she would have finished making one for me, plus she had just thrown away what looked to be the last jar of peanut butter, so I just grabbed a couple of Clif Bars and took off.

By Mile 62 or so I had finally caught up with a bunch of Century course riders. But the real test of the day was yet to come: the infamous Corkscrew Wall, which would ascend over 2000 feet in just 3.7 miles!

Mile 63: let the real fun begin! A rest stop was situated right by a handmade sign proclaiming the start of Corkscrew Wall. I stayed long enough just to fill up my water bottles and to get another course map (since I lost mine sometime earlier in the day), and was soon riding over some large-character words scribbed in chalk on the road: “Only those who dare truly live”. So true.

Corkscrew Wall started out steep, and I remained in my 32X23 low gear during most of it. Yet, I was could only spin about 35 rpm for much of it, or 3-5 mph! My breathing and heart rate stayed well under control though, so it didn’t feel too bad. More words on the road:

“Pain makes me feel alive. -Lance Armstrong” There was even a poster of Lance by these words.

“[arrow] Scenic Overlook” Something to get our minds off of any pain we were feeling at that point, I guess!

“You paid $ to do this?” were more words midway through the climb, acknowledging that, yes, we are insane!

After the 2nd mile of the climb: it looks like the road is actually leveling out, and that there’s a slight downhill! “Is this the top?” asked yet again more words on the road.

But of course the answer was, no! “That was the Wall. Ahead is the Corkscrew”

And steeper it was! I estimate 16-20%, and for an extended period of time! Several cyclists had stopped to rest by this point.

But I knew if I had stopped, it would be hard to get on going again. And knowing there was just a mile or so left was invigorating. “Dig deep,” I kept telling myself. It worked: soon enough, I was at the top, knowing that the worst was now behind me.

At Mile 77-79 was a sneaky little 500′ climb which again I felt fine on, though I had just about consumed all of my water at this point. A water stop was at Mile 81, but by the time I got there, a cyclist was filling up his water bottle with the LAST of all available water there. This was disturbing: there was still 12 more miles to the next rest stop, including a slow climb up to Uncle Tom’s Cabin (a name of a town in CA). I had hydrated well up to this point, stopping at all rest and water stops to fill up my water bottles in addition to usually downing a whole water bottle at the stop itself, and I only had about 5 oz. of water left!

Disappointed, I took off right away, not wanting to extend my time on the road without any water. However, at Mile 85 or so, my front tire started feeling a little soft. Darn, slow leak! Knowing that downhills were ahead I stopped and changed the tube, even though it still seemed to be retaining some air. Unfortunately, I fumbled around with my CO2 inflaters, and wasted one cartridge. In the back of my mind was the thought that I was now down to one spare cartridge and tube, so I really hoped that I would get no more flats.

More optimistic thoughts: right when I was done putting my front wheel back on, 2 young women in a Volkswagen Jetta who were staffing the ride stopped and asked if I needed any water (since the water stop before had run out). They only had a 2-liter bottle of mineral water, and hence asked me not to take too much, so I just took half a water bottle. This proved to be enough to get me up to Uncle Tom’s Cabin.

At the rest stop at Mile 93, I (and about 2 dozen other cyclists) had to wait for 15-20 minutes for a “pilot car” to come and lead us down a 6-mile stretch of road that was undergoing new paving. It was mostly downhill and fun being in a group of >20 cyclists just following a lead car. Eventually, the group started to spread out, and feeling strong, I took off ahead, only to hold back on the descents a bit because even with the new tube in my front tire, it still seemed like I had a slow leak. I kept envisioning that if it blew during a downhill, I was in deep trouble!

I was able to allay some of those concerns by being able to borrow a floor pump from a SAG vehicle and inflate my front tire up to 110 psi, a bit more than what I’d normally pump it to. It stayed solid for the rest of the ride, down Highway 193, and then up Highway 49, in which myself and 2 others really hammered up a 2-mile climb that probably averaged around 10% or so.

Finally, the City of Auburn was within sights. So then it was time to congratulate ourselves: the World’s Toughest Century had proved not to be too tough after all. In truth it probably was the most difficult metric double I have ridden, including the epic Markleeville Death Ride, but it didn’t feel that way, as I still felt fairly fresh at the end of the ride. Diligent training really helped. Looking forward to the next ultra-marathon rides coming up in the next couple of weeks!