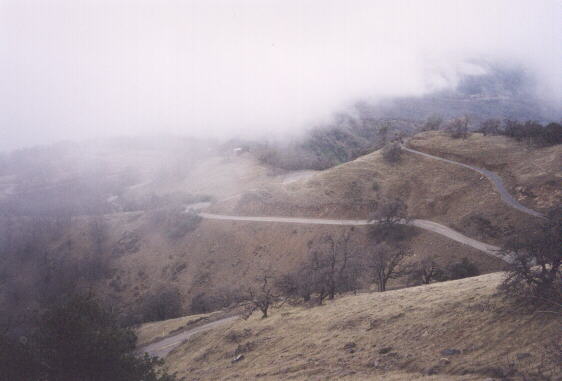 If long climbs are your thing, this ride is for you: over 6000 (maybe even more than 7000) feet of climbing in 100 miles! Starting from Fremont’s Central Park and going through Milpitas, the ride has only “baby” rollers until you get to Calaveras Rd. Then, you climb up to the backside of Sierra Rd., which while not nearly as steep as going up the front (westward-facing) side of Sierra, it will certainly get your heartrate up! Just a few miles is the real test: Mt. Hamilton Rd. to the Lick Observatory. At 19 miles (with 4000 feet of elevation gain and only brief downhill/flat sections), it is probably the longest climb in the Bay Area. Faster riders may do it in 1.5-2 hours, but for most cyclists, especially with 30 miles already in your legs, it may take 2-3 hours. The views at the top, at least when there isn’t fog or snow, make it worth it, however!

Lick Observatory also serves as a convenient place to fill up your water bottles, eat lunch, and stop at a restroom. Afterwards you descend Mt. Hamilton and its hundreds of switchbacks. You can virtually coast all the way down for 45 minutes to an hour, though I’d recommend extreme caution on this road. There are literally hundreds of blind corners, and even if you stay within your lane, cars and motorcycles often drift into your lane.

Finally, at mile 65, you are back at sea level. Go back to Calaveras Rd. via Piedmont, or if you felt like you hadn’t been climbing enough (unlikely!), you can climb up the front side of Sierra Rd. to Calaveras. This time, however, take Calaveras all the around by the Calaveras Reservoir and to Niles Canyon Rd. (Highway 84) in Sunol, and back to Fremont. The last 30 miles of the ride, including parts of Calaveras Rd. and Niles Canyon, are predominantly flat. You deserve it at this point! I promise it’s a good workout!

Last day of 2001, and what better way to celebrate the end of the year with a century! I had intended to go up Mt. Hamilton for weeks now, but yet have not done so until now.

I got started a little later (8:30 a.m.) than I had planned but I still figured upon getting home by sunset. Brought along 4 peanut-butter half-sandwiches and some crackers along with 2 water bottles, but definitely was wishing I had brought more food by the end of the ride!

One reason for this is by the time I got up to Lick Observatory, I was famished. It took me a whopping 2 hours and 30 minutes. In the 1998 Bay Area Hill Climb Series, it took me about 1 hour and 45 minutes, which still was not fast compared to most others in the race. However, in that race I had 0 miles in my legs before the start of the climb, as opposed to 30 today.

Down below it was actually quite warm and I thought I had brought way too many clothes when I left the house. (Windbreaker, 2 jerseys, fleece socks, “lobster” gloves, and even a balaclava!) However, after lunch at the top, storm clouds were moving in, which at the top actually appeared like dense fog. I was wearing everything I had going down the mountain, staying sufficiently (just so) warm.

The climb had taken enough out of me for the day that going up Calaveras Rd. afterwards, including the Calaveras “wall” (very short but very steep) section the the east of the Calaveras/Felter intersection, was an exercise in mental determination. However, I turtled my way up, and went slowly all the way back home, in darkness. Should have brought lights! Entire ride took about 10 hours!

On Saturday I went up Mt. Hamilton again, but this time on my recumbent with the Tri-City Triathlon Club. The route was somewhat similar to that described above except that it bypassed Calaveras Rd. altogether, going to Mt. Hamilton directly.

Here are excerpts of an email I wrote to a friend immediately after the ride, largely comparison the experience on the recumbent with that of my Cannondale the last time I went up.

So I went up Mt. Hamilton with the Tri-City Tri Club today. My friend Russ organized this ride because he and another friend (Steve) will be doing the Death Valley Double next month (so will I). Mt. Ham is almost exactly the same in profile as Salsberry Pass–a gradual 3700-foot climb over 16 miles with a very short reprieve in the middle. Both climbs have kicked my butt on the Cannondale as they are so long!

But since I will be doing DVD on the ‘bent I rode that today. I was concerned I would get dropped since on long or steep climbs I just can’t ride it as fast as on my regular bike. But I figured, if I was really lagging, I could continue on while the others took a traditional rest stop at a park in the middle of the climb, so we could all get to the top at the same time.

To my satisfaction, though… I wasn’t lagging at all. I stayed with them the entire way, and still had stuff in reserve. In fact, I don’t think we were going any slower than the last time I went up Mt. Ham (many months ago). And I felt MUCH better! Usually, about halfway up, or already an hour and 15 minutes into the ride, my back will start to hurt a little. Extended periods of climbing does that, though with all the training I’ve been doing, it seems to take longer and longer for that to happen. But on the ‘bent, absolutely no discomfort anywhere–just my quads and my hamstrings, which were doing a lot of work!

So when I got to the top, I still felt (relatively) fresh. The two times I have gone up the front side on my ‘dale (I seem to prefer the backside, which is steeper but only 5 miles), I’ve felt just wasted. I even dubbed Mt. Ham “my nemesis” because of that.

And usually, on my regular bike the descent is little fun because their are so many switchbacks and I’m on my brakes the entire way (+ gravel in some corners). Plus, my back would normally already be hurting, and being bent over on the drops on the descents doesn’t help things.

But today, on my recumbent, the descent was actually fun!! It felt like, well, driving a car… all laid back in my seat, just braking, and going around the corners almost telepathically. There is so much bottom bracket clearance with the ‘bent that I never have to make sure that the inside leg is high around a corner. Furthermore, the center of gravity is so low that I don’t have to lean the bike nearly as much as my ‘dale. Due to the long wheelbase it feels extremely stable. Yet, to go around a corner, I don’t have to (1) push down on the handlebars, (2) push down on the outside leg, (3) countersteer or do a huge lean, or (3) shift my weight back while braking to prevent doing an over-the-handlebars thing. In fact, braking on my ‘bent seems much better than my Cannondale due to the V-brakes and the more balanced weight distribution.

All of this in the last paragraph sort of caught me by surprise (pleasantly). I just haven’t ridden the ‘bent down such technical terrain enough to know how it corners. In fact, once in a while I’d be (out of habit) doing things like keeping the inside leg high around a corner which is entirely unnecessary on the ‘bent! It really handles like on rails when the pavement is good.

I think the only time I felt more comfortable on the ‘dale going down Mt. Hamilton was around corners when the pavement was really rough. The unsprung weight of me + the recumbent is a lot higher. On a regular bike, the unsprung weight is generally just the weight of the bike, since you can use your legs as suspension (just lift yourself off the seat a little bit). You will naturally find yourself doing that when you have to go over a bump, I’d bet. With the recumbent, though, your body is always firmly planted in the seat. Hence, when I hit a bump, the unsprung weight is about 175 lbs., instead of the Cannondale’s 20 lbs. (My recumbent weighs ~26 lbs). The consequence of this is that when I hit a bump, the impact is higher, and the rear wheel will bounce off of the ground a little more. In a corner this results in less traction. There was one really corner that felt a little scary when this happened since there were cars going in the opposite direction plus there was a car right behind me. If I went down it could have been really bad, not so much from hititng the ground (every time I have fallen on the ‘bent, I’ve never got hurt or even scratched, since it is so low), but because of the potential of getting run over.

Anyhow, this message is getting really long but my points are (1) it, very surprisingly, seemed EASIER going up Mt. Ham on the recumbent since I felt so much more comfortable, and (2) I felt a lot more confident and faster descending on the ‘bent too!

After doing the ride (77 miles) with the Tri Club I added on some “exploratory” miles around Fremont, not riding hard at all, just to see places in Fremont I haven’t checked out yet, including the new Quarry Lakes. So I managed to do a century today after all!