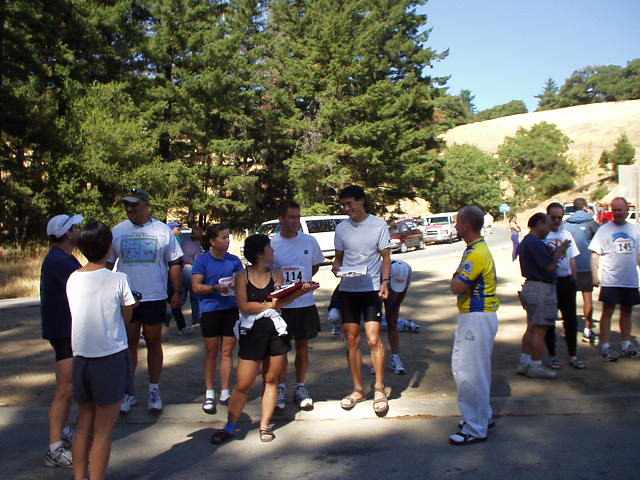 “The Relay” is an annual 199-mile run from Calistoga to Santa Cruz. According to the website, the course boasts the largest number of tourist destinations of any run, through the wineries of Napa Valley and Sonoma County, bayside Sausalito, the Golden Gate Bridge, Crystal Spring Reservoir, and the Santa Cruz Mountains including Big Basin. Several segments would even be run under a full moon.

This was the very first time for all of the Tri-City Triathlon Club members, except for Al, who had run it wzith another team a couple of years ago. None of us, therefore, really knew what to expect or what exactly how to prepare for it. This is where Janette, wife of Everitt, came in to save us. Even though she wasn’t running, she did such a fantastic job organizing everything that all we basically had to do was show up. In the words of Herb, she “made a logistical nightmare run as smooth as glass. We even had duct tape for our signs.”

On the day of the event, we utilized 2 vans (like all the other teams), with 6 runners in each. I was in Van #2, driven by Ron’s brother Randy. Van #2, for some reason, seemed to be victimized more than Van #1 by other teams. For example, whereas Van #1 pulled into the first van exchange point adorned with the Tri-City Tri Club logo, Van #2 was tagged in a less-than-elegant fashion, including the proclamation “I love Texas” and “VIRGINIZED.”

Despite having to be on the move most of the time, we (in Van #2) still managed to eat fairly well especially while the runners of Van #1 were doing their legs. For example, before our first legs, we had a nice pasta meal at the Napa High School Van Exchange Point, and made a Safeway stop afterwards. In the middle of the night we even stopped off at In-n-Out, which was rather filled to capacity with high school teeny-boppers. After Al’s blistering third (and last) leg in which he ran at a sub-6-minute pace, we even (at his insistence) dropped by a store near Big Basin to get some beer–this before Tom or I had even done our last leg yet.

We also seemed to get a decent amount of sleep despite the cramped quarters. As usual I took full advantage of my talent for being able to sleep upright in a car seat (having something of a reputation for sleeping in 2-seat sports cars the night before and/or after double centuries), whereas Ron managed to find lots of comfort in napping in a sleeping bag right on the pavement of the parking lot.

The weather was very cooperative and pleasant except for some sections near Pacifica, which were extremely cold and damp. There were also some really dark areas where potholes were not discernable, causing both Bic (I think) and Sharon to take a fall. Bic had badly bruised her leg and Sharon twisted an ankle, but amazingly, both were able to not only carry on, but run without losing any apparent amount of time whatsoever.

In addition to Al’s sub-6-minute effort, I got to witness a couple of other really gutsy efforts. One was at Saratoga Gap, where after a 3-mile “very hard” leg that was all uphill, Steve came sprinting in yelling “eight! eight!” At first I thought he was yelling something about needing food (“ate! ate!”), but he was actually referring to his “roadkill” count on that leg–or the number of people he passed. It was especially impressive considering that most of my roadkill counts were zero or negative.

Another really gutsy effort was Everitt’s last leg, also classified as “very hard.” It started out being flat or gradual, but then ended with over 2 miles of a very steep uphill on Empire Grade Rd. In fact, it was so daunting that after Van #2 got 2/3rds up it to the runner handoff point, Randy would remark proudly, “PHEW! The van made it!” But somehow, despite the van struggling slightly, Everitt amazingly ran the leg at a 7-minute pace. He even arrived at the checkpoint (where I was waiting to take a handoff from him) earlier than I expected, after which I got to finish the last 1/3rd of the hill. To me it certainly felt as steep as it looked.

About how I ran, it seemed like after the first 2 legs I was already amazingly sore, and actually could hardly even walk, but due to the pressure of not letting down one’s team, I managed to run the third leg okay regardless of how much my legs were protesting. Considering how little I had been running prior to the race, I was happy with my times. In fact, I only could run one of my legs (the 2nd one, classified as “easy”) at my best 10k pace, and the other two about 30-60 seconds off-pace. (Fortunately, Tom was totally making up for this by completely blowing away his estimated times.) However, I did manage to have enough in reserve to sprint in at the end of each leg, the most memorable coming after my 2nd. I had been slowly catching up to a runner for the last 10 minutes or so, only to catch up to her with about 100 meters to go. I don’t think she liked that too much because once she saw me (when I was like 2 feet behind) she screamed “DAMN IT” and started taking off in a frenzy. And then so did I, blowing right past–it was a pretty wild finish. Well at least I got my net roadkill count back up to zero for that leg.

The race ended right on the beach of the Santa Cruz Boardwalk, in which the race organizers announced our team name when Tom finished his leg. We got our pictures taken and received our medals. It turned out we finished in the top 32%, which I thought was pretty good. I’d highly recommend this event to all.

I would like to say that I had a terrific time doing the relay race. Even though I didn’t quite put in the proper training time I got by on nerves and peer pressure knowing that my time was being recalculated about every 5 minutes while I was out on the run. Thanks to Randy, Janette, Laura and JC.

What I miss the most is being able to work out and compete with such a supportive group of people. My body is almost back to normal as of today and I have a great appreciation for those handrails on the stairs leading up to my office. What a great invention. I almost feel that workout bug coming back and maybe I’ll get serious now so I’ll be better prepared for next year. I think it’s a must do race besides I was getting used to sleeping in a parking lot in San Francisco. I do think that we’ll have to get some better ventilation for the car next year. Nothing like a car full of sweaty guys, yeah right.
Thanks again to all and I look forward to next year and maybe some events leading up to it. For now peace out and be safe. By the way I did gorge on some beer and tacos.