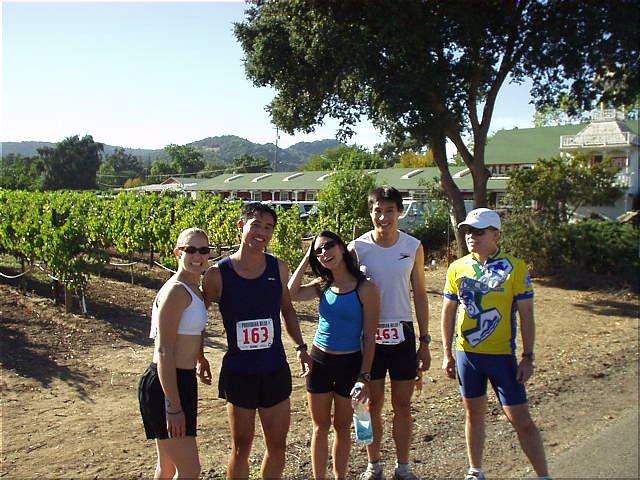 For the second year in a row, I participated in the Providian Relay with the Tri-City Triathlon Club (TC^2). It’s a 200-mile race from Calistoga to Santa Cruz, California.

This year I recruited my friends Heidi and Lisa to do the race with us. Rounding out the rest of the team was Al, Everitt, Herb, Manuel, Mike, Phil, Sharon, Steve, and Tom.

As Felix mentioned TC2 completed its second Providian Relay. I think it is safe to say that a great time was had by all. It really is a unique event. It is about camaraderie, encouragement, team support and having fun together. It is also about putting out 3 close to race effort runs in less than 24 hours with little to no sleep.

For those who don’t know this event is a running relay race consisting of 36 individual legs starting in Calistoga and finishing in Santa Cruz. This is a distance of 199 miles. Each runner runs 3 times totaling somewhere between 13 and 20 miles with legs from 3 and 8.9 miles. As you might expect some legs are harder than others so they are classified as “Easy, Moderate, Hard or Very Hard”. I don’t know how to describe the classifications but I can definitely say that “Easy” does not mean flat. Almost all the “Easy” legs would be more hilly than the WLC loop.

When a runner registers he or she is asked to enter their current 10K race pace. This is needed for a couple of purposes. The first is to help the team captain determine who are the stronger runners and put them on the appropriate legs. The second is for the race organizers to determine the speed of a team as a whole and assign an appropriate start time so that, at least in theory, all the teams arrive in Santa Cruz at roughly the same time.

We started at 12:30PM on Saturday which was pretty much in the middle of all teams, start times varied from 7:00AM to 5:00PM. As a team it took us 27:56:49 to complete the event which is a 8:26 minutes per mile pace average for the 199 miles. It is important to note that every runner ran at least one leg at night and just under half of our miles were in the dark. Our running compadres the “Mission Peak Striders” had two teams entered so we casually tried to figure where we were in relation to them; after all, we have our pride! One of their teams finished 45 minutes ahead of us and the other was 35 minutes behind. We also beat 65% of the teams so it was a solid team effort. Not bad for a group of triathletes!

The weather was excellent, may-be a little too warm Saturday and Sunday afternoons and a little foggy and damp in the Daily City area. For a 24 hour on average, excellent! Even though we are not pure runners I think that our triathlon training really helped us out. One aspect was mental toughness. Nobody caved in on our team; I saw plenty of walkers out there. It could have been lack of preparation on their part but I think it was more mental toughness. Another is endurance. Any runner can do a fast first leg but doing that 3rd one with a body worn down by lack of sleep and two previous race type efforts is quite another thing.

How did I do individually? I was pretty happy. I was able to put together 3 solid efforts with zero sleep. I averaged 8:15 pace for my 19.3 miles so I was slightly ahead of the team average. The truth is the numbers don’t really matter, I gave what I had and had a hell of a good time doing it.

I would like to thank our volunteers, Laura and Peter (wasn’t there a 3rd? yes, there was Phil’s wife Michele. Thanks, Michele! –Felix). I have no idea why they would want to do it but am most grateful that they did. A special thanks has to go out to Janette for organizing this for us for a 2nd time, things ran like clock work once again.