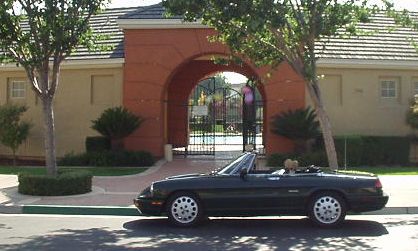 Welcome to the page of my former Foglio Green Italian steed dubbed “Elaina.” She was my daily driver from 2003-2009 until I sold her half a year after purchasing an Audi TT Roadster Quattro.

Her body was styled by Pininfarina, the same Italian design studio that penned many Ferraris.

Her powertrain layout is classic, with a racy overhead-cam engine in front powering a well-controlled live-axle setup in the rear, matched by disc brakes all around.

And yet, her soul is uniquely Alfa: a descendent of a race-bred pedigree imbued with tradition, elegance, and passion; the type that gets one’s pulse beating just a little bit quicker and the mind conjuring up the possibilities…

“Because beauty is not enough” is her automaker’s motto. This is, after all, a romance… A romance named Alfa Romeo.

I named her Elaina after Katherine Ross’ character and Benjamin Braddock’s love interest in The Graduate, the movie that instilled Alfa Romeo into Americans’ consciousness.

Who could ever forget Dustin Hoffman tapping on the glass walls of the church while passionately screaming, “Elaine… Elaine… Elaine!”

These plates mean a few things:

The plates mean, “To see stars” (an allusion to warm summer nights, for wonderful top-down motoring under a clear, sparkling sky… or to see movie stars.) Or, when she is carrying Canny, perhaps the plates could mean “double century stars”? Well, one can pretend!

Elaina has an EPA rating of 30 mpg on the highway. She has gotten a consistent 35 mpg on longer trips.

I drove the Alfa about 10,000 miles through 20 states and provinces in a journey dubbed the Great American Road Trip. The purpose of that trip was to explore nearly three dozen different cities I was considering moving to. Ultimately, she brought me to my current home of Fort Collins, Colorado.

Amazingly, Elaina did not suffer a single breakdown during that nearly three-month adventure!

google'd you & you came out on top