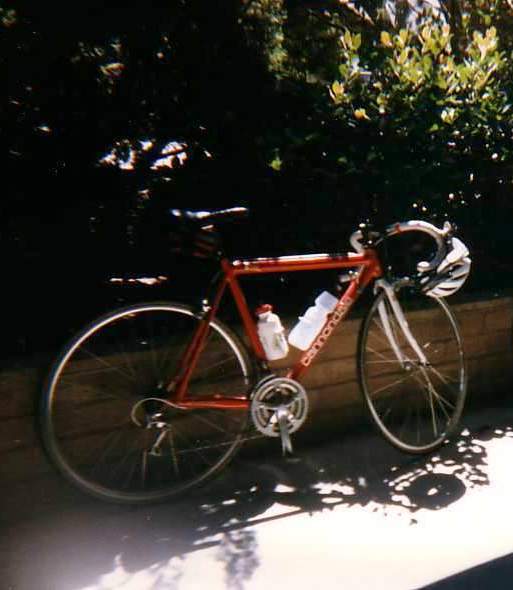 Congrats on the 10 yr. anniversary. I came across your site as I was looking for some info on my newly aquired Cannondale 3.0. I bought it from a bike shop in a college town where a guy crapped it up by spraypainting it to look like a junker to ride on campus. I guess he moved on and traded it in on another bike because it was stripped to the frame. I bought it for 25.00 and proceded to the paint shop where it was blasted and a hot coat of metalic copper paint was applied. The decals will be in and soon and the other components I ordered and it will be on the road by spring. 'The Veteran flies again!' will be its theme. Email me and please tell me what you can about the design and riding. I am glad I am not the only one with such a cool bike. ↩Reply

I enjoyed your site. And great to hear that you are happy with Canny. I hope you still have her beside you. Any how, I was searching information on my bike.

I have a Cannondale 3.0 Criterium (Red and White). I purchased the bike recently and I am enjoying the bike as well. However, I can not find any info on my bike and I was woundering if you would happend to know? I can send you a picture of my bike. It doesnt look like yours but similar. Please let me know.. Thank you.

Congratulation to you and Canny.

I saw a red with white Cannondale this morning in a second hand shop. Its written there 3.0 CRITERIUM and gears and brake sets are Shimano 105. Other than that I don't know anything about the bike including manufacturing year. The cost is about US$200. I'm still thinking of buying it or not. For info, it is not easy to find a used Cannondale bike here in Malaysia. I will send a photo if I got the chance. Please give any comment. Thank you. ↩Reply

I'm racing on a Cannondale 2.0 from 1989! I got it new in '89, but hardly used it until 2004 (it had been my TT bike). So I've been training/racing on it for three years now. In 2005, I moved up to indexed shifting with a used set of Ultegra 8-speed shifters. My team is aghast, seeing me line up at a big race with this late '80's production. Fellow 40+ racers have reported marital problems as their wives find out how cheaply I race! Ooooops! My team is offering me a CAAD 9 frame + carbon fork for $450, and I am tempted, but my heart is still in the ole Blue from yesteryear... Gotta get you a photo... Cheers! - P. ↩Reply

Nice Bike. However, really wondering which seat bag you have attached in many of your photos. Its so hard to find a decent expandable seat bag, especially with such large reflective panels. I'm not familiar with yours and hope that model is still available somewhere. Thanks, bro! ↩Reply

What campy group are you using.I want to up grade my cannondale. ↩Reply

i have blue one and love it,but when is it time to get a new one? ↩Reply

Funny, I think I am riding the same frame Philippe is riding, a Cannondale 2.0 in blue with yellow sponge prints on the frame. It's so retro, has the original Wolber rims on it (now creaking with each revolution in the rear), and weighing in at 23 lbs with the original equipment, a real chore to hillclimb with.

After having a female riding partner admonish me for the last time, I went and bought a used Giant TCR Advanced SL frameset outfitted with Dura Ace 7800 and Ksyerium wheels off eBay. No doubt it's a smooth ride, but I expected the thing to launch fast enough to give me whiplash. Nope!

It will be interesting to do a longer ride with the bike though.

I guess I've always wondered why I never bought a new bike over all these years, now I know! ↩Reply

I've got an '89 SR2000 that my dad bought me as a teenager when I was pretty deep into road racing. She's a hyper-highlight blue, criterium 3.0 frame with Dura-Ace 8 speed and tubulars. Her gearing was definitely set up for racing and is a far cry from today's compact crank setups. She came stock with a 39x53 crank and 12x19 cogset. Not a climbing gear anywhere which was a bear. My knees were teenage knees at that point and I thought I was indestructible.

I had been riding steel prior to that, columbus tubing Bianchis and this bike was way stiffer and much more responsive. The ride however was quite harsh. Got out of competitive biking for a while and then got back into serious mountain biking and my road bikes sat for quite a while. I've since evolved again and have started road riding more.

I upgraded my Cannondale with aero clinchers rims and still get out and hammer her quite a bit. The bike is still very quick and of course still harsh. She weighs in about 20 lbs. so still somewhat respectable. I've not raced her since the early nineties but have done several organized rides and she gets a lot of comments. I've even done RAGRAI on her, she only beats me up because she loves me.

Since she just turned 21 this summer. I occasionally let her drink but only in moderation, she's pretty fond of a strong belgium. Can you tell I still love the ol' girl. ↩Reply

Ooops wording error ...I brought Dale ... thought I would name my bike ..lol to a bike shop in Niantic Ct ...not where they actually built it ,I guess from what I read they are made overseas now .. I love this Road bike !!. Dale will.

be with me for a long time ...along with some other nice rides. I've been on mountain bikes for a while... it is pretty sweet to be on the road. Good story Scot !! I occasionally let her drink. lol... Happy Bithday ol girl.. ↩Reply

Any help would be much appreciated! I'm trying to revive an old 3.0 series canny for my new daily rider and your site has given me alot of info and inspiration! ↩Reply

Hi Alan. The frame height is actually center to a little bit over the top; Cannondale was notorious for measuring it this way with the 3.0s and I just verified that by measuring my own frame. The length of the top tube is 53 cm. The stem that came with my bike was 11cm.

Felix again just wanna thank you for this blog has been the deciding factor on whether to buy a new bike or bring the canny back to life.

I've finally decided on the latter. The frame size matches perfectly to my inseam. As far as I can tell it only needs a tune up and some tlc.

I'm about to order a wheel set and I'm still new to this. Do I need freewheel or what cassette will I need and what's a good inexpensive wheelset to look for.

Thanks again for your help. ↩Reply

Just building up a cad 3 frame but standard 27.2 was too wide even though a website stated all Cannondales have 27.2.So your correct 27 info.is useful.I am over in Berkeley. Stanford looks like nice riding area.Sf is so crowded! ↩Reply

The 270 I listed on the page was actually the weight in grams of the seat post, but I just measured the diameter of the post using digital calipers and it is in fact 27.0 mm. Since I took the seat post from a Cannondale CAD3 and put it on my Cannondale 3.0, I can confidently say your CAD3 frame has a 27.0 mm seat post.

Have a good time cycling in Berkeley! I am going to go for quick ride myself right now. ↩Reply

Hi! Found your blog in a search of 1992 Cannondale 3.0 bikes. Just picked mine up today, from a fellow who bought her new, and has since upgraded to a new Cannondale road bike. I've had my Cannondale MTB for about 20 years, and it is still extremely fast, light and fun. -Tony Bittle, Carbondale, Illinois ↩Reply

I have a 55 1992 cannondale r600 and i was having work done on it with the gears and the bottom tube shifter mount internally piece was cracked and just fell apart. Does anyone know where i can find one and what the size of where the bottom tube mount is at is? Will be a great help because the bike is usuless without it. ↩Reply