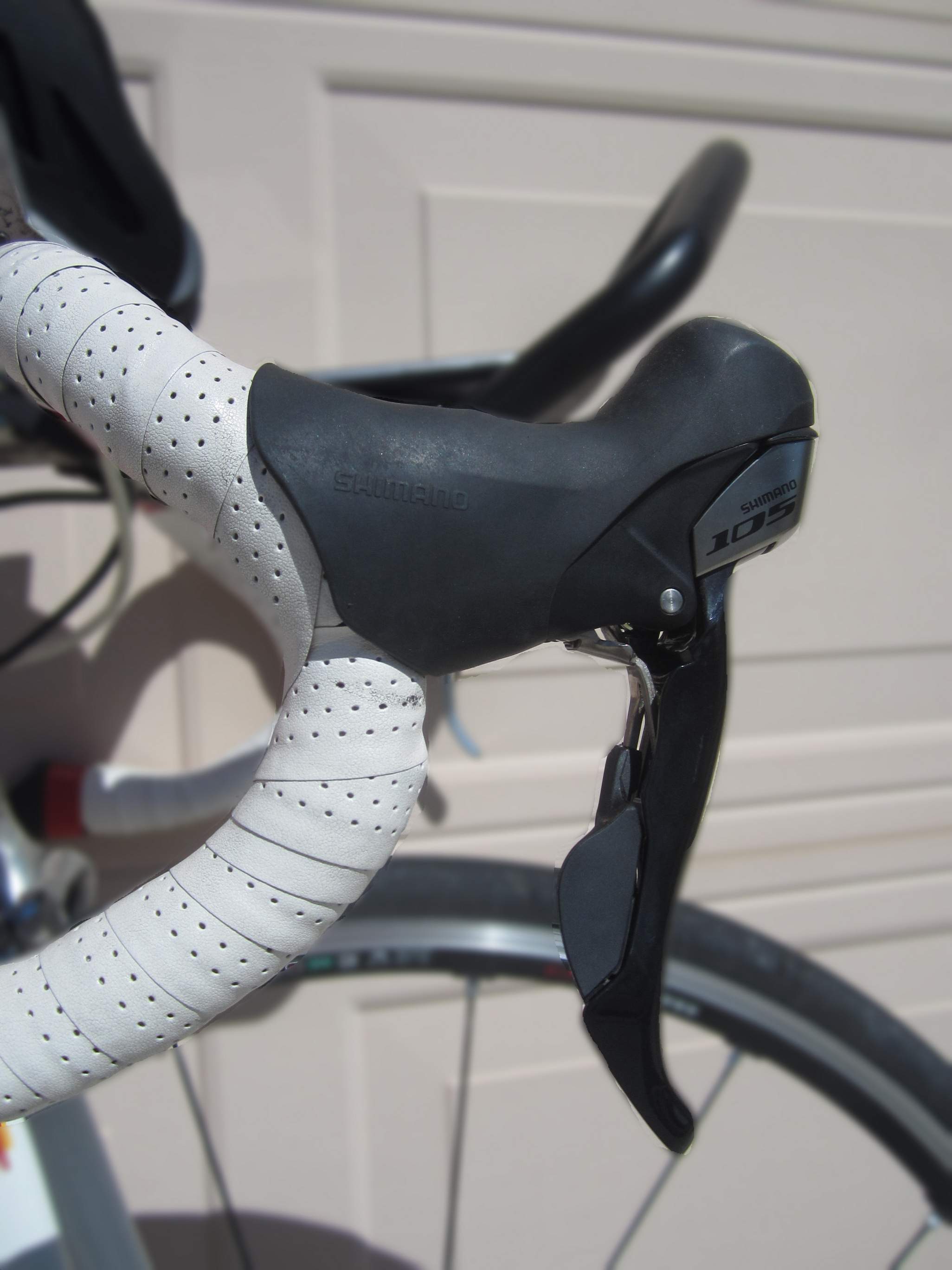 One day a couple months ago, the 1998 Shimano Dura-Ace STI 9-speed shifter that I had retrofitted to the red Cannondale 3.0 road bike started to malfunction. Pushing the big lever inward to downshift started to feel “clickless” and as mushy as oatmeal. Worse, no actual movement of the rear derailleur would occur. I tried to disassemble the notoriously difficult-to-service shifter and brake lever assembly but to no avail. (Never mind that I am a mechanical engineer.) After the hour hand on an analog watch face made two complete revolutions, I decided that this was a good opportunity to replace not only the shifter, but to upgrade the whole drivetrain.

I actually had been preparing for this moment for over a year as a whole dossier of Microsoft Excel spreadsheets can show. The question I had posed was once the 2×9 components wear out, what would I replace them with?

This article explains the possibilities and how I ultimately decided upon upgrading to Shimano 2×10 speed.

For the last seven years, Canny the Cannondale has been outfitted with the following components, as documented in this 2010 article:

I considered the following possibilities:

Evaluation of the Possibilities

Ultimately I chose Option 3 above. Below are the pros and cons of the other possibilities.

Pros: I would have the latest components with an 11-speed cassette. A complete Shimano 105 5800 groupset is not too expensive (around $400).

Cons: The new drivetrain would weight 0.7 lbs. more (see this spreadsheet, selecting the Shimano 105 2×11 tab). I would have to buy a new 11-speed rear wheel since Shimano Ultegra 6700 rear wheels cannot be adapted to 11-speed. (If you have a different wheelset, yours probably could.) Even if I resold the old 10-speed rear wheel, the net replacement cost would be around $175.

Also note that Shimano 11-speed brake/shifter levers pull a different amount of brake cable than previous generations. So you would probably want to get new, matched brake calipers as well to retain good braking performance.

Pros: I would have the latest components with an 11-speed cassette, and SRAM components (even Rival or Force level) would not result in a large weight penalty. SRAM Rival costs only a little bit more than Shimano 105 (latest eBay prices).

Cons: I would have to buy a new 11-speed rear wheel as explained above. I also really dislike SRAM Double-Tap for ultra-endurance cycling events.

Pros: Canny would drop some weight.

Cons: To maintain the Super Bike’s current weight while upgrading it to 2×11, I would have to spend a lot (>$1000) for top-level SRAM or Shimano components for that bike.

Pros: In addition to electronic shifter levers, I could have remote shifters on, say, the aerobars or handlebar tops.

Cons: Expense and wires. Real-world battery life is only 600-700 miles before the battery pack needs to be recharged.

Pros: In addition to electronic shifter levers, I could have remote shifters on, say, the aerobars or handlebar tops. Batteries are easily swappable for the front and rear derailleurs.

Cons: Unproven; who knows what the battery life is and how well the electronics will hold up to the elements. At the time, it was on Kickstarter and hadn’t hit the market yet. In videos, the shifter motors sounded kind of noisy. Significant weight penalty and also would have to mount the rear derailleur module to the right chainstay (ugly).

Pros: No more front derailleur so there would be simplified shifting and no need for trimming. The SRAM road gruppos have narrow-wide chainrings and a clutched rear derailleur, so there should be no chaindrop.

Cons: Expense for the groupset and having to buy a new 11-speed rear wheel. As mentioned above, I also really dislike SRAM Double-Tap for ultra-endurance cycling events.

Pros: No more front derailleur so there would be simplified shifting and no need for trimming.

“One-by” shifting has not caught on with road bikes for OEMs, mainly because you lose either a very top- or bottom-most gear and have bigger jumps between shifts. SRAM is also the only company that has dedicated 1×11 groupsets for road bikes—although as noted above, you could use Shimano components using various cable-pull or derailleur hanger adapters (extenders) made by Wolf Tooth.

For me, 1×11 gear range would not be a problem. For example, the Super Bike’s current 2×10 drivetrain (50/34 compact crank x 11-26 casette), which I consider virtually perfect in terms of range and maintaining cadence between shifts, has the following gear ratios (full spreadsheet):

As you can see, the highest gear for 1×11 is only marginally lower (4.9 gear inches smaller, or a mere 4% difference). This would be inconsequential to me since at the speeds I use that gear in, I’m usually coasting downhill.

The “jumps” between shifts would not be bad at all with 1×11. The table below shows the cadence changes:

As you can see from the table above, the biggest cadence change would result in upshifting from the 28T to 24T cog. In that case, the cadence would drop from 95 RPM to 81.4 RPM, a difference of 13.6 RPM. I do not consider that bad.

Some people say the chainline for 1×11 could be poor and result in increased drivetrain friction and wear. I consider these losses minimal for my type of riding and in fact, even while riding 2x, I do not hesitate to put the chain in extreme crossover positions (e.g., 53×28). This frequently allows me to not have to shift the front derailleur at all during training rides. Essentially, I am riding 1x, but I do have the 39T to provide a whole set of additional “bail-out” gears during long bike rides when my legs are fatigued. Otherwise, around Fort Collins, Colorado, I can climb almost anything in the 53T ring.

Dan Connelly did an excellent analysis on the friction losses caused by 1x and also concluded that they are negligible (fractions of a watt).

Contrary to popular instincts, 1×11 drivetrains for road do not usually result in any weight reduction. The weight savings from not having a front derailleur, small chainring and front shifter are more than offset by having a much heavier wide-range rear cassette and clutched rear derailleur. (For example, a SRAM PG1130 11-36 cassette weighs 419g, or more than double the 205g of a SRAM R9 12-26 9-speed cassette!)

A SRAM 1×11 road groupset would result in a smaller weight penalty, but would still weigh more than a 2×11 system with equivalent gear range.

I ultimately chose to upgrade to Shimano 2×10 from 2×9 for reasons of cost, weight, and reliability.

This upgrade required only the following components:

I was able to use the same front derailleur, crankset, and even rear derailleur. (People upgrading from 2×8 to 2×10 could do the same.)

The weight penalty would have been less if I got a Shimano Ultegra 6700 or Dura-Ace 7800 shift/brake lever instead, but at higher cost. The inner shift lever also would have been made of more premium-looking aluminum instead of plastic. Otherwise, there is no performance or durability difference between the component tiers.

Upgrading to the later-generation Shimano 10-speed (e.g., 105 5700, Ultegra 6700, or Dura-Ace 7800) “brifters” also resulted in better aesthetics and aerodynamics from not having an exposed shifter cable. (See how it was before.)

I picked up the slightly used 10-speed cassette at the Fort Collins Bike Co-op. Otherwise, it would have cost around $33.

For the first time since running 3×7 on the Cannondale (what she came with in 1993), I do not have to over-shift the rear derailleur for any gear. (Even with Dura-Ace 9-speed, I had to overshift slightly to downshift the chain from the 14-tooth to the 15-tooth cog.) It never “misses” a gear change.

Shifting is extremely quiet and smooth, especially for the smallest cogs. Sometimes the chain movement is so silent and unjerky that I am unsure if the shift actually occurred, but then I look back and it did! (Nowadays I just go by faith that the shift occurred since it has been so reliable.)

The 53×28 gear combo is low enough that during the first century ride, I did not shift the front derailleur even once. I have the derailleurs and cables dialed to the point that minimal trimming is needed (and the downtube lever for the front derailleur provides infinite trim possibilities). There is usually only some front derailleur rub when I shift to the 28T cog, and I actually welcome it as it audibly tells me I have no more larger cogs to shift to.

Essentially, most of the time I am using only “one-by” (1×10), but I do have that second, smaller chainring for special circumstances where having the extra set of bail-out gears is a boon.

When I first bought Canny, she had 3×7 Shimano RX100 components. It’s remarkable that 24 years later, she has only one less gear combination despite having a double crank instead of a heavy triple. It’s also kind of amazing that weight- and performance-wise, the bike is still comparable with most 2017 bicycles under $1500 (whose weights are usually published without pedals).

Over the decades I have tried Campagnolo Ergopower, SRAM DoubleTap, and Shimano STI shift/brake levers, and I definitely prefer Shimano’s. They work best with cold and numb hands and have the lightest action for downshifting.

*Add 1.3 lbs. for the the Profile aerobars I usually use.
**Weight gain based off comparison to her components during April 2014-March 2017.
***I switched to these pedals from Speedplay X/3 in 2015 for walkability.

I found a left-hand Shimano 5700 STI brake/shift lever that matched the right-hand one on eBay. Since it was was broken, I got was able to buy it on auction for $11. I wanted to retain the downtube shift lever for the front derailleur anyhow, so it didn’t matter that the shifting mechanism was broken.

In fact, I completely gutted the shift mechanism, saving 74 grams from stock for a final weight of 160 grams.

That compares to the 122 grams of the Shimano 105 brake lever that it replaced, for a gain of 44 grams.

However, I also cutting off some unneeded aluminum bits from the flip-up arms of the original Profile Airstryke aerobars at the same time. This saved 36 grams.