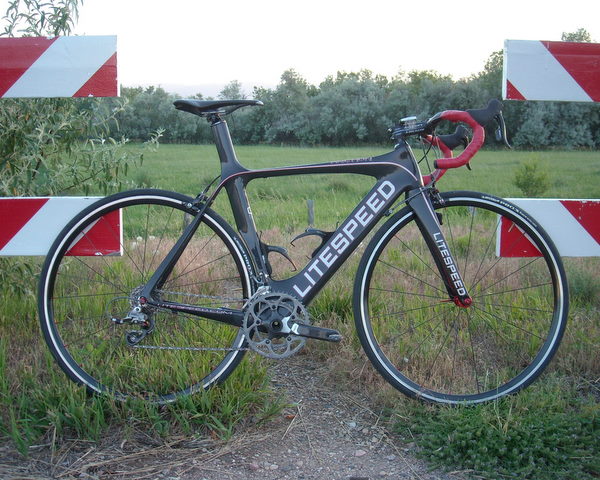 Considering my passion for cycling, it may surprise you that I didn’t have a single two-wheeled non-motorized vehicle that was designed and built in the 21st century. Until this year. I actually skipped a whole decade (the 2000s) and, in late 2010, purchased a heavily discounted Litespeed Archon C2 frame. It would become the basis for my Super Bike.

Litespeed is famous for their legendary titanium frames, but aside from a brief foray into using carbon fiber between 2002-2006, never used the black magic material until their 2010 Archon C1, C2, and C3 range. After years of development and leveraging some carbon fiber and aerodynamic know-how from its sister company Quintana Roo (a triathlon bicycle maker), Litespeed came out with a unique product that not only is sexy in its lines, but boasts a number of features that distinguish it from other carbon fiber bikes coming out from Taiwan.

Below is a list of modern day features the Archon incorporates (some are proprietary, where noted). In the column next to them are what my Cannondale 3.0 features in order to compare and contrast some of the advances in bicycle technology made between 1992 and 2010.

As you can see, about the only things the 2010 Litespeed Archon C2 and 1992 Cannondale 3.0 have in common are 1) the basic double-diamond frame shape and 2) having replaceable, aluminum rear derailleur hangers (which I think was another Cannondale innovation back in the 80s).

To complete the Super Bike, I mounted SRAM components (mostly Force) and other lightweight goodies as listed in the table farther below.

Despite having an aerodynamic frameset, the Super Bike currently weighs only 15.0 lbs. with pedals, compared to the Cannondale’s 19.0 lbs. That’s a four pound difference, and for the future I still have a couple tricks up my sleeve to drop the Super Bike’s weight below 15 (which would even make it UCI “illegal”)!

I cherry picked all of the components, all from online vendors (particularly eBay). Huge dollar savings came from Real Cyclist, which at the time seemed to be one of Litespeed’s preferred blow-out distributors.

*all weights are actual weights confirmed with digital scales

After I first put together the Litespeed and rode it, I couldn’t immediately tell if it was any faster than my Cannondale—a little surprising considering the above technological “advances” listed above and a weight of several pounds less. And though the ride felt different, I wasn’t even sure if it felt any more comfortable.

But after riding the Super Bike in 300km, 400km, and 600km brevets in Colorado, I am a believer in its weight, stiffness, and comfort advantages. After the end of those rides, I felt more fresh than I ever remembered being on the Cannondale, and my times for those distances were superior as well.

Regarding the supposed aerodynamic advantage, however, I cannot confirm it either by subjective feel or objective numbers. Litespeed claims a 20-watt savings at 30mph at various yaw angles versus a conventional bicycle, but in unscientific coast-down tests, I actually think the Cannondale goes faster. (For example, going down the north Horsetooth Dam in Fort Collins, I routinely can exceed 50 mph on the Cannondale, whereas the one time I went down it on the Litespeed I only hit 46 mph.) Whether this is because of weight—particularly the C’dale’s significantly heavier wheels—or because the Cannondale has less frontal area due to a smaller-diameter headtube and handlebars, is up for speculation.

Her Most Epic Rides

Then in June 2015, we did the 4,233-mile Trans Am Bike Race. Despite getting Shermer’s Neck, I finished in 8th place. The race was too much for my body but not too much for the bike!

I’ve named all my wheeled machines, and thought of names like Litey and Speedy. But the name that stuck over years was simply “the Super Bike.”

Felix, you should call it Cherry! (Since you cherry picked it. Just a suggestion.)

How many hours did you spend on gathering the parts and building the bike?

It has been taking me tons of time and still under construction. I am too embarrassed to tell at the moment! ↩Reply

Thanks Ken! I like your name suggestion and may adopt it.

It took me almost six months to procure all the parts. I assembled everything in about a day (maybe 7-8 hours). ↩Reply

Did you buy any groupset on ebay? ↩Reply

Nope, I did not buy any gruppo on eBay. I've only purchased individual parts. ↩Reply

I saw a picture of the Super Bike in a Facebook post, but I didn't realize that this was your new bike. Looks fast! I'm still poking along on my 1995 (!) Trek 5200. The solid tires are still in use. No flats, but still slow as ever. One day, I'll upgrade my bike - have you thought about installing disk brakes on the Super Bike? ↩Reply

Hey Felix, nice bike. Mine is also the 2010 C2, they only made the C2 for one year. I have dura ace 7800 front and read derailuers, and Ultegra 6600 brakes and shifter. Handlebar/Stem is Zipp CF, and a Fizik seat. Wheels are Ksyriums. I love my bike and happy to see someone else that does as well. I'm mostly commuter and recreational, with about 10K miles on it so far. Still solid, very strong. ↩Reply

Thanks for the article. I am building a C2 with tiagara shifters and 105 groupset 2x10 ↩Reply

Thanks for the note and good luck with the build! ↩Reply

Thanks. This has been a great resource. Do you still ride her. I also have a polished Litespeed Vortex with a 2x11 groupset ↩Reply

Hi Ron. I do still ride her and have a couple of big (hilly and long) rides for her planned this year. I bet your LItespeed Vortex is sweet. I've always admired Litespeed's titanium frames; maybe more so than even before due to titanium's durability. ↩Reply

Hi Felix! I just recently picked up a used Litespeed Archon C2. Do you know what's the widest tires this bike will accept? ↩Reply