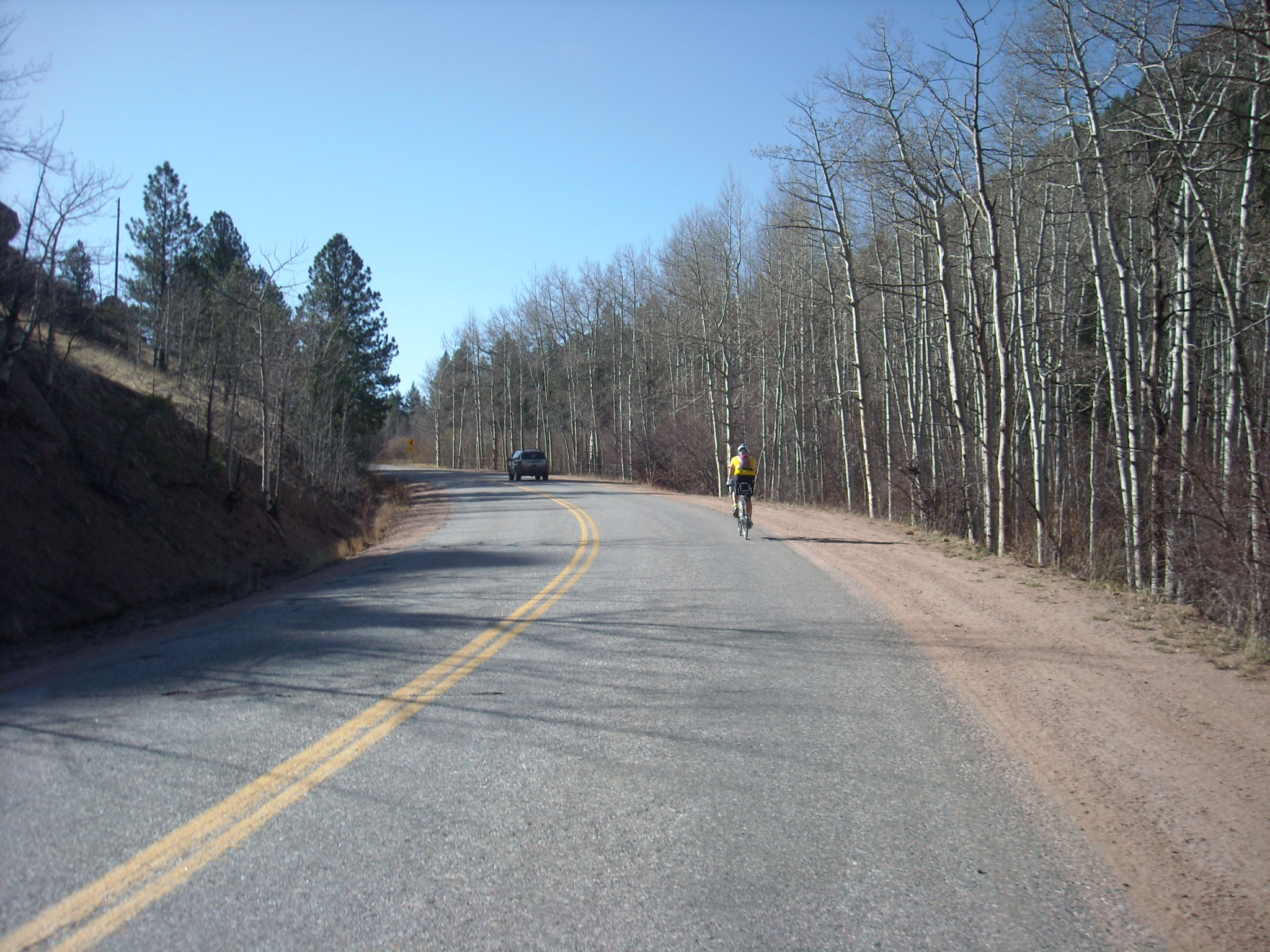 “Don’t freeze and never go anaerobic.” These were a couple of valuable lessons I took from my last brevet, in which I ended up finishing looking like Ronald McDonald’s long-lost brother (due to having to beg for clothes) and feeling like my body had been beaten to a pulp by Mile 100.

Turns out they were good lessons to learn in time for this event which had the deceptively nondescript and innocent-sounding name of the Cripple Creek 300km Brevet. It would have been more appropriate if it was entitled the Hillfest Brevet or the Heart Attack 300. Or maybe the Ride of the Crippled Freaks.

My two new rules were half taken care of by a weather god who must have took pity on us for all the suffering caused by the cold, wind and snow in the last brevet. Today the high temperature was 80 degrees and were it not for the still-cold Colorado mornings, I would have felt silly for bringing a jacket. As it turned out, the jacket was useful for precisely two hours before the sun came out of sleep.

Never mind that my new rules did not include “don’t try out new equipment for the first time in a major athletic event.” E.g., in order to carry the said jacket, I brought a lightweight stuff pack that I could wear like a mini backpack on my shoulders. In addition, I was going to ride a newly cobbled-together bicycle dubbed the Super Bike that I had not ridden for more than 10 miles total.

Trying these things for the first time on a bicycle ride of nearly 200 miles could have easily resulted in disaster, but at least the bicycle worked brilliantly. More on this later in a different post.

Regarding rule #2—“never go anaerobic”—this turned out to be good advice considering what the terrain would end up throwing at us. Having less confidence in my endurance after the previous brevet’s fiasco, I took it easy from the get-go. And so by the first checkpoint at Mile 48—after we had already climbed over 4000 feet and the air was thinner than a bulimic movie star—I was still feeling fresh and was raving about how “that was so nice!” and how gorgeous the scenery was.

Another rider—a friendly guy named Hal—had other thoughts on his mind. “I didn’t think there would be this much climbing,” he sighed. I tried assuring him that this was the longest climbing stretch but neglected to tell him we still had, oh, 10,000 feet of climbing to go.

Miles 50-100 were predominantly downhill—a nice result of the first 50 miles being almost all uphill. So there were no complaints from my legs and I was able to fully enjoy the views of the snow-capped rockies towering over the cute little town of Cripple Creek, the numerous rows of aspens before Woodland Park, and—virtually everywhere—dense forests of evergreen with the occasional cabin peeking out from within.

Unlike in the first century of the ride, at no point did we go above 8,300 feet in the second half. But there were still many significant ascents remaining, as you can see from this elevation chart that resembles an electrocardiogram:

The climbs were never super steep but I was becoming very thankful for having a 34×26 low gear on the Super Bike. I was using it a lot.

My legs felt good enough that I was not eliciting any wimpers through Westcreek or Deckers. But past Deckers—the climbing was quickly becoming tedious. Especially because I made the possibly strategic mistake of not quickly stopping off at the store in Deckers to top off my water bottles; that the sun was out in its full glory creating 80-degree temperatures; and I was having to sip Gatorade every five minutes before deciding to start rationing around Buffalo Creek, about 10 miles from the next checkpoint in Pine Junction.

The Buffalo Creek-Pine Junction climb was a 1,700-foot doosie. While not cracking, mentally I was becoming exasperated in direct proportion to my body’s increasing level of thirstiness. At one point—when it was clear that the climbing would not relent until the Pine Junction checkpoint, I cried out loudly: “Aw, COME ON.”

“Yeah, this is a crazy ride, I know,” came a voice from another rider behind me. Apparently I was no longer alone. I was thankful that the state of affairs hadn’t become so bad that I had degenerated into more of a potty mouth and what I yelled out was reasonably tame.

But my surprise at having been caught (briefly) from behind unconsciously motivated me to pick up the pace a little. Enough that by the time I finally got to Pine Junction, I exclaimed, “Man am I glad to get here. I was parched!”

There were several cyclists at the Pine Junction General Store that until that point were ahead of me. Everyone looked dejected. Some were lying on pavement shaded by a roof while others sat glumly in chairs. But at least all managed to keep their sense of humor.

“Vern,” a rider said to the ride organizer who had devised the route, “Someone is going to complain to the route setter.”

“I am going to complain to the route setter,” Vernon replied. Laughs abound.

People were getting out of their chairs or off the ground so slowly that I was actually the first one to roll out of the checkpoint despite arriving later. Seventy miles to go.

Five of us started the Pine Junction to Buffalo Creek descent together, but then came the climbs again. The group became fragmented and one by one, folks were dropping back. Still having some reserves in my legs from taking the first half easy, I motored on. I was eager to finish this up before dusk.

The last few hours, then, I was riding alone but my spirits were buoyed when arriving at the second-to-last checkpoint—a Safeway gas station—in Woodland Park. “Almost done,” I said to the cashier. “Just 18 miles to go. I hope it’s all downhill.”

It was. Well, almost. Thirteen miles were on Highway 24, which could have felt unnerving with all the cars on the road but the speed differential between them and myself actually wasn’t that great. Crouching into a full tuck, I tried to exploit the supposed aerodynamic benefits of the Super Bike’s frame that was designed in a wind tunnel. At 30-45 mph, the Highway 24 stretch was over seemingly quicker than you can say “Colorado Springs.”

The final five miles included a road adjacent to the Garden of the Gods that had little-to-no-shoulder and was gradually uphill. By this time I was in virtual time trial mode, so when I rolled into Marriot’s—the brevet’s beginning and end—my legs were spent.

I had finally gone anaerobic. At least I never froze.

that sounds like a fantastic ride!!! you are doing some long rides, you are in great shape...i'll be out of town until 5/16, let me know if you want to go for a ride sometime after that...

keep up the hard work...

This was a great route, but the traffic was scary. It had the rudest drivers I've encountered since I did an SR series in TX this spring. I was nearly run off the road twice on the descent from Cripple Creek; once by a double-long fuel truck, and once by a tour bus. ↩ Reply