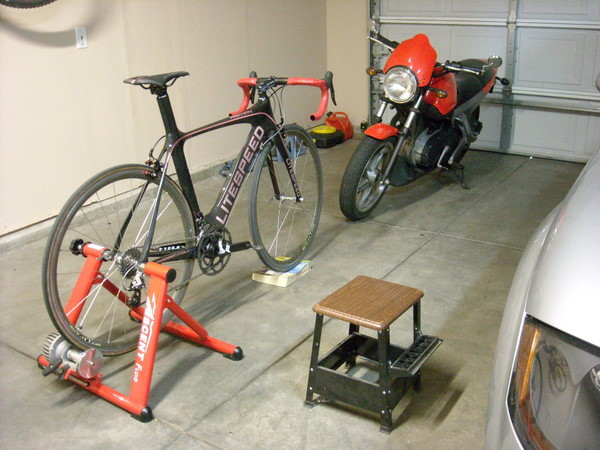 “You can’t buy fitness, but you can buy advantage” is an amusing quote I read in someone’s signature in the Weight Weenies cycling forum. And so after riding my faithful Cannondale exclusively for 18 years in road races and triathlons, I finally have a bicycle that was made in the 2000s. You could say my equipment has finally followed my passion for cycling into the 21st century.

It actually took me over half a year to procure parts and build this—a consequence of wanting to “engineer the spec sheet” and building within a budget. The latter was actually not due to a lack of funds but because there just seemed to be something wrong about spending more on a bicycle than, say, an almost-new motorcycle with just 1764 miles on the odometer. Alas, the ultimate dollar outlay on this project did exceed the cost of the Buell by a little bit, and in truth, if you factored in all the hours I spent researching and cherry picking the parts and putting everything together, we are talking about a small fortune here.

In hindsight, if my own time wasn’t free (something I have long concluded it is not!), purchasing an an already built-up bicycle from a local bike shop, Craigslist or even directly from an online vendor would have made more economic sense. Probably would not have been as much fun, though.

A quick summary of the bike: Litespeed Archon C2 carbon-fiber aero road frame with BB30, tapered headtube and integrated seat post; SRAM drivetrain; ultralight Taiwanese brakes that work amazingly well; and some other standard parts. Right now using my 1997 Mavic CXP-30 wheelset, the total weight is 16.4 lbs. In a few weeks, after a few tweaks and the arrival of a new wheelset on my doorstep from China, she should tip closer to 14.7 15.0 lbs. on the digital scale.

Anyhow, you are probably wondering how does it ride. Specifically, is the Litespeed Archon C2 faster than my trusty C’dale?

At this point I can’t really say, because I have only taken it around the neighborhood on three test rides for debugging purposes. The first ride was on an extremely windy and time-constrained evening, where I only rode two miles.

A week later (after my legs were functional again after the Colorado Marathon), I took a short work break, but only rode six miles. During that distance my left crankarm loosened and started ticking back and forth like a grandfather clock while I was pedaling, so I couldn’t really “crank” away much.

The last ride was an easy spin around the neighborhood at midnight with lights and all, just to confirm the shifting and braking was dialed in after I had torqued down all the essential bolts to the proper torque specs. I was going slow but the bike seemed fast?

Well, I will have a much better idea tomorrow when I am riding the Litespeed in the Colorado Springs 300km brevet. It’s probably not optimal to have your “real” inaugural ride on a brand new bicycle be 192 198 miles, but I guess that’s how I roll. Along with the Super Bike. Full report coming Sunday!

Felix, do you tune up, over haul your own bike too? What book do you read to learn all of that skills? I have a bike mentor here, and we are finishing repairing my kestrel 200sci. I am building my mountain bike for the tour divide as well to follow your foot step! ↩Reply