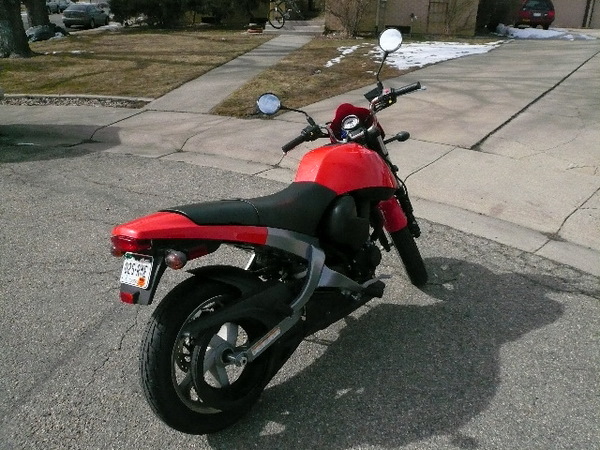 At last, the replacement for my 1969 MGB is here. It’s red, modern, and has two less wheels. And it’s a blast.

Make that a 2003 Buell Blast. What’s a Buell, you ask? It’s Harley-Davidson’s sport bike division, founded by the legendary Erik Buell. Mr. Buell was a University of Pittsburgh-educated engineer for Harley-Davidson in the early 80s and was a pioneer in modern race bike technology, responsible for innovations such as full fairings and engines that were fully stressed members of the motorcycle frame.

He also helped usher an era of modern-day “naked” sport bikes in the late 90s—sporting motorcycles devoid of pricey, superfluous bodywork to reduce weight, ease maintenance and show off the engine. The Blast, weighing in at just 360 pounds, fits that genre.

That the Buell handles really well, has a relatively small engine, and provides lots of open-air thrills help it be the spiritual successor of my MGB quite nicely. Yet, there are some marked differences, as you’d expect in any car-to-motorcycle comparison:

My particular Buell was completely stock, except the first owner had stripped off the yellow decals (the motorcycle looks cleaner this way as you can see from the photos). The battery is new, too.

As I write this, it has just 1764 miles on it. That’s about as close to brand new one can get for a “used” vehicle. Heck, every one of my bicycles has more miles than that.

Speaking of its history, the story goes like this. The motorcycle was first purchased by a woman in Kansas, whose parents owned the dealership it was purchased and serviced at. She rode it only 66 miles before selling it to her friend Beth, the second and last owner of the bike.

Beth—now an engineer in Boulder for Lockheed Martin/NASA—worked at a Harley dealership, so the Buell was well-serviced. She only dropped it once, resulting in a trivial scratch to the rear of the black, right-hand, plastic mirror. She rode the bike while in college in Kansas City on a regular basis, and also would ride with her dad (who has a Harley) and some Harley guys on occasion.

She kept the bike in such good shape that it won first place in a motorcycle show among Harley dudes. She was selling the bike due to changing life circumstances (e.g., moving and traveling a lot for her job and getting married in June). She also might be interested in getting a bigger bike in the future.

I hope to similarly take good care of the bike during the time I have it (1-4 years? I still have the bike in 2017, 9 years after I wrote this post!), and of course, not get into any accidents.

One more matter is what to call it (keeping in my tradition of naming my machines). From the name “Buell” and to differentiate it from my buddy Bue (Adrian & Evelyn’s “boy” that I have dog-sat), it’ll be called “Boo.”

Fortunately, spring is well on its way with plenty of opportunities to get in some more ride time, which I’ll take nice and slow for the next couple months. Boo might not be quite as crazy-fast as some of the 600-1000cc crotch rockets out there, but it’s still one of the quickest vehicles that’s ever graced my garage—a few milliseconds slower than the former Porsche 944 Turbo from 0-60 mph, but on par with the BMW Z3. That should be quick enough for just about any situation.

I swapped out the handlebars for a more aggressive riding position in September 2009. They—and the chrome bar-end mirrors I installed at the same time—are sweet.

Wish I had installed these before my Colorado-Oklahoma motorcycle trip, as enjoyable as that trip was even with the stock handlebars and mirrors.

I still have the Buell! Here she is on a beautiful fall day in October 2015. This was the first time I rode her since May, since I had numb hands from the Trans Am Bike Race and then I lived part-time in St. Louis.

In the picture, you can sort of see the much longer lasting Pirellis that I installed in 2012. Along with the handlebar and bar-end mirror swap described above, I highly recommend this tire upgrade for the Blast as there is literally no downside.

I've always been a fan of the Blast. What do you think about the ergonomics (and if you don't mind me asking, how tall are you)? ↩Reply

I think the ergonomics of the Blast are great. I put on lower Superbike handlebars but probably most people would prefer the more upright stock handlebars. The regular seat (as opposed to low seat) seems to be the perfect height for me and I can flat-foot the ground while sitting..

We're pretty much the same size. I'll have to finally throw a leg over one. thanks! ↩Reply