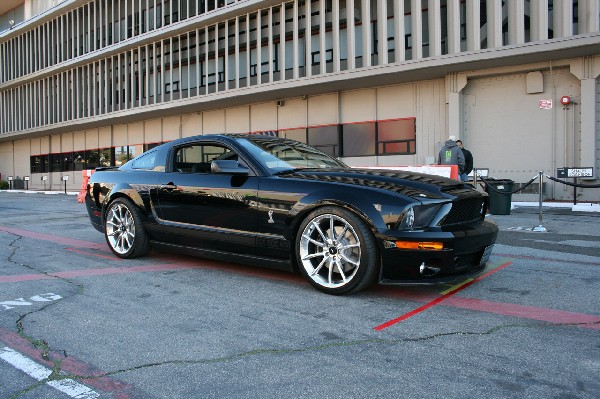 I have to admit, when I was kid, one of my favorite television shows aside from The A-Team and The Fall Guy was Knight Rider. It only ran for four years (from 1982-1986), but reruns remained popular long after that—something I was reminded of in 2003 when I watched a French-dubbed version in Paris (where the show was called K-2000).

Therefore, when I heard a new made-for-TV Knight Rider movie was coming out, I was pretty excited. Tonight it will be shown on NBC (8:00 p.m. MST).

Never mind that the original show was spawned from a rather laughable concept, as explained by the Knight Rider FAQ:

Brandon Tartikoff, youthful head of programming at NBC, and one of his assistants were discussing the problems of casting handsome leading men in the series, because many of them can’t act. Why not have a series, he mused, called “The Man of Six words,” which would begin with the guy getting out of a woman’s bed and saying “Thank You.” Then he would chase down some villains and say “Freeze!” Finally the grateful almost-victims would thank him, and he would murmur, “You’re welcome.” End of show. In between, the car could do the talking.

The show became a pop culture phenomenon, not so much because of the Baywatch-turned-singer dude (David Hasselhoff), but because of KITT, the talking car. KITT may have been based off what was in fact a really shoddily made American car—the 1982 Pontiac Trans Am—but was heavily modified with features such as “Turbo Boost” (which somehow could make it leap over semis) and, later, “Super Pursuit Mode” (which could propel it to 300 mph).

KITT was super cool and easily one of the best-looking cars from an otherwise miserable decade of automobiles. Not only did it become something of a national icon, but was largely responsible for the LED video-game-like dashboards and idiotic “The Door is Ajar” recordings that would later become en vogue (fortunately not for long) in cars in the mid-80s.

The big question for the 2008 version of Knight Rider, then, was what car would KITT be based on? After all, Pontiac stopped manufacturing the Trans Am in 2002, and probably won’t sell a car adorning screaming chicken decals until 2010 or 2011 maybe never.

So the producers of Knight Rider went with another American pony car instead—a Shelby Mustang GT550KR. Yes, a Ford for crying out loud!

Well, I suppose it could be worse. The producers could have gone with the awfully bland-but-powerful Pontiac GTO instead. Actually, I’m really surprised they did not, considering that it would have made sense to stick with a V8 Pontiac. I guess they didn’t because General Motors stopped selling that car in 2006… or because the latest GTO was actually Australian.

What I would have loved to have seen was a KITT based off the Pontiac Solstice. Maybe the producers needed something larger than a 2-seater, plus the Solstice probably looks a little too cute and not brawny enough to be a KITT.

Actually, the more I think about it, a Mustang is a good choice—it looks and sounds great, is fast, and like KITT is a bona fide American icon.

Baywatch Hasselhoff won’t be starring in this movie, although he does have a cameo role. On the other hand, Deanna Russo will be in the TV flick playing a Stanford doctoral student.

Hmmm, with a new KITT and a Stanford girl, the new Knight Rider at least seems promising. I’ll reserve judgment until I see the show though.

Until then, you can enjoy this classic clip of the original Knight Rider below: KITT vs. CARR. The episode seems pretty corny now (David Hasselhoff: “You are never going to be free until you defeat us!”), but heck, this was “good stuff” in the 80s.

Update Feb. 17’08 10:10 p.m.: Ok, I finished watching the new Knight Rider, and dare I say it was entertaining. At the very least, it was nostalgic for me. This was partly because of the Knight Rider theme song (which was cool), but also because the first 10-15 minutes were at Stanford (which is not illogical considering it has been the undisputed leader in autonomous vehicle technology for the last few years). The opening scene was an overhead shot of the campus, followed by dorm scenes with lots of “Go Cardinal” banners. Then the front of Meyer Library was shown for a whole minute, which was memorable for me since that is one place I spent way too much time in!

Regarding the rest of the movie, while certainly not Emmy award-winning by any means, I’d say the acting was a notch better than the original (which is not saying much). And never mind that KITT (voiced by Val Kilmer) sounded just like Batman, that every vehicle in the movie except for the bad guy’s GMC Denali at the end was a Ford, that almost every commercial was for a Ford, and David Hasselhoff in his cameo seemed more like a parody of his old self than anything else. KITT was still as witty as ever, and the Shelby GT550KR Mustang and Deanna Russo were definitely hot, so all in all, I enjoyed the movie.

Verdict: If NBC brings Knight Rider back as a series in the fall like is strongly hinted, I would probably watch. Especially if there are any more Stanford scenes!

Good review man, very good. And thanks for the comment on my site. Now you have a pleasant day sir. ↩ Reply

Although, I have to say, it is endearing that the man is able to make fun of himself! ↩ Reply

I wonder how much money Stanford charged to film on location. In the past, they've been very picky about outside film crews and studios. There was a flashback scene in Chuck supposedly set in Stanford; it didn't look anything like Stanford. ↩ Reply

Hmmm, after re-watching the opening clips, I'm not sure how much of the scenes that were supposed to take place at Stanford were actually there. Clearly, the overhead shots were, but some of the Meyer library footage was taken at a different university. The stairs give it away. ↩ Reply