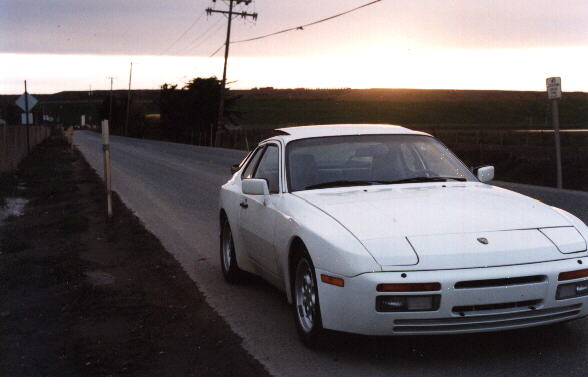 This page is about Portia, the ’86 944 Turbo I owned in 1999. As a voluptuous, flared-fendered speed demon that could sprint from 0-60 in 6.1 seconds, she was my long-distance, inclement-weather road rocket. She was also supposed to be my autocrosser during 1999, but ultra-cycling events and travels ended up gobbling all of my spare time instead.

I ended up selling the car a year later to an enthusiast who shipped her off to the sunshine of Hawaii. She was a surprisingly practical car. Just don’t expect to fit more than two people at once for more than 20 minutes; that “back seat” was a joke.

How Portia Got Her Name

Well, for lack of a better name at the time, I gave my Turbo the temporary nickname of “Porsha”, which of course is merely the German pronunciation of “Porsche”. But then one day my friend Esther asked, “And why not Portia for your Porsche? Isn’t it the name of a woman in a Shakespearean play? Right now the play name eludes me although the plot doesn’t….it’s the one we read in Shake/Lit about the Jew who wanted to exact a revenge…you know which one I mean?”

I responded, “No, I don’t, as I don’t think I read the Cliff Notes for that play.” Also, I didn’t initially like the name because it looked disturbingly like “portly.” However, I was intrigued.

Then a few days later, my friend Trang made the exact same suggestion as Esther. Being an English major in college, she even wrote a spiel on the significance of this “Portia” character, reprinted below.

“Anyways, the name Portia is from the Merchant of Venice (Shakespeare)…She saved Antonio from Shylock. Antonio borrowed money from Shylock and Shylock wanted a pound of flesh as collateral. Meanwhile, Bassanio wants to marry Portia (who is this gal with a wealthy background) and he undergoes a test: he must choose one of three chests (one of gold, silver, and lead)…Well, he chooses the right one and they are about to get married. Bassanio receives a letter that Antonio is in trouble. He takes off to save him and can do nothing about it. Portia dresses up as a lawyer (because in those days women were considered inadequate for the job).

“Portia recites the famous Mercy speech: “The quality of mercy is not strained; it droppeth like the gentle rain from heaven, it is twice blessed…blah…blah…blah…I don’t remember it all. Anyways, Shylock refuses to let Antonio go, because he hates Antonio, and Portia reminds him that even though he has all rights to receive his pound of flesh, he must not draw one drop of blood from Antonio, or he will lose all of his wealth and lands…

Anyhow, so the name stuck (thanks Esther and Trang). I figure, if the name’s good enough for Shakespeare, it’s good enough for me. Although, don’t worry, I do NOT have any plans on naming one of my future cars as “Hamlet…”

Not the Easiest Car to Work On

I remember trying to change the oil on the car. The drainplug was situated along the centerline of the car, so jacking up the car and crawling underneath was a must. Then to remove the filter, I needed an eight-inch-long ratchet extension, and while using the ratchet with my right hand, I had to use my left hand to “flex” a metal sheetmetal flange out of the way. It definitely was not the easiest job, especially compared to my MGB.

I was able to do a few other things on the car before selling it. Here’s a photo from installing a missing anti-sway bar bushing.