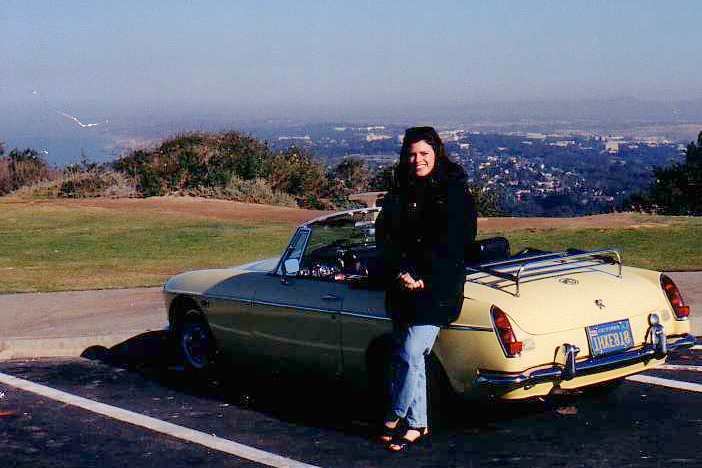 On a particularly icy/snowy day in San Jose, the rear end of my car slid out, and upon hitting the brakes—a no-no in a skid—I went careening into a wall. First the front right end of the car smacked the wall and bounced out, and then the rear end kissed it. Fortunately, the car was only my ’86 Porsche, and not the MG. (The Porsche has since been repaired.)

The problem, however, was that the day after this had happened, I was to see a close friend down in San Diego. This friend was not someone I get to see very often, as she normally lives in Florida. Because San Diego was approximately 500 miles away from my Fremont home, the initial plan was to drive the Porsche.

“It’s too far, it’s too cold, and the trip will be too rushed,” I thought, “so I’ll give Goldie a well-deserved breather.” But after the wall-banger, which relegated the Porsche to the body shop, I had no choice: Goldie would have all the Christmas transportation duties, including this drive down to sunny San Diego.

Here I describe what it can be like to drive an MG on an 1100-mile journey.

The trip, already abbreviated due to a funeral the day before Christmas was now even more rushed, as I had to drop off the Porsche at a body shop the morning before I left. Preparation of the MGB for the trip, then, was woefully lacking—no tune-up, no stocking up on spare emergency parts, not even the basic checks of coolant levels and tire pressure.

Ominously, I even forgot to bring my large tool chest, and hence only had a small box of “emergency tools” in the boot. I did, however, have the sense to bring half a box of Castrol 20W-50, or roughly 7 quarts of oil, which proved to be judicious, due to an oil leak I would only fix later.

The weather conditions were also less than ideal. It was freezing outside and it snowed in downtown San Jose for the first time in over a decade.

“At least it’s not raining outside,” I thought. But I definitely had to put on the MGB’s canvas roof. I wondered just how warm I was going to be able to stay with the car’s one-speed heater that provided warm air with the gusto of a mouse blowing throw a straw. I packed a plaid blanket just in case.

I was merging onto Interstate 680 when I realized that Goldie was lacking in power. Acceleration to normal highway speeds was poor. At least she could maintain cruising speeds of 70 mph, so I didn’t think too much of it at the time. Instead, I just threw in a Deana Carter album in my portable CD player and listened to that for miles and miles.

This regimen was only interrupted by stopping off at a gas station every 100 miles to add a quart of oil, top up with gas, or fill my stomach up with food and drink. Or to throw in a Garth Brooks or Shania Twain album in the CD player. For some reason, this Christmas I felt like driving the miles away along to country music. Sang Shania: “If you’re not… in it… for love”, to which I added in my mind, “…for love of an adventure, for love of an inviting, open road… don’t even bother to do something as crazy as driving a 30- year-old British car 500 miles down California in a single day or so.”

The drive from Merced to Bakersfield was particularly chilly. Even with the top up, the artic wind was blasting my ear through the gap between the top and the left window. At one point, I had my plaid blanket on top of my head, just to keep my ears warm. But I needed the blanket to keep the legs and torso warm, so eventually I unzipped the rain hood from my jacket and wore it around my head. Imagine wearing a rain hood inside a car when it’s not even raining.

The rest of the drive down to San Diego was relatively uneventful until 75 miles north of Los Angeles. Here was a mountain pass that got as high as 4,500 feet and Goldie was crawling. I had to keep on downshifting until I was in first gear and couldn’t even keep up with the semis that were barely making it up the hill.

“What is wrong?” I wondered, when I pulled off the road just for a few minutes while revving the engine, mostly to regather my wits. It was late at night and I was miles away from civilization without a comprehensive assortment of tools or spare parts. It was freezing outside and I had doubts about whether I’d be able to even make it up these darn hills.

I regained my composure after a couple of minutes and Goldie seemed to be running okay enough to at least keep up with the semis again. We made it over that mountain pass, and after that it was pretty smooth sailing, with numerous steep downhill sections.

But I still was making lousy time, more due to getting off to a late start than to Goldie going slow. In fact, I only had a chance to see another friend in the LA area for 15 minutes, before I had to hit the highway again.

A little after midnight, I was still 60 miles away from San Diego but needed some shuteye. I pulled off the highway into a motel.

The next morning I did a little tinkering under the hood and pulled the spark plugs. For years the #2 spark plug had oiled-fouled more than all of the others, but when I saw its condition this time, I was astonished. The entire plug was heavily fouled, and the spark plug gap had been reduced to nil. So that’s what happened up that hill: Goldie was running on three cylinders. I was amazed we even made it that far.

I replaced the spark plug and was ready to complete the last 60 miles that morning.

San Diego was a big contrast to the Bay Area. The weather was gorgeous with temperatures in the 60s. There was not a cloud in the sky and with the top up, I was positively warm. The weather was so nice I had to put the top down. Unfortunately, however, I had left Goldie’s tonneau cover at home to let it thaw out from the ice/snow of a couple of days before, so I folded down the removable top into the empty space behind the two seats. I could have simply detached and removed the entire top, but I decided the car didn’t look as good “naked” like that due to her tan lines that resulted from being left in the sun all these years with the tonneau cover on.

Now all I had to do was find where my friend lived. This wasn’t a major problem, as she gave me rather good directions. Soon I found myself motoring down a narrow alley right by her vacation home, with Goldie’s loud exhaust note reverberating off the houses.

I had driven 1100 miles round trip for 19 hours in my ’69 MGB, just to be in San Diego for two days and 24 hours. Frigid temps were endured, Seven quarts of oil were consumed, and only three cylinders were being used much of the way, but the MGB successfully brought me to see a great friend, a land of sunshine and numerous beaches, and scenic roads to cruise with wind flowing through our hair.

Adventure, smiles, and fun. This is what the MG experience epitomizes. Sometimes I imagine what would have happened if I had been able to drive the contemporary Porsche instead, and the conclusion is always the same: the road trip would have been more bland, and the entire experience less memorable.

It remains to be seen whether I will repeat a similar trip in the MG anytime soon, but if I do, the trip is guaranteed to be an adventure, one in which there would be a story to tell.