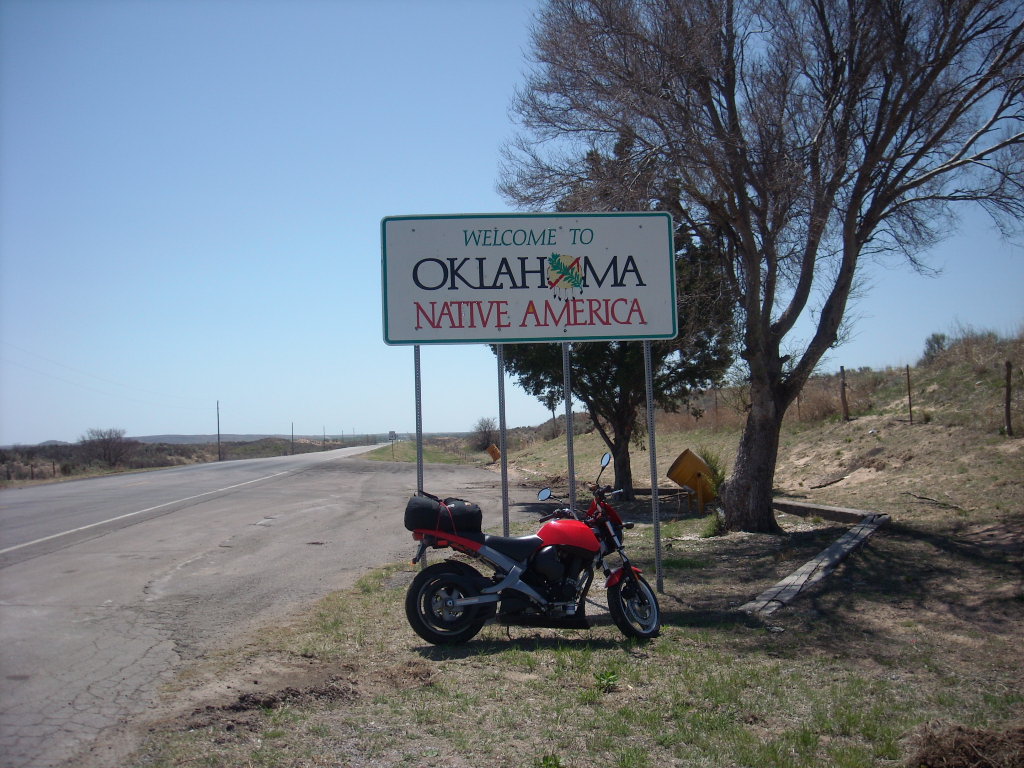 Blame it on Peter Egan, one of my favorite writers and author of Leanings. Or the motorcyclists who kept passing me along the Continental Divide during last year’s Tour Divide mountain bike race as my weary legs hammered away day after day. Or even the folks on motorbikes in the sea of chaos on the streets of Vietnam. I had always wanted to do a long motorcycle trip, and Oklahoma gave me the perfect opportunity to do so.

In the spirit of adventure, a desire to see the rural heartland of America, and for perceived safety reasons, I vowed to stick with country roads and avoid interstate highways as much as possible. I also did not want to ride at night at all, so I gave myself two whole days for each 780-mile leg to/from Fort Collins and Oklahoma City. During the nights to and from OKC, I camped at state parks with my bungeed-to-the-bike-while-riding Sierra Designs Clip Flashlight CD tent and Slumberjack 0-degree sleeping bag, both going nine years strong.

The first day of riding went along uneventfully even though I started riding much later than planned. In some regions of eastern Colorado I noted that (from bank signs) the temperatures soared as high as 88 degrees, but I was pleased that even while wearing my Fieldsheer Aqua Sport motorcycle jacket (sans liner), I never overheated. Nebraska and Kansas turned out to be much less dull, barren or table-top flat than I imagined, and shortly before calling it a night, I stopped by a convenience store and bought a decent, juicy cheeseburger.

For the night, I stayed at Prairie Dog State Park in Kansas, and after (unsuccessfully) looking for P-dogs, saying hello to the geese, eating the burger and setting up camp, I got eight or nine hours of solid sleep.

Day Two was another splendid day of riding. Kansas again did not disappoint, with green open prairies bisected by rolling, sparsely trafficked roads. Shortly after “getting out of Dodge [City],” I made it into Oklahoma which also was surprisingly lush and rolling. Unfortunately, it seemed like the entire day I was riding into a strong headwind, but it was fairly comfortable for me to maintain a tight aerodynamic tuck on the Buell for hours on end.

I was doing a great job of navigation until around the town of Mustang, OK (just west of Oklahoma City), when I had to bust out GPS for the first time after making a wrong turn. An hour later, I checked the GPS unit for the second and last time, and soon I was in Norman and rolling up the driveway of Venus’ parents house where we were all meeting. Success! Almost on time too (I arrived maybe 20-30 minutes after my target time of 7:00 p.m.). About as flawless as a 780-mile motorcycle journey could go.

Part 2: Return to Colorado from Oklahoma

On Monday morning, I hopped out of bed with sore legs from the previous day’s Oklahoma City Memorial Marathon but with a lively spirit, eager to get back on the road. One concern I did have was about potential wind or rain.

Fortunately, the winds had settled down a bit from the weekend, although with the temperatures in the low 50s, I did have to stop around 10:00 a.m. to attach a thermal liner to the inside of my motorcycle jacket. This was my last major stop for the morning until I reached the town of Arnett, OK, just east of the Texas border.

In Arnett I pulled up into the parking lot of a convenience store, reached down with my left hand to turn off the fuel shut-off valve, and… woah! The entire valve popped loose in my hand and petrol was now dumping onto both my hand and pavement!

Apparently, both of the screws holding the valve in place had vibrated loose and dropped out, nowhere to be found. After about 20 seconds of pondering what to do as I held the valve firmly up into its home location on the bottom of the gas tank, I then bolted towards the entrance of the convenience store to ask someone if there was a mechanic on hand.

“Is that gas?” asked a local 20-something man who had just stepped out of his truck and had witnessed the entire fuel-dumping scene. “Sure is,” I glumly—but calmly—replied.

The guy—Trevor—then resolutely walked over to the bike to look at the problem, and rushed home a couple blocks away in this town of 492 people. He returned a few minutes later with a screw, but it didn’t fit.

Meanwhile—as gasoline was still dripping onto the pavement—I resolved that I was going to have to drain the tank so we could fix the problem without highly flammable liquid spewing over our clothes and the blacktop. I ran inside the store requesting a gas can, and emerged with an empty one-gallon coffee can the store clerk offered. It was just large enough to drain the remaining amount of gas in the Buell’s tank.

Trevor and I then drove two blocks in his truck to a little store selling just fasteners (remarkable for such a small town). I first got 40 cents worth of metric screws thinking that “everything automotive has used metric parts since the early 80s” (?), but upon returning to the bike, found they wouldn’t work. However, using one of the screws, I was able to extract one of the threaded inserts from the bottom of the tank, and upon returning to the little hardware store, determined that the screws were Imperial threads.

Returning to the bike with #10-32 screws, it just took another five or so minutes to reattach the fuel valve using a Phillips screwdriver I had in my pack. Problem solved!

After thanking Trevor profusely and buying him lunch, I was back on my way. The sun soon emerged from all the rain clouds of the morning, and it was happy riding all the way through northeastern Texas, the Oklahoma panhandle, and into Kansas. Once again, I camped during the night—this time in the Hamilton Wildlife Area of Kansas, just east of the Colorado border.

In the morning, I rode into Colorado in short order—woohoo!, back into my home state. The temperatures, however, were hovering in the low 40s with grey clouds thicker than a wool trench coat, and my fingers were bone-tremblingly freezing through my well-ventilated, leather motorcycle gloves. This was enough of a problem that at the next convenience store I encountered, I purchased a pair of $3.99 gardening gloves to wear over the motorcycle gloves. The rest of the morning, my digits were not warm but at least they were no longer felt like a frozen bag of peas.

Shortly after noon the Rockies were in sight as I approached Colorado Springs. Yay, mountains! I stopped in the Springs to have a nice Mexican lunch with my friend Lisa, before heading back to Fort Collins 130 miles north.

Highway 85 north of CO Springs with its wide, sweeping curves was an absolute blast to ride, but then I got bogged down in city traffic through downtown Denver. My initial plan was to take CO-287 back to Fort Collins but I never found it, plus I lost a lot of time riding through Denver and at this point was at risk of not making it back home before nightfall. Ultimately, when I saw an onramp for Interstate 25, I took it—riding the highway all the way to Loveland/Windsor. Fortunately, by this time traffic was pretty sparse and having 1500 miles of riding underneath my belt from the last few days alone, I was pretty comfortable riding on I-25.

From Windsor, I took country roads all the way back home, marveling at the crimson sunset hovering above the Horsetooth Mountains to the west. It was a great motorcycle journey, punctuated with home sweet home and sleep in my own bed.

Very cool! I came across this blog searching ?OKC to Denver on a Sportster?! I live in Norman currently and am planning to go to Denver in July. I?m still deciding if I?ll fly, drive, or perhaps ride out there. I imagine it will not be easy on a sporty with its small fuel tank, especially since it would be my first long distance trip on a bike. I enjoyed reading about your journey, in any case. Cheers! ↩ Reply

Hi Iris! That's so cool you have a Sportster and are even considering riding out to Denver!

I rented a Sportster a few years ago to ride the Tail of the Dragon in Tennessee/North Carolina and really enjoyed it.

If you ride out, taking the backroads is definitely the way to go. On my Buell, I had to stop every 100-120 miles for gas, but there were enough services to do so and since I was averaging only about 40-45 miles per hour on the backroads, it was nice to stop for gas and stretch the legs.

I'd love to know how your trip goes! ↩ Reply

I'm buying an adventure bike in Oklahoma City, riding back to Summit County Colorado. Would you be able to share your route? e.g. which cities or which roads you used to avoid i70? ↩ Reply

Awesome about buying an adventure bike in Oklahoma City and back to Summit County! I was just riding through Summit County last weekend for the Triple Bypass bicycle ride.

Regarding the routes I took, they are actually above on this page. Look for "[Route]" underneath the Part 1 and Part 2 headings and click on the hyperlink for an interactive map to gmaps-pedometer.com.