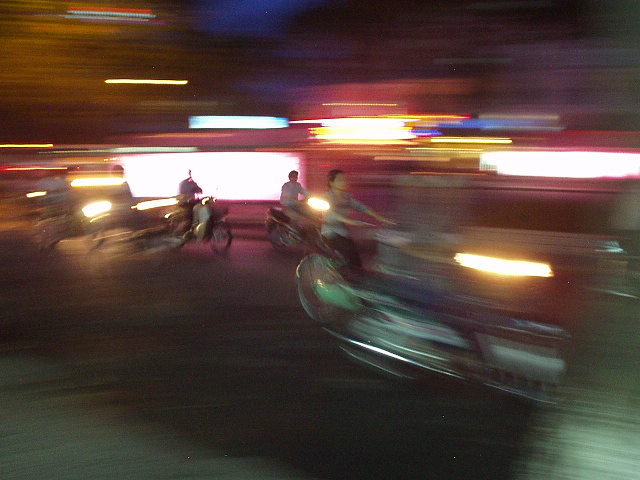 Perhaps Vietnam’s heat had finally gone to my head. Maybe having that bottle of Hue’s rather strong Festival Beer from earlier in the day had impaired my judgment. More likely, the summer doldrums of the last couple of days in Central Vietnam had me craving a little excitement when I returned via plane to Ho Chi Minh City. These are the only explanations for why I would willingly climb onto the rear of an aggressively driven motorbike through the endorphin-crazed rat race of the streets of Saigon over to my designated not-so-close hotel, again.

Actually, I am starting to get good at this. The moment the plane touched down and came to a halt, I leaped out of my chair, tore down my only carry-on from the overhead bins, and bolted through the aisle without waiting for an orderly cue to form just like a true Vietnamese. I raced through the baggage claim area taking out the hotel’s business card out of my pocket, held it in front of me while walking, and waited for the onslaught of motorbike drivers to approach me. The wait, predictably, was only about two seconds before two weather-beaten dudes congregated around me.

I showed the card (with hotel name and map) to each of them and then asked in rapid-fire succession, “To hotel – how much?” The first guy responded “seeven dollah” while holding up seven fingers. I then turned to the other guy, who in turn responded, “five dollars.” Without hesitation, I looked at the second guy and said, “okay, let’s go!” and off we went to his scooter.

The bike was about a quarter mile away, but we covered this distance on foot quickly. Trying to follow this guy was like walking with my dad through a supermarket—expediently, with head down, like a race. As we sped through the airport gates on his two-wheeled steed I noted that this guy’s driving style was much like his walking style.

We weaved in and out of traffic, sometimes passing whole pelotons on the wrong side of the road. We stopped at intersections about as frequently as George W. Bush says he was wrong about Iraq. We somehow squeezed through two-foot openings between cars and other motorbikers without a scratch, nudge, or even the slightest brush.

The sun had dipped beneath the horizon an hour ago, and I got to see the motoring demographics during night in this city like never before. The majority of those on the roads at this hour were Vietnamese in their twenties, some of whom were taking their dates out for a good time. Watching women on the rear of the speeding bikes was both intriguing and mesmerizing. Several of them—in their tight evening dresses and miniskirts—were perched on the scooter seats sideways, with their bare legs crossed, arms folded. They made the experience look rather blasé—even with motorbike drivers (such as mine) coming within two feet of them at alarming speed—with nary a look of concern on their faces.

Even more attractive were the young ladies driving their own bikes. There’s something about a girl motoring along in her high-heels shifting through the gears, long dark hair flowing in the wind, exhaust note rapping behind. I’ve always thought that about women in roadsters and the same applies to girls on motorbikes.

As the name “Hai Long I Hotel” came into view and the motorbike driver smiled as if to say, “I found it!” I regretted that the 20-30 minute journey wasn’t any longer. Far from feeling any fear this time around, the images of dames on motorbikes would haunt me for the rest of the night, a nighttime of excitement in the streets of Saigon.