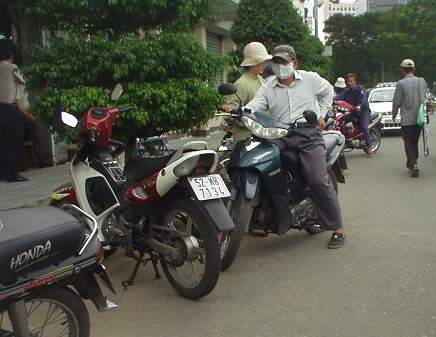 Considering this warning, I lifted an eyebrow on the Vietnam Airlines jet from San Francisco to Saigon when in the corner of my eye flashed an image of a stripper on the LCD screen in front of the Vietnamese gentleman on my left. Starting out in a mini-skirt, the well-endowed woman peeled off her top to reveal a bikini, did a little wiggle, and threw off another piece of clothing or two like the newspaper boy tossing the Daily Times. The next thing you know she was wearing only two strategically placed tassels in places I’ll leave up to your imagination.

“Hmmm, that looks a little more interesting than the Ice Age 2: The Meltdown movie I’m watching,” I briefly thought, wondering what channel my neighbor found his program on.

Other warnings I had read before coming here included this little piece in Culture Shock!: Vietnam:

Customs officials check all goods brought into the country, whether by air or sea. All pornography and politically oriented or culturally unsuitable material is banned. Videos, compact disks, cassettes, books, computer disks are taken for censorship. This usually takes two to three weeks and all approved items are returned to you in good order.

I was a tad surprised to see later that week, then, that there are whole channels on Vietnamese TV devoted to just American movies and videos. One somewhat explicit video was that of Sheryl Crow and another one was Olivia Newton John’s “Let’s Get Physical” (which was almost censored in some parts of the U.S. in the early 80s for its suggestive lyrics). The Hollywood Channel featured a Cameron Diaz flick where all she does shake her bootie, pose in a compromising position, or wear a two-piece bathing suit. Or doing all three.

The biggest eye-raiser, however, was walking into the bathroom of my Hai Long I Hotel room in Saigon this week and seeing what is pictured below. The photo on the wall was not put there by myself, not that I can object.

I am an American living in Ho Chi Minh City. I was expecting the conservatism as far as dress and all. Actually the standards here are quite lax when compared to Indonesia or Malaysia. I think my biggest shock was seeing the more recent version of "The Thomas Crown Affair" on VCTV1 and all the nude parts were retained. And this was at 1:00 in the afternoon--on a station that broadcasts over the air (I didn't have cable then). HBO, Cinemax, and the Star Movie Channel do not show anything like that here (their signals must go to some really conservative countries!) They are generally pretty good about regulating language (my biggest complaint with Hollywood is that it seems if they don't have enough time to fill up a movie, they load it with profanity!)

Movies in the theaters here are generally shown uncut. ↩Reply