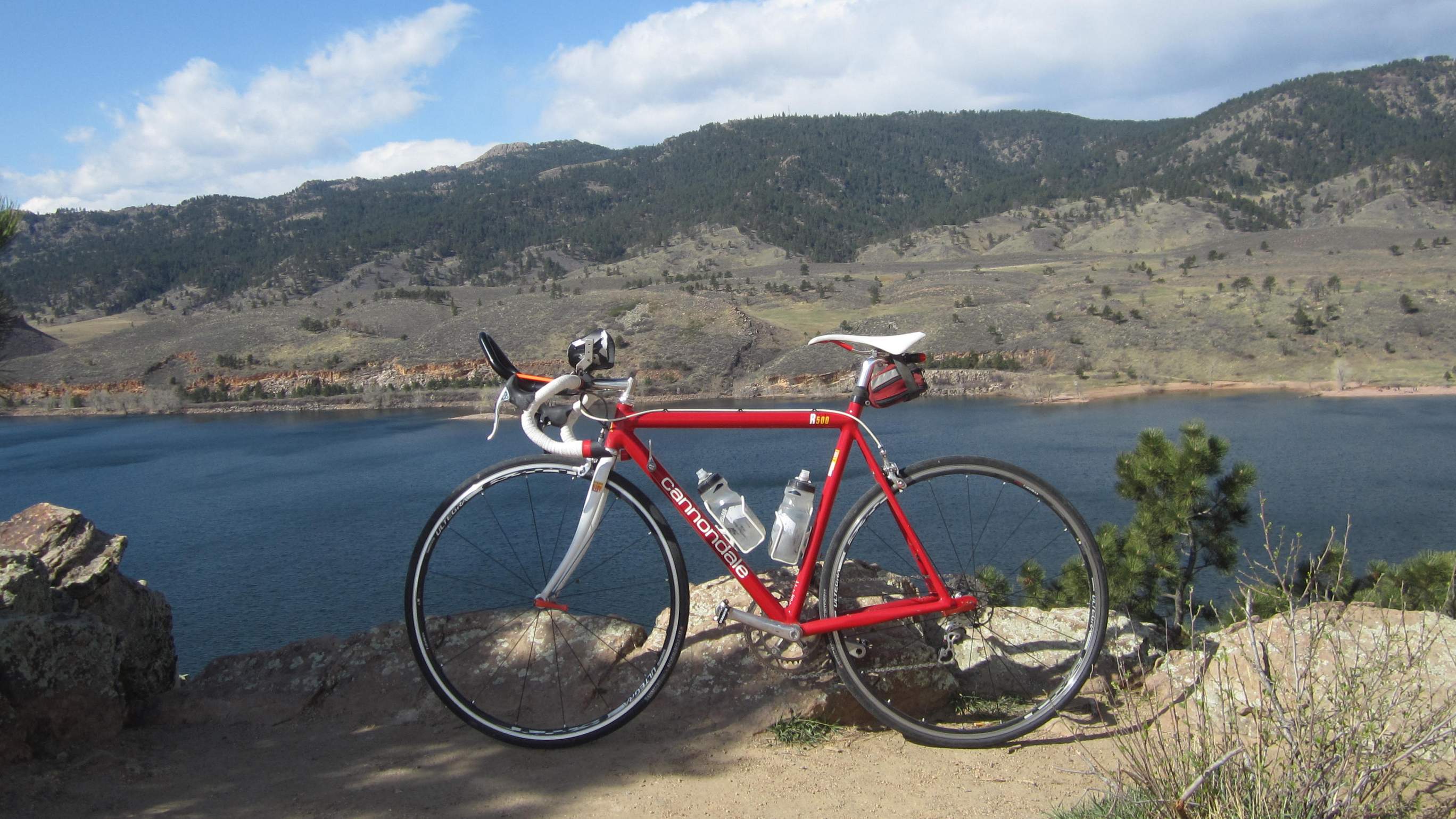 The original plan for my first endurance ride of the year was to ride the Rocky Mountain Cycling Club’s Horsetooth Hop 122km populaire. But when I got to the park-and-ride in Johnstown—the official start start—at 7:30 a.m., there was no trace of lycra-clad humans around. I then biked five miscellaneous “warm-up” miles before returning to the start by 7:55 a.m. Still no sign of anyone.

So I took off and biked entirely solo. And that this how I came about to ride a self-supported century which I would later dub the Johnstown-Horsetooth-Wellington 100.

I pedaled at a reasonably casual pace through Loveland and Masonville until I got to Horsetooth hills. To my surprise and delight, on Centennial Road there were many runners from the Fort Collins Running Club who were doing a training run on part of the Horsetooth Half Marathon course. I was not expecting to see many out there because I thought the training run started at 8 a.m.; maybe they got a much later start than I expected. Whatever the case, I saw my friends Tammy, Amber, Nora, Alex, Cat, Celeste, and Nick on the road.

Nick—the race director of the Horsetooth Half Marathon—was driving his yellow Nissan Xterra (nickname: “the Banana”) to flag the miles of that race. He must have recognized either me or the bike because shortly after he passed, he stopped on the shoulder so we could chat.

“Enjoying the wind?” Nick asked. The air was indeed getting gustier. As I wrote a few weeks ago, it can get very windy in Fort Collins.

Thirteen miles later, the course went right by my neighborhood. So of course I stopped by my house, if only for a few minutes. I ripped open a protein bar and chased it down with a glass of milk before heading out again. It briefly crossed my mind that maybe I should wait a few hours for the wind to die down, but I rejected that thought pretty quickly and was back on the road.

Maybe I should have considered that idea more seriously.

About a mile later, I decided to make a 20-mile detour from the Horsetooth Hop Populaire route to Wellington in order to make the ride an even 100 miles. Immediately after turning left to head north on Giddings Road, I was literally blown off the road. Fortunately, I was able to brake and jump off the bike in time before crashing or falling to the ground. That was my first close call with violent wind gusts. But it would not be the last.

After going through Wellington and a bit beyond, I crossed Interstate 25 and was riding on the frontage road. By that time the wind—coming from the west—was at least 25 miles per hour. All of a sudden, I saw a huge piece of foam insulation—about the size of a gas oven—barreling across the highway. It somehow missed all of the cars like in a game of Frogger, and then missed colliding with me by only a yard.

By that point I was much better about leaning into the wind while riding south. I made it through Windsor before my next close call. A lawn-tractor-sized tumbleweed rolled right across my path and I had to swerve in order to avoid it.

I thought I was almost home free with only five miles to go when I encountered a cyclist on the side of the road holding his rear wheel to the level of his nose. “Have everything you need?” I asked. The rider indicated that he could use some assistance. For example, he could use some tire irons. His tubeless tires otherwise could have been very difficult to remove.

He mentioned that since switching to tubeless tires and sealant he had never had to fix a flat on the road. I concurred, having the same experience.

He then made some comments which indicated that he knew that I was riding the roads of the Horsetooth Hop Populaire. He apparently was too.

“That’s funny, because I did not see anyone at the start,” I remarked. The cyclist, named Scott, replied that there were at least a dozen that started at 9 a.m. “Oh, I got the time wrong,” I realized.

After he fixed the flat, I was back on the road. With only five miles to go, the end of the ride seemed very near, but then I had to turn right and directly into the wind. It was like rolling into a glass door.

In fact, I was barely able to maintain eight miles per hour into the headwind. Then came a couple of short hills.

A particularly steep incline came with one mile to go. I had not shifted the front derailleur onto the small chainring the entire ride, and I was not going to do so now. But that decision meant I really had to dig deep because of the headwind. Fortunately I was so close to the end, because I was completely blown from that effort. Ha.

I made it to the car with the Garmin Forerunner 35 reading a satisfying 100.3 miles.

This was definitely one of the top three windiest rides I’ve ever done. But it made for quality training at the start of the cycling season.