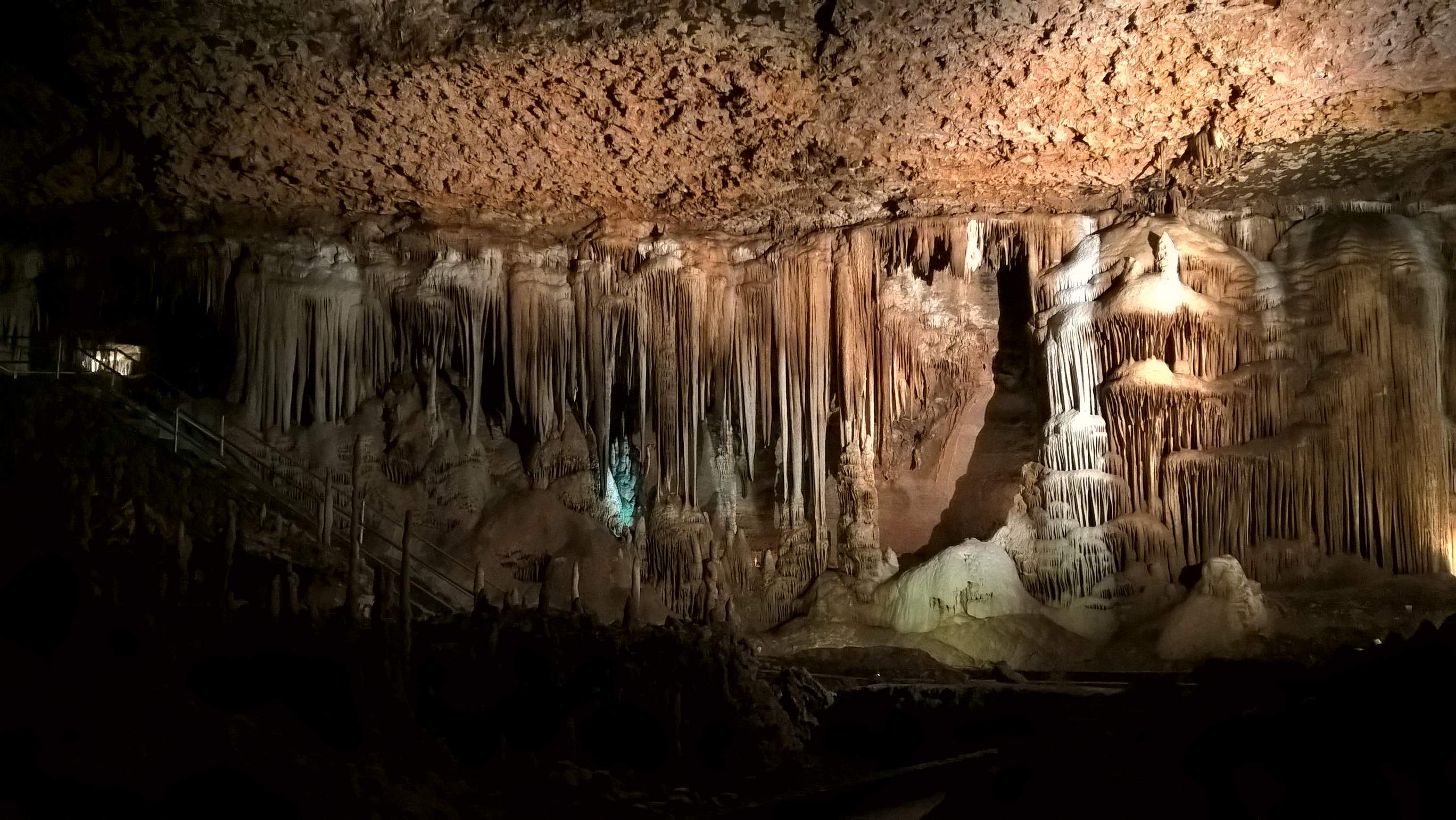 Immediately after the Mission Run in the Ozarks Marathon, I was gushing about how beautiful the course was with Christy, one of the organizers of the race. She concurred and then mentioned something about Blanchard. “There are caverns over there,” she said.

By coincidence, Maureen and I were talking about possibly exploring some caves during our trip to the Ozarks. We had not figured out where yet, but the proximity of Blanchard made it an excellent candidate. So after driving the marathon course so that Maureen could see all the hills I had run up and down, we stopped by the Blanchard Springs Recreational Area.

There we purchased some tickets for a one-hour Dripstone Tour that was to begin in half an hour, giving us time to hop back into the car, drive over to the trout lake, and marvel at the magnificence of the waterfall. While the latter wouldn’t be compared anytime soon to, say, the grandiosity of Niagara Falls, it makes the Horsetooth Falls in Fort Collins look more like the Horsetooth Trickle or the Horsetooth Drip. In any case, it elicited at least one “oooh” from myself.

Then we went back to the caverns and commenced the tour. The tour group was comprised of about twenty people and led by a tall, enthusiastic, young man with a southern drawl typical of literally everyone we talked to in Arkansas.

The guide laid down some ground rules, including not touching any part of the natural formations because this was a “living cave” and human oils would interfere with the natural processes of erosion and growth. We then walked into the upper cavern of this three-level cave system, which was several hundred feet below ground and now has a system of fully paved trails so that we would not have to get down on our hands and knees and crawl through claustrophobic spaces like the original spelunkers of this cave.

Locals first learned about the cave system in the 1930s, but it was not fully explored until the mid-1950s. The guide told a story of citizens sending a teenage boy through a small passageway to the cavers, whereupon popping his head out like a gopher, he could tell the cavern was huge (even in pitch darkness) simply from the echos. (In fact, the Blanchard Caverns are the most volumous in the state of Arkansas.)

The caves were then developed for tourism—including the construction of the aforementioned paved trails, metal pipe railings and wood, stadium-style benches—and opened to the public in the 1970s. Lighting was designed by a famous opera house illuminator, who had never worked on lighting in a cavern before. After it took him six months to complete the job, or four-and-a-half months longer than he originally thought it would, the light expert said he “never again” would take on such a contract.

As you would expect in an underground cave system, there was a lot of stalactite and stalagmite, or conical mineral deposits, usually calcite or aragonite, built up on the ceiling and floor of the cavern and formed from the dripping of mineral-rich water. These caves were carved out by water in the nearby springs, but nowadays you can only hear a few water drips here and there.

In addition to the absence of spring water gushing through the caves nowadays, there were no bats inside as they had mostly left 200 years ago. There were, however, many large piles of dark bat dung that neither fully decomposed nor gave off a strong enough stench to be sensed by my poor olfactory cells.

After we had walked approximately 0.4 miles and our hour was up for the tour, the guide gave an impassioned plea to tell people about this cave system—the only operated by the U.S. Forest Service. He said said that it is still relatively unknown “and we don’t want it to be.”

He needed not ask twice—I can wholly recommend stopping by the Blanchard Springs Caverns if you are even remotely near the area. An adult tour ticket is only $10.50 and is well worth seeing. In addition, checking out the waterfall, springs, and trout lake are all free.

Below are some photos to whet your appetite for such a trip.