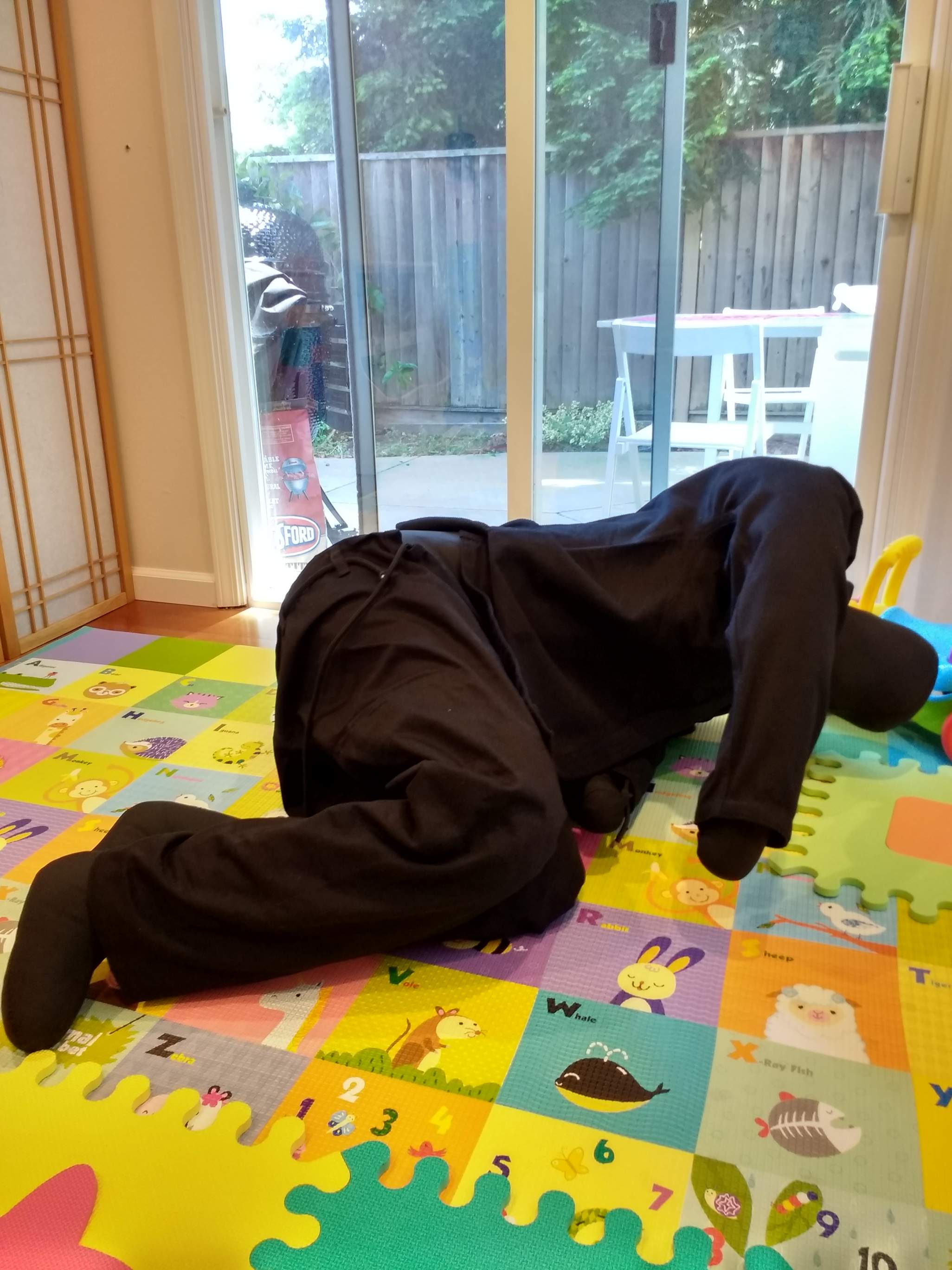 I was at my brother’s house in California to celebrate our dad’s birthday when a nephew came walking through the front door. My brother took him aside to tell him some exciting news.

Let it be known that, no, my brother was not referring to me or any other member of the immediate family, but rather, an actual dummy. One that was life-sized and weighed upwards of 90 pounds. It was sort of like one of those bald, plastic dudes you see in the crash test videos for cars, except it was softer and not naked. Instead, it was dressed more like a ninja.

Surprisingly, my pre-teen nephew—who is some sort of taekwondo expert—did not seem to take much interest in it, but at least my cousin Konrad did. Konrad, you see, is a bona fide jiu-jitsu master. He even has a dummy himself, except unlike my brother’s, his is homemade. My cousin made “Rupert” out of pool noodles and buoys so as to save many hundreds of dollars on buying a “real” dummy, since he himself is no dum-dum. But I digress.

Anyhow, Konrad was kind enough to demonstrate some jiu-jitsu moves on the dummy since my brother is starting to learn the martial art. Let’s say that the unnamed dummy (“Rupert’s cousin”?) did not stand a fighting chance especially since it could not stand up.

Besides visiting with family during a very good, if very brief, weekend trip to to northern California, I met with several old friends.

First, I met with Stan who—along with myself—was one of the original members of my Spanish conversation group in Fort Collins, now in its 11th year. Stan (or “Están” as Latinos like to call him because no words in Spanish begin with ‘st’) moved to Fort Collins from the San Francisco Bay area about a year after I did, but never really got comfortable in the Fort. The town, while progressive, had a few too many Sarah Palin supporters for Stan’s liking.

Then there was the issue of the weather. Having grown up in the northeast with memories of trudging to school in deep powder, Stan detested snowflakes in any quantity and was repulsed by the episodes of what he would call skyarrhea falling from the sky. Never mind in Fort Collins it only snows, oh, a dozen or so times a year and brings a nice change of color (or lack of). After living in Bay Area for a couple decades, he could not understand why anyone would want to deal with the white stuff for even one day when there were perfectly civilized places to live without it.

So a few years ago, he moved back to northern CA. He resides in midtown Sacramento now, so I went to visit him at his new casita. He has a great vegetable garden going—he always had something of a green thumb—and was in the process of installing an air conditioning unit in a little space that he is making an art studio. He walks or rides his bike everywhere—his car usually moves only every two weeks or so—including to a gym and his favorite bar. He seemed really happy!

By sheer coincidence he lives only six miles from where I was meeting with old friends from high school, all of whom I had not seen in at least six years. Somehow, all of them except for Ken—the same Ken I rode my very first century ride 24 years ago—ended up in Sacramento. Well, I suppose it isn’t a huge surprise we all left Stockton.

Speaking of Stockton, from this meeting, I learned that its notorious ex-mayor—who was recently arrested for a bunch of felonies including embezzlement, money laundering, and misappropriation of public funds—was in our high school class. (Last year he was also arrested on charges of playing strip poker and serving alcohol to minors while mayor.) I never knew this fine gentleman, but apparently my friends did.

Fortunately, the city now has a new mayor, one who is 26 years old. At least he is Stanford-educated. Stockton is saved!

At the very least, it appears that the city government of Stockton (which, before Mr. Silva was mayor, was the largest city in the United States to declare bankruptcy) is not being lead by a dummy anymore.