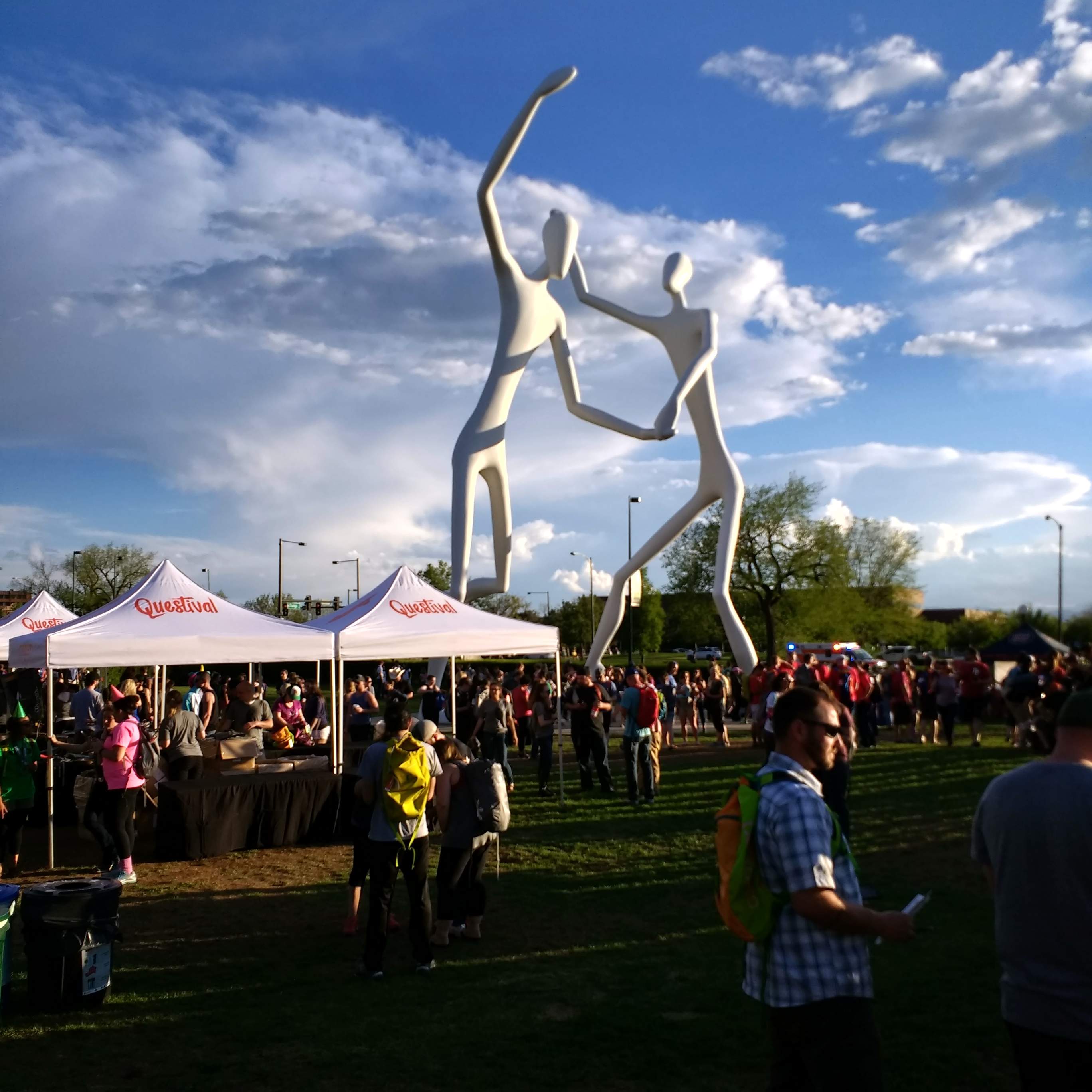 Nom nom nom nom nom were the sounds emanating from my mouth as if I had suddenly transformed into the Cookie Monster. But I was not munching on doughy, sweet chocolate-chip goodness, a round morsel of oats and raisins, or a sugar cookie. Instead, I was gnawing at a cauliflower head in the manner I would an apple, which was something of an achievement considering the crucifer was the size of a bowling ball.

Now, while I typically try to eat clean and healthy, it’s not that I had become a raw-foodist or a vegetarian. Instead, this was one of the challenges of Cotopaxi’s Questival.

This task was worth three points, one I would classify as easy-to-moderate difficulty. Just as well; I had assured Maureen the day before that we could take it easy in this scavenger-hunt-like adventure race despite my usual competitive ways, particularly because she was recovering from a cold. And there were only two of us. But first, a little bit of background.

I first heard about Questival during a short session of one of the world’s foremost time-wasting activities, by which I mean, of course, browsing Facebook. This event immediately caught my interest, especially the part about “doing a 24-hour adventure race for the cost of a 5K run” ($35 for early registrants). That certainly appealed to my frugal side, being used to seeing registration fees for marathons be around the $100 mark, adventure relays being around $160/person, and Ironman triathlons over $600.

There was also the non-solo aspect, as participants were required to participate as part of teams of two to eight persons. “No problem,” I thought, “I know a ton of adventurous people who would be up for this.”

Unfortunately, that was my first failure in this event: I could not rally anyone to do this except for Maureen. Everyone, it turned out, had some sort of More Imporant Thing to do that weekend, such as work, being in distant lands for vacation, or graduating from university. Why someone would want to walk down an aisle to receive a piece of paper instead of gobbling pieces of cauliflower is beyond me, but I suppose everybody has their priorities.

Another thing my absent friends missed out on was the total barrage of advertising Maureen and I received from Cotopaxi—the creator of Questival—in the weeks after signing up. They, therefore, probably still have no idea who, what, or where is Cotopaxi. I, admittedly, did not either before the event, but all the email spam that clogged the Inbox rectified my ignorance.

Cotopaxi, it turns out, is a relatively new company that makes outdoor gear. You could liken them to LL Bean or Eddie Bauer except that they seem to be trying to posture themself as more hip and benevolent. They even have a motto of “Do Good” and a mascot of a llama. And they have a smarter marketing team.

I say that because it quickly became apparent Questival—in addition to being a bona fide fun event—was one of the world’s most brilliantly conceived marketing campaigns. In addition to acquiring email addresses from the thousands of people who sign up for the race, Questival gets people excited to do imaginative, crazy stunts that they’d want to share with friends on their social media accounts. (Questival, by the way, is held in dozens of other cities in the United States besides Denver, during different times of the year.)

There were also borderline sleazy challenges where you could earn points for following Cotopaxi’s Facebook, Instagram, and Twitter pages. Maureen doesn’t have an account for any of those platforms, so it was up to me to do the “liking,” which I did in the name of gaining three measly points for the team.

There were also a few challenges that required posting a photo of the challenge to social media, and then taking a screenshot to upload to the Questival Android or iOS mobile app during the event, in order to be awarded points. Which leads me to describe another handicap for our team: we only had one phone we could upload required short videos and photos on, as Maureen was the world’s last Windows phone holdout as even I, a self-professed Microsoft fanboy, had switched to Android full-time a couple months ago. The limited bandwith of only one phone slowed us down a little bit.

A third handicap—in addition to the dearth of team members and phones—was one of organization. Due to having More Important Things to Do of my own the week before the start, I didn’t get a chance to look at the 247 challenges in advance despite Cotopaxi sending them out to teams 24 hours before Questival and therefore was only creating a spreadsheet prioritizing them during the race (which hogged up at least half-an-hour on its own). Whoops.

Ah well, like I said, we were going to take it easy.

Anyhow, below are the challenges that we, Team Cowabunga!, ended up doing. (Why Cowabunga!, you might ask? Because it seemed like most of the other teams were coming up with names based on Cotopaxi’s mascot of a llama, such as Llama Mama or Dolly Llama or Como Se Llama, and we refused to do any more shilling for this Cotopaxi company than we were already doing by participating in this Questival. Cowabunga!, at least, conjured the image of bovine. Maureen actually wanted our name to be a haiku of “an animal that the haiku would initially suggest a llama but ironically end with a cow” but that became a little too impractical, not to mention required using too many brain cells.)

There were a whole lot more challenges we could have done that I was looking forward to, such as successfully kicking a field goal from the 15 yard line using your left foot, performing your best pencil dive off a high dive into a pool (12 feet or higher), swimming 200m continuously, and doling a belly flop at a public pool. Alas, we ran out of both time and energy. Cauliflower doesn’t have that many calories, you know.