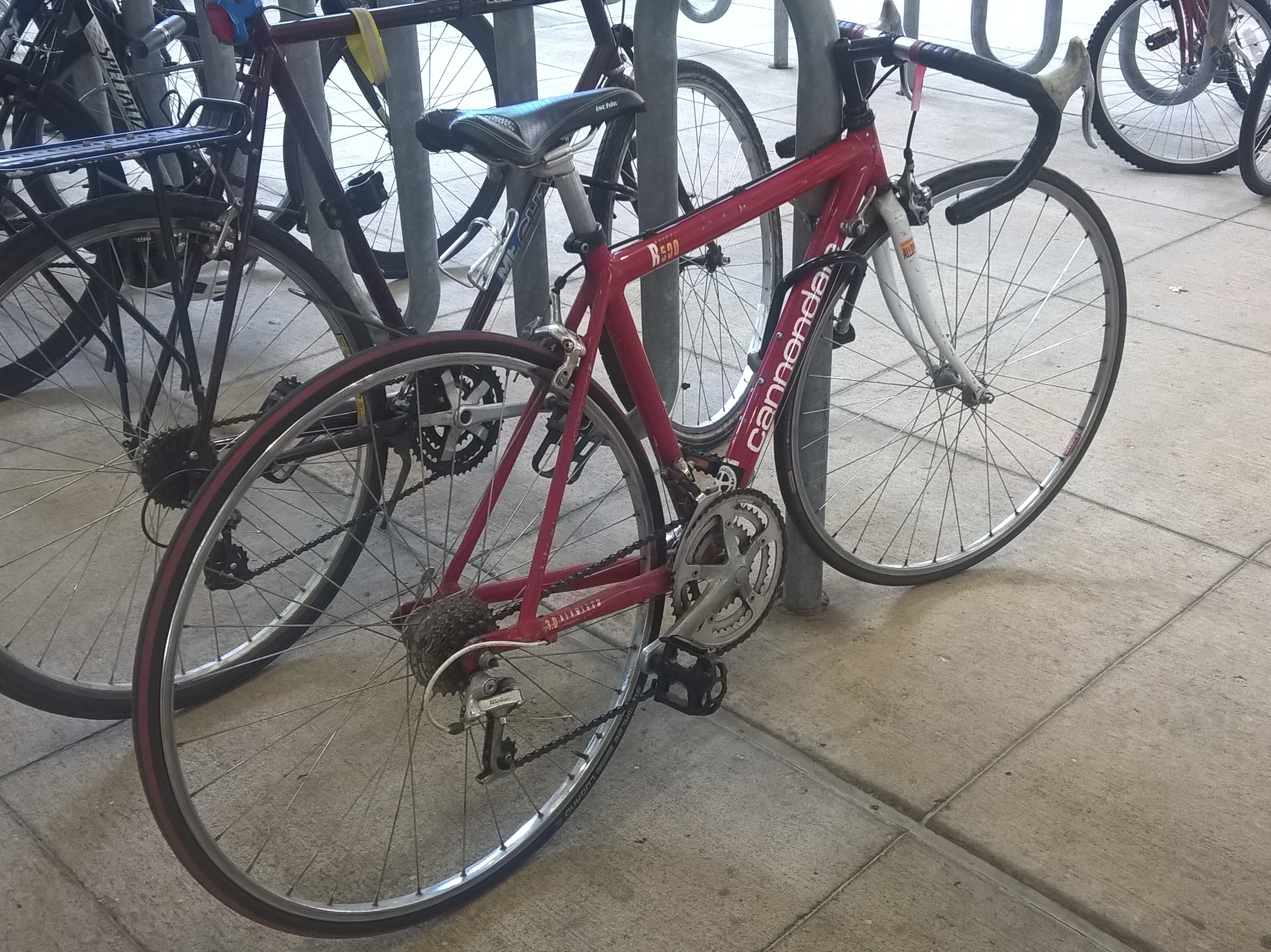 Cannondales, especially newer ones, are not exactly a rare breed. Tune in to any Grand Tour like the Tour de France, for example, and you would spot them in the peloton beneath some dudes with massive quads. You do not even need to turn on the tube to encounter one of these oversized aluminum or carbon beauties; likely, at least one buddy of yours may be pedaling an example in your local club ride.

Yet my now twenty-four-year-old Cannondale R500 with red 3.0 frame and white aluminum fork is still unique enough that I always do a double-take when I see one. Since purchasing it in 1993, this has only happened, oh, four or five times. The feeling is similar to when I once met someone who was using a Nokia Lumia 900—the very first smartphone I had—sporting a striking unibody polycarbonate design and gorgeous Windows Phone 7 “Metro” user interface that never gained much traction in the marketplace but was nevertheless capable and delightful.

The most recent rendezvous with the twins, triplets, and quadruplets of my Cannondale R500 (affectionately called Canny) was in Central West End in St. Louis. I was walking through the Medical Center of Washington University when the unmistakable paint scheme and smoothed, filleted TIG welds of this classic made me crank my head around. Upon my second pass of this bike U-locked to a commuter bicycle rack I snapped the featured photo of this post.

It’s almost exactly as how my Cannondale 3.0 was configured when I bought her brand new, including the polished silver Shimano R500 seven-speed components, downtube shifters, triple crank, seatpost, Suntour front derailleur, white brake hoods, black stem and headset. The differences were the following:

I’m actually amazed that this bicycle still has so many of its original components—much like the 60-centimeter Cannondale R500 I saw in Fort Collins in 2013. The only OEM parts Canny has after nearly 35,000 miles are the frame, fork, and handlebars as I had replaced everything else.

There must be more red and white Cannondale 3.0s out there. If you have one, please drop me a line or leave a comment below.

Thanks to William Tsui for sending me a photo of his former red Cannondale 3.0—from Hong Kong no less! His explanation of how he acquired the bike is below.

I had had a red Cannondale which I bought in 1993 in Hong Kong. The shop, Flying Ball (the shop that got Scotsman David Millar into bike racing), built the bike with a CADD 3.0 frame. And I remember I spec’ed full Ultegra components, Mavic Open 4CD rim, Michelin Hi-Comp tires, Turbo saddle on it. Unlike Canny, it has red fork. Unfortunately I sold it in 2007 because I found its ride too harsh. I did not take many pictures of it. There are some low resolution pictures and a very unflattering pic of it being a resting place for clothes hanger (my mom did it).

About Millar, if you read his book he did mention Flying Ball bike shop. He was a teenager living in Hong Kong at that time when his father was pilot for Cathay Pacific. He attended high school in Hong Kong.

My riding buddy also had a red Cannondale. I am not sure whether it was CADD 3.0 frame though. He bought it in 1992 at Flying Ball and as you can see, it used downtube shifters (my bike has STI). He said it had a mix of Campy, 105 and 600 components. He sold the bike some ten yrs ago.

Canny has many siblings.

It looks the same size as mine (53 cm) but has a red fork and seat collar. It also has “Handmade in the USA” on the seatstay and lacks the model number on the top tube.

We should start a Canny club and do rides. https://flic.kr/p/a6Qo9h ↩ Reply

Hello. I have a cannondale r500 3.0 aluminum. And need to replace some pieces. Where do you guys order your parts from? Thank you ↩ Reply

Hi Sandy. Thanks for stopping by my blog and for your comment; it?s great to hear from another Cannondale R500 owner!

I get most parts from eBay nowadays aside from things like cables, which I get from local bike shops.

What parts are you looking to replace

Hi! Love your post on the red and white R500. I sadly sold mine off about 15 years ago and have regretted it ever since. Question, mine also had the Suntour front derailleur, something i found odd then. Was this common on that year? The original catalog specifies it should be the shimano 100 matching everything else. ↩ Reply

Hi Andrew. Thanks for your message; itvs always great to hear from other Cannondale 3.0 owners!

I don't know why the Suntour derailleurs were used, but every 3.0 R500 I've seen has had one. They were common for sure in Cannondale's lineup. ↩ Reply